Nothing as mysterious as a fact clearly described

Tab and I took the kids camping this past weekend at Beverly Beach just north of Newport. On the drive home we decided to go the long way. We followed 101 south along the rugged Oregon coast. Beautiful! The road was steep and windy until Florence where it flattened and came inland along the wide beach. From there it was an hour drive east to Eugene.

When we got home I sat down to have a look at our local Sunday paper. In the Commentary section was an article about an incident that happened just over 30 years ago, June 16, 1979, in Florence where I'd just been. Forty one whales came out of the ocean and died on the sand. 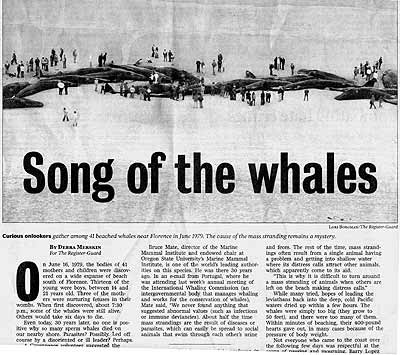 Sunday's Register-Guard article
with 1979 photograph by Lori Borgman
If this story sounds familiar, it's probably because you've seen this photograph: 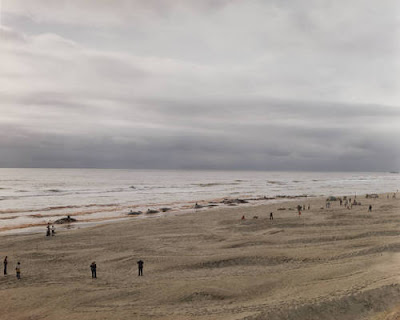 Approximately 17 of 41 Sperm Whales That Beached and Subsequently Died, Florence, Oregon, June 1979, Joel Sternfeld
Like many of Sternfeld's photographs, this one (along with the very descriptive caption) begs many questions. What made the whales beach? What's going to happen to their bodies? How did Sternfeld stumble on this scene? Why 17? Why not 19 or 8? What was Sternfeld thinking? Why is he so far from the whales? What's the context of the photograph?

As someone who'd always wondered about the image I looked forward to reading the essay. It's not very often I get to dig up old dirt on a famous photo. Maybe the article could provide some background.

But sadly it didn't offer much (although learning the actual date was nice). The author explored possible explanations and talked about the general tragedy of whaling but couldn't offer any concrete answers because none have been established. The cause of the beaching is still a mystery.

Thirty years later Sternfeld's strange photograph of approximately 17 of 41 sperm whales that beached and subsequently died remains probably the best description of what happened that we'll ever have.
Posted by Blake Andrews at 7:36 AM

Unfortunately all 41 Sperm Whales died there on beach just south of the Siuslaw River's South Jetty. They beached the night of Saturday June 16, 1979. I lived close by on Hwy. 101 and was there Sunday the 17th about 9 am. When I got there there some already dead and before the day was done all 41 Sperm Whales were dead. I was there until almost 3 pm and only a small number were still alive. Some said 3, some said 5 or 6, but all did die and autopsies by Marine Biologists began on Monday the 18th. While I was there marine and mammal scientists were motioning the whales vitals, drawing blood samples, recording the sounds the whales were making and measuring them. All the whales had been numbered and all the information for each whale was being logged under it's number whether alive or dead. All the whales were burned in pits on the beach and buried after autopsy and heads were removed for further study and to secure the ivory teeth. It took from Monday the 18th to the next Saturday the 23rd to get it all done and buried so you couldn't tell what had happened there. Oregon State Police and were on scene from the night of the 16th until all the cleanup was done on the 23rd. County Sheriff Deputies also helped secure the scene the 18th through the 23rd and the entire area was closed to the public the 18th through the 23rd.

Yes, I was there also. I was rather fascinated with the guy that was numbering the whales. I followed him as he "numbered" each of the whales with a long pole that had a very sharp knife attached. Each "number" was a gash about 2 inches deep and about 12 inches high. I was happy to experience such a scientific day.