I've been having fun lately with Andre Michelle's Tonematrix. The site offers a blank 16 x 16 grid representing a musical score on which the x axis is time and the y axis shows ascending notes in three five-note octaves. By filling in squares one can create simple repeating songs that are quite mesmerizing. The rest of this post will make much more sense if you take a moment now to visit the site. Click on a few squares and watch what happens (making sure to have your computer sound ON).

I've found that it's virtually impossible to create an ugly song. You can enter a whole slew of notes completely at random and wind up with a nice mix of chords, interplay, and syncopation. I've entered designs, blocks, letters, figures from Conway's Life. Each one has a unique song that's surprisingly euphonious (and, perhaps unsurprisingly, monotonous).

Curious about the photographic implications, I began playing around with b/w square photographs as the root of my designs. The first was Nancy Rexroth's A Woman's Bed, Logan, Ohio, 1970: 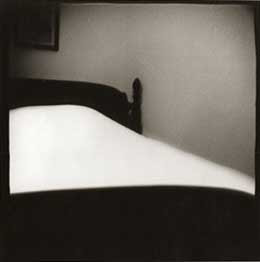 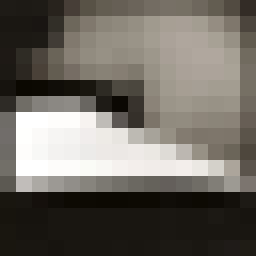 Saved it as a two color gif...

Then copied the pattern into Tonematrix... 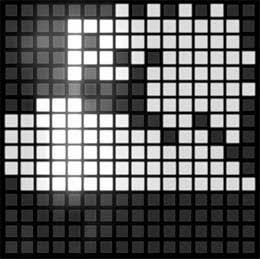 Next up was Arbus' Young Brooklyn Family Going for a Sunday Outing, 1966:

As you can hear, each image generates its own song which isn't quite the same as any other. I think they're a bit like audio fingerprints or whale songs uniquely keyed to the individual.

Beyond that fact I'm not sure what significance they may have. I thought about creating a quiz in which I'd have people guess an image after hearing its song but quickly realized it would be impossible to solve. For color photographs I can imagine other possibilities like a 3D graph with color representing multiple instruments across the z axis.

I think perhaps these audio clips are best appreciated as bizarre little experiments just weird enough to be of general interest.
Posted by Blake Andrews at 2:00 PM

Wow, so interesting!!
I will go and check what music my pics make!!!

That is interesting stuff. It is more a musical transcription of a visual information though (rather than a transformation), not unlike a music sheet is. But that is an interesting effort.