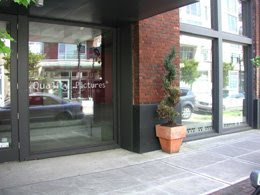 I was sad to see Portland's Quality Pictures go belly up last week, and quickly too. According to Alexis Pike who had photographs in the most recent show artists were asked to pick up their work just a few days before the locks were changed.

QP covered a part of the photography world that the city had been missing and it's hard to see how that void will be filled. If Blue Sky focuses on "emerging" photographers and Hartman on established vintage prints, nearby QP had the Los Angeles angle, treating art as an inscrutably precious commodity sold for thousands in white walled backrooms. Every time I walked in I felt like I'd been transplanted to some undisclosed cutting edge location. Was I still in Portland? QP wasn't necessarily concerned with photographs as much as with Photography capital P, subsection of Art capital A.

Last fall I heard gallery director Erik Schneider lecture on the dynamics of selling photography. It basically confirmed my suspicion that the art world is a confidence game. Prices and publicity are not necessarily a function of quality but of buzz. The more buzz someone has, the more they can charge for a photo. How someone gets buzz is anyone's guess, although hard work and luck are not insignificant components.

The graphic below shows one of the lecture handouts. Everyone gets a ranking based on age and promise. The market determines the rest. I think anyone who hopes to get rich from photography will find the graphic useful. For the rest of us it's still amusing. 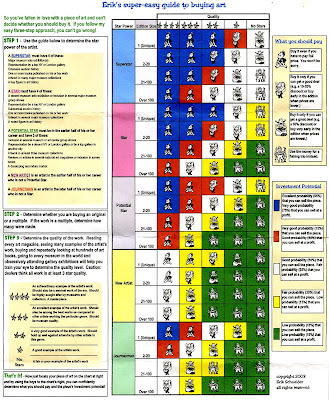 From what I can tell Schneider saw his job as generating buzz and feeding off of it. He wanted to bring to Portland people who'd made a name for themselves while helping Portland photographers work their way up the ladder. Although Hartman and Blue Sky are both adequate for these purposes, I don't think it's their primary motive the way it was for QP.

In its brief 2-year run QP showed a pretty amazing array of, well, quality pictures. David Hilliard, Oliver Boberg, Roger Ballen, Vic Muniz, Brian Ulrich, Jason Fulford, Chris Verene, etc. These are photographers you usually see in magazines or online. To nose up to real prints on the wall was a treat. But alas, in order to keep showing artwork like that there needs to be someone out there buying them, and at $5000 or $10,000 a pop that market is limited. In the end the whole setup proved to be just one global financial meltdown from financial meltdown. R.I.P. QP.
Posted by Blake Andrews at 1:45 PM

Not surprised, or too upset, to see QP go. Yes, we were able to see some good work that otherwise might not make it to portland, but only a few shows really seemed like they were curated by the gallery (particularly the group shows that involved locals like alexis pike and shawn records). Most of it seemed like it was being shown only for possible sales, because some trendy consultant in LA said "this is hot." Of course it's sad for any photo venture not to succeed, but I got the feeling this place was just trying to capitalize off the higher status of photography in the current art scene, instead of enlightening audiences with great photography simply out of passion for photography.

I agree with all you've said. I'm still sad to see it go. The more places that show interesting photos the better.