I used to send and receive letters in the mail with some regularity. About 10 years ago email began to supplant snailmail and I did less of my correspondence through letters. At this point the conquest is complete. Email is king, and it's quite rare that I send or receive anything physically handwritten.

The one exception occurs annually around this time of year when holiday cards go out. For a week or so, the mailbox becomes personal. We try to get a holiday card out to all the folks in the Rolodex, and in return we receive updates from afar.

Kids change quickly. If you haven't seen a certain child in a while, since the last holiday card for example, then you'll be amazed how old he/she looks now. A photo of an adult doesn't have the same effect. What's even more amazing is that generally the older a child gets, the more his/her parents features begin to come out. There are certain long lost friends we haven't seen in years. Maybe I've never even met their kids. But when I look at the holiday card, Holy Cow! It looks just like X. A simple observation I know yet every year I am blown away as if this were a new discovery.

Holiday photos are beautifully accurate. They tend to be smiling, flashlit, and unambiguous. A seasonal border encircles the image. Winogrand said about the family snapshot "When they're talking about snapshots they're talking about the family album picture, which is one of the most precisely made photographs. Everybody's fifteen feet away and smiling. The sun is over the viewer's shoulder. That's when the picture is taken, always. It's one of the most carefully made photographs that ever happened."

Here's a small handful of carefully made photographs we received recently: 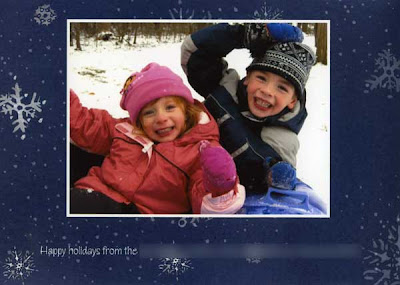 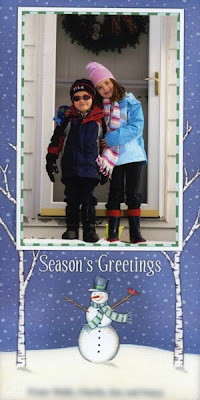 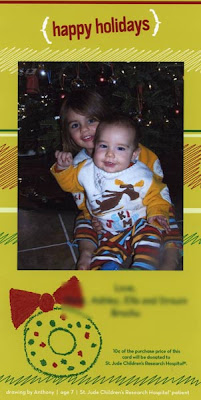 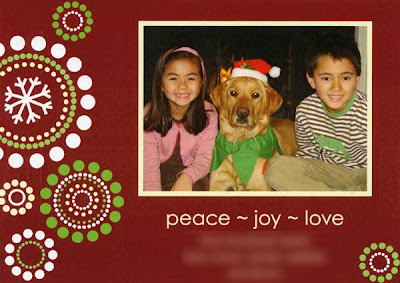 And here's the one we sent out: 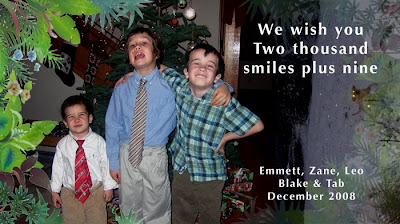 Since holiday cards are private correspondence, posting them without permission on a public blog is a bit of a taboo. I'm guessing that as you looked through them, you felt a shudder and thought, "You can't just put pictures of poor defenseless kids out there!" I think that sense of unmasked anonymity gives them some energy.

Yet look at them again. They're still just as anonymous. You have no idea who these people are, and that's really where their power lies. When I look at them I see one thing --pictures of dear friends and family-- yet to anyone else their meaning changes completely. The audience activates the photo.

This is the way most photographs operate but I don't think it's commonly acknowledged. The person who takes a photo almost always has a very different understanding of the image than anyone else. He/she was at the scene at the moment of exposure. All those memories and thoughts filter the photo's meaning. For anyone else it might as well be a stranger's Christmas card.
Posted by Blake Andrews at 2:15 PM