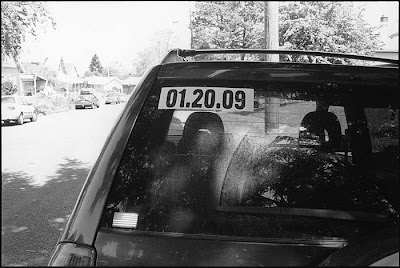 I took this photograph in North Portland in May, 2007. At that point Barack Obama was barely a blip on the radar and the idea that he might become president was unthinkable. This was the first time I'd ever seen this bumper sticker (I've since encountered it many times), and it instantly resonated with me. Its power was that it didn't refer to any person, just the date. The sticker didn't care who took over (although I'm glad it's Obama), only that on that date someone, anyone, would wake us from our national nightmare. At that point 1-20-09 seemed so far away it would never get here. I've been waiting for it like a kid counting down days to Christmas. Today eight years of tyrannical incompetence has finally been put behind us.
Posted by Blake Andrews at 9:52 AM

Yeah that is a great sticker, and the whole world is happy!!!
However, when is America going to realise it should be:
day before month before year! 20/01/09

I suppose it's the same reason we never adopted the metric system. America seems to revel in its idiosyncracies.

Greetings from ten years in the future! If you thought the GW Bush years were "tyrannical incompetence", I'm not sure you want to hear what's going down in 2019 . . .