Mike Peters: What Was He Thinking?

Mike Peters is the staff photographer at Montclair State University in Montclair, NJ. The images below are from his personal work making street photographs in and around NYC. More of his photos can be seen on his website. 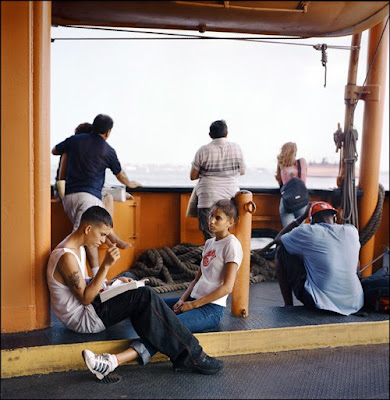 "A few months before this point I had just decided to start shooting on the street again. I used to wander my neighborhood with my 4x5 and photograph people, but it had become too cumbersome and I had become more interested in making spontaneous images. I had used square format professionally, and on a few personal projects, and decided that it would be the best compromise between 35 and 4x5, plus I loved the formality and uniformity of the frame so I picked up a Seagull TLR to see if it would work out. This was shot while riding the Staten Island Ferry on a family outing. I saw the interaction of the couple on the left and loved the gaze she was giving him and the position of their legs. They were what I was after and the others were like extras. As an extra added bonus, the way the structure of the ship added to the frame and the quality of the light were all working in my favor. In other words it was a total gut reaction. I saw, composed, and shot." 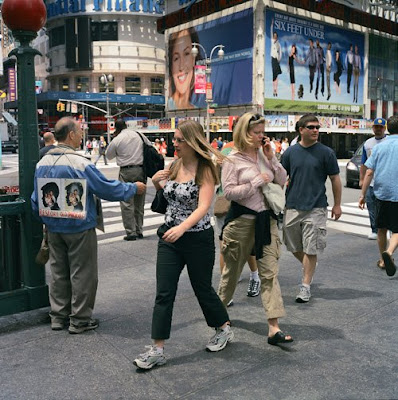 "Forty Second Street and Broadway is always a place where something is happening. I was walking west and noticed the man handing out fliers to passers by. He had a placard that read "Restore Old Photos" very crudely written below amazingly cheesy images. I decided to delay my trip for a few minutes and waited around while he attempted to hand out his allotment of fliers. I was struck by his invisibility to people as they rushed by him, and by the odd ways in which people seemed to be going in different directions all at once. I clicked off a few frames and went on my way, convinced that I was as invisible to people on the street as the man with the placard. Everyone seems to be in their own little world or cell phones, ipods, girl watching, whatever. And then there is my world, constrained by the four equal sides of the viewfinder." 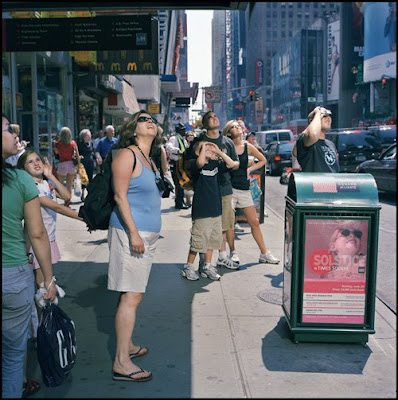 "I'm one of those geeky photographers that constantly checks his meter as I walk down the street. You would think that after 35 years of making photos that I would just know what the exposure is, but no, I am a slave to the meter on my wrist. I was walking down 7th Ave in the middle of Times Square, adjusting my exposure to match the reflection of the light coming off the building when I noticed everyone in front of me looking up. Pre-focused, all I did was raise the camera to my eye, compose and shoot, the trash can a mere element to the frame. When I lowered the camera, I noticed the image on the can and laughed. I have no idea what they were looking at." 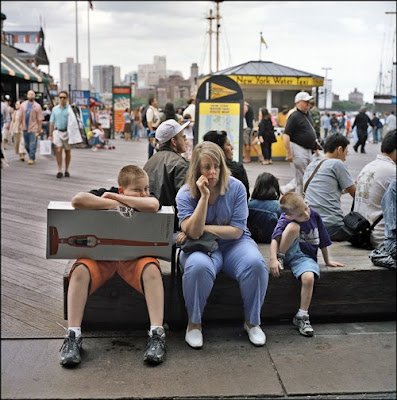 "The South Street Seaport in NYC is both a tourist trap and shopping mecca. It's one of those places that pisses me off. I don't get why people will come from the midwest to shop in the same store in NYC that they can find in their local mall, or why locals would deal with the dearth of parking. Nonetheless, it is a great place to find people indulging in the great American pastime without having to dodge mall security because I have a camera. It was hot, humid and they were exhausted and bored to death. The kid on the left seemed just thrilled to have a new vacuum cleaner while his mother was inconsolable from having to say no you can't have this and that to him and his little fidgety brother ten thousand times. I recognized and identified with everyone's expression and body language as I saw the scene unfold before me, from the point of view of the kids and the parent. Shopping is hard work. I noticed them as I wandered by and couldn't help but make a record of their misery." 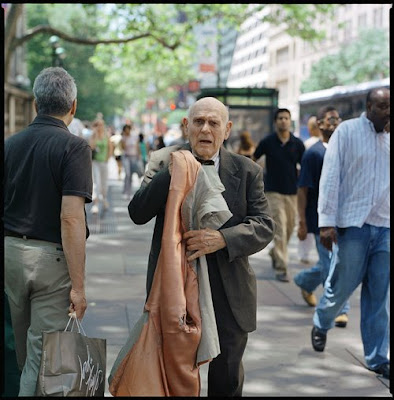 "This was my first foray out with a new camera, and I was sure I had made a mistake giving up my Rolleiflex TLR for a Hasselblad. You see, the lens I wanted with the Hassy was on the longish side of normal at 110 mm, like 55 mm on 35 format, and I was struggling. As I turned the corner of 42nd and 5th I immediately saw this man slowly walking towards me, it was a warm day and he had on a raincoat, his expression seemed to be somewhere between total exhaustion and sheer terror. I couldn't really make it out but I knew what he was feeling. I paused in the middle of the sidewalk just as he stopped to remove his coat. I lifted the camera to my eye, he caught the gaze of my lens, kerchunk went the mirror/shutter, and we both went on our way. After this, I was now sure I had not made a mistake as the longer lens seemed to be able to isolate people a bit more than the 80." 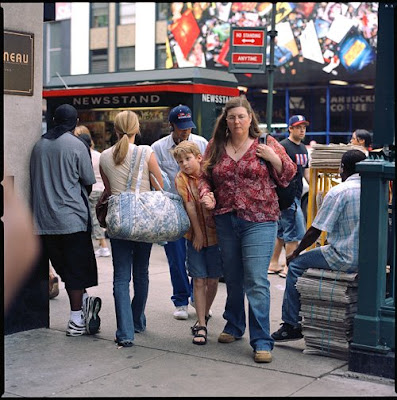 "Making sense of the chaos that unfolds on the streets of NYC can be difficult. There are times however when you come across a spot where you just know something will happen. Usually you are wrong but not always. I noticed this little slice of the corner of 34th Street and 7th Ave as a place that was a bottleneck for pedestrian traffic, the guys on either side making a bad situation worse by being in the way. It seemed ripe with possibility, so I stopped, pre-focused, composed and waited. Not having a motor wind meant that I get one shot at any given moment, so the voice of Homer Simpson saying "wait for it!" seeps into my head. I saw the woman with the big bag walk in front of me and I waited for her to pass by the man on the left while at the same time seeing the mother in the middle dragging her son along. I knew I had something, but it wasn't until I saw the contact sheet that I was sure." 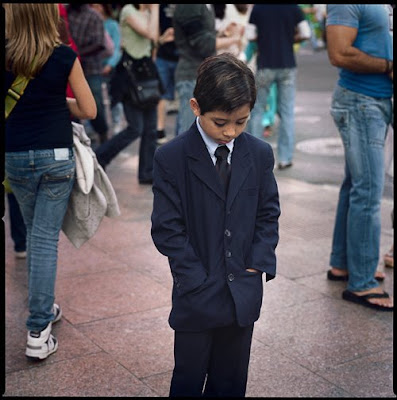 "34th Street and Broadway is one of those intersections where if you just happen to hang around long enough, things will happen. This well dressed little boy was thrust by a gaggle of female relatives into the middle of the sidewalk so they could take snapshot of him with Macy's in the background. They all cooed and giggled while they shot away. I noticed that he was pushing his hands deep into his pockets while lowering his head in what seemed like embarrassment at being the center of attention. The crowd of pedestrians cleared around him while I found focus and made the photo, the ladies laughed and the little boy was dragged along somewhere else with them." 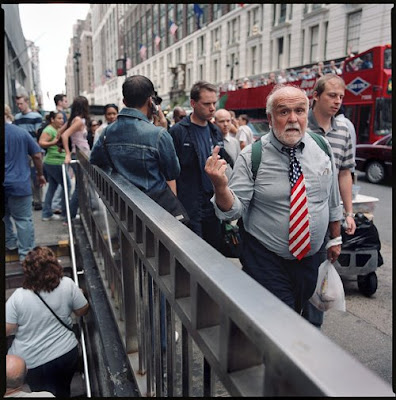 "About ten minutes after the shot of the little boy above, this shot was made in a way that was completely different. Whereas the little boy shot was completely in the moment, this one I waited for. I noticed the gangs of people emerging from the subway merging with the already crowded throngs on the sidewalk trying to avoid the man on the cell phone. I switched to a wide angle lens to make the diagonal of the railing into a strong element in the frame. Standing there with the camera to my eye, I thought it was interesting how people would look at the camera at they passed by, so I set focus at about 6 or 7 feet and waited for people to enter the zone. I noticed the man in the flag tie as he approached. As he passed cell phone man, he caught my lens and spontaneously flipped me the bird. Remarkably I managed to stay composed enough to press the shutter button despite being totally thrilled at what he had done. A big grin emerged on my face behind the camera, and as he passed he said "sorry" as if he had ruined the photo. No apologies necessary."
Posted by Blake Andrews at 8:30 AM

Great to see these and interesting to see the square format used so well.
Thanks Mike & Blake!

imagining the voice of homer simpson! i love that. maybe a post on the games photogs play with themselves to get the shots they want? i was thinking of the stranger devices that are more personal than timing, place, equipment, and instinct.

by the way, lovely stuff. it's nice to see complex street work in this format.

Mike, You use your Hassy as nimbly as most people use 35mm, and you make the most of that square format, which I find very challenging...Bravo!

Inspiring stories and great work. Thanks Mike and Blake.

It is wonderful to understand your frame of mind when you shot each picture, and boy, you must talk just like you think because everything I read was just like you! How fun and the photos are wonderful, as always!

During the 7 years i spent developing film for professional photographers, i have to say that your work was one of the very few that was very interesting and thoughtful. thank you.

Yeah, this stuff is good!