When I was a kid I spent a lot of my time exploring. I dug around behind buildings, carved forts in blackberry brambles, tromped through the woods. I spent time in the places that are usually only visited by kids or sometimes the homeless.

Yesterday I spent about half the day out shooting and it was just like being a kid again. I was with George in a hilly part of Portland that sprawls with lots of gravel roads and forest near the interstate. It's the forgotten armpit of the city, kept from development by the natural deafening roar of highway traffic, and with probably the highest concentration of strip clubs in the city. We walked here and there on sidewalks or trails, over fences, down ravines. The whole while we were out I kept thinking, this is just like being a kid. We're visiting places rarely traveled by anyone who doesn't live nearby or maybe the occasional photographer. The sense of exploration is a true creative engine.

Poking around behind some low-rent apartments I was approached by the manager. There'd been reports of people with cameras and what was my story? I launched into a detailed explanation of the Grid project, showed him the map, explained it was harmless. About two minutes into it I could tell he'd softened. He had no idea what my project was about but I realized that it didn't matter what I said. It was the tone, the authority. As long there was some objective reason for my presence and as long as I could explain it, it didn't matter what it was. I could say, "I've been sent by aliens to perform experiments on the dwellers here," and if it sounded like it had passed through the proper channels he would be ok with it. But if I'd said, "I'm exploring your area with fresh eyes like a kid," there might've been trouble.

The number of places one can photograph freely is diminishing. Most private places ban photography, period. Public spaces allow it but the act is viewed with suspicion. Within my lifetime I expect public photography in the U.S. to be severely restricted as it already is in the UK and France. It's ok. I'll continue to photograph in any space public or private in complete disregard for any law, and in fact I encourage everyone to ignore any restrictions on photography. Photograph bridges. Photograph kids. Photograph nuclear facilities. Photograph anything you're not supposed to. Photography is not a crime! 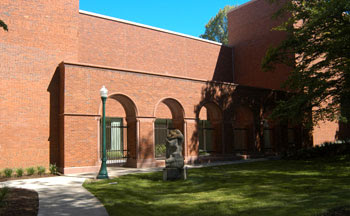 The Jordan Schnitzer Museum makes the right move
All of which serves as backdrop to my recent visit to the Jordan Schnitzer Museum on the U of O campus, where I received a pleasant surprise. Photography in the galleries used to be prohibited. Now the rules have changed and it is allowed anywhere in the museum except for a few specific artworks. This has to be one of the few instances in the country of an institution liberalizing their photography policy! Can anyone out there come up with another recent example?
Posted by Blake Andrews at 8:29 AM

I have been quietly enjoying your blog for a while now. That inevitable encounter with suspicion is an eternal recurrence of the loss of childhood innocence. It happened to me yesterday. And the day before.