Ready for the Whitney to call any day now... 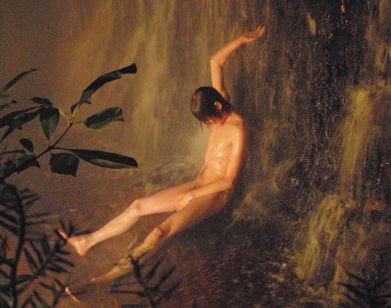 Ryan McGinley, 2008
While browsing this recent interview with William Eggleston (by Larry Clark collaborator Harmony Korine), on the same site I stumbled on Ryan McGinley's travel journal. Ah, to be young and successful...and if I could get a sponsor to supply a van of naked models and endless film on my cross country wanderings, that would be nice too (or would've been twenty years ago). Enough has been written about his photos so I won't go into that. I just wanted to say that McGinley's travelogue is surprisingly engaging. An excerpt:

June 13. Clayton, Ga. It's Friday the 13th. I've been out of contact with most everyone I'm friends with. It doesn't feel right to call people when you're on the road-it's nice just to get away from it all. We drove from Tennessee through Franklin, North Carolina, where almost exactly one year ago to the day my Volkswagen Eurovan died on the side of the highway. I thought I had died too and saw the light, but it was just the white powder from the airbag.

When I first read this I grew wistful for the long unplanned road trips of my younger years. But then I thought, wait a minute. I live in a house of young naked models! I drive them around in a van, and you're darn right its airbag contains white powder! I may not have an endless supply of film, but I sure act as if I do! In short, my life is every bit as exciting as McGinley's. Here's an excerpt from a few days ago:

December 4. Eugene, Or. I've been out of contact with most of my kidless friends for the past few years. I don't enjoy the phone. I'd rather email, although lately I haven't had time. Today Leo and Emmett were home from school. Leo didn't put on clothes until noon. Emmett wore his Stormtrooper outfit, then wanted to wear Spiderman, then wanted Stormtrooper again, then he crapped his diaper and some of it got on the legging so I just stripped him naked. Then we couldn't find any blank paper in the house so we wound up using the dog's face as a canvas. Good thing Annie's white. Leo wanted her to have mean eyebrows and Emmett wanted smiley, and it turned into a screaming match. Then Leo decided she needed a big gray "brain" on top. Annie took it all pretty well. Later Emmett found the prism I thought we'd lost and for the next hour acted as if he'd seen the light. 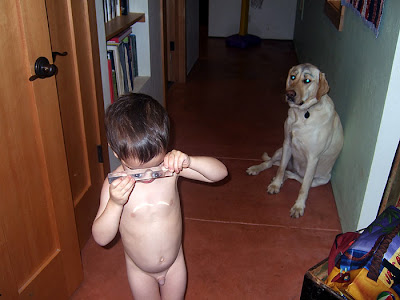 i love this post. very funny. and true! - plechl

hilarious! I enjoy your musings very much.