Folks in the Portland area have one more day to catch Christopher Rauschenberg's photographs in a group show at Marylhurst. The photos are from Rauschenberg's Rephotographing Atget series, for which he visited the site of specific Atget photos and rephotographed the scenes from the same modern vantage point. Last year the series was published in book form. In another series called Atget's Footsteps he seeks to emulate the mood of Atget's photos rather than specific sites. If you think Rauschenberg has a thing for Atget you're right. He's said many times he considers him the greatest photographer, period.

Last year Lens Culture's Jim Casper interviewed Rauschenberg about his Atget work. Although it's too long (14 minutes) to transcribe in its entirety the audio clip is well worth listening to. Rauschenberg has spent much of his life photographing, and when he's not photographing he's thinking about photography. His description of his process is wonderfully evocative. Below are a few chosen excerpts:

"I was using 35 millimeter and I used a perspective correcting lens, a 28 mm lens which is a little less wide than what Atget had, not that I know what Atget had from history books but I know from putting my picture next to his picture that in order to get the same coverage I was a step further away. If the edges of the frame were in the same spots I was a step further back. 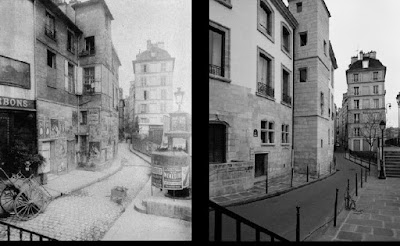 "While for some people working with a view camera and working really slowly and making one picture in the amount of time and the amount of just general quantity that someone else would shoot one roll of film, that's better for them. They get a better picture if they just work on that one picture that whole time. But for me that's not how my learning style is. That's not how my brain is. I need to be not on a tripod generally and I need to be shooting 35 mm.

"I always feel like if I shot 10% fewer pictures I would loose half of my best pictures. Because at least half of my best pictures are ones where like I don't think there's even a picture there. But I'll shoot it anyway because it's 35 mm what the hell? And sure enough there was a picture there. And photography and any kind of art has to do with discovery. It's not illustration. It's research and development. And so for me that's really important. 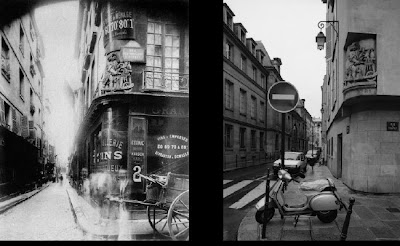 "In 9 weeks I went to 500 sites. There's a breadth that's available in 35 mm, shooting as a fruitfly that makes generations in 10 minutes rather than an elephant that makes a generation every 7 years. I was able to go to 500 places. Some of them I went back to over and over again. I didn't wait for the right time of light. I said I'm not going to stand in this place all day and wait until the light is perfect. I'm going to go now. I'll take the pictures. I'll come back. I'll see if the light's better another time. I'm gonna keep moving.

"To me there's a tremendous amount I'm giving up in terms of this could be sharper, the tones could be richer, but it's that same thing. I'd be working slower. I'd be missing a lot of the good ones. And I'd be giving up a lot of depth of field unless I was prepared to make a really long exposure. When I was a fairly young photographer I did a whole series of pictures photographing at night and I just couldn't think that slowly. I'd say now I'm going to make a ten minute exposure and I would just...I couldn't stay in a groove. Once I pushed the shutter I could stand there for 10 minutes but then what am I photographing next? 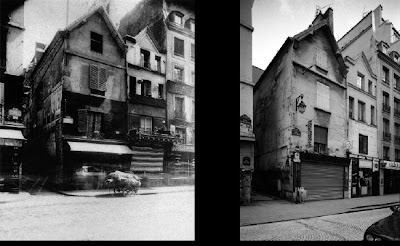 "When I look at my contact sheets it's like OK I went out and took 100 pictures today. Here's a whole bunch of boring ones, boring ones, boring ones, and here's a little stretch where in 8 exposures I got 5 great pictures, the 5 best pictures of all day. And then they get all boring again. So that's the groove I can't get into if I work that slowly. That's not the case for other people. Other people, they don't get in a groove, they dig a hole. They dig themselves a groove by working slowly and methodically. But that's not me. That's not how I do it. I make the groove like they do in the Roadrunner cartoons where your legs are spinning around like a pinwheel and the dirt is flying out behind you. That's my digging style. 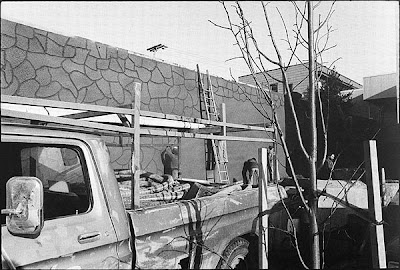 "...The most profound thing that I found out about Atget is that I absolutely underestimated how straightforward he is. One of the early ways that I always would describe myself when people say what kind of work do you do and I didn't have anything to show them and I was talking to a photography person, I'd say well I sort of position myself at the corner of Friedlander and Atget. It's a wonderful description but at the end of this project I realized there is no corner of Friedlander and Atget. Friedlander is the most tricky photographer and the most visually complicated and playful photographer, and Atget is the most straightforward. One of the early pictures that I took in the faux-Atget category was in The Pantheon which used to be a big cathedral and now it's where the heroes of the French Republic are buried, and so there's this biplane suspended from the ceiling below this cathedral and it's like this great crazy image. But the way I photographed it there's a heel of a statue of someone who's like walking, just the heel sticking in the corner of the picture. 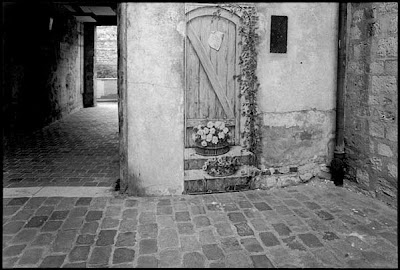 And it's like at the beginning of the project I just went oh yeah, you know, that's fine. And...not much later I realized, yeah that's fine in the sense of that's a fine picture, but that's not an Atget picture. He would never have a heel sticking into the picture. That's Archie Shepp, that's not Bach."