Steve Rockoff: What Was He Thinking?

Steve Rockoff is a photographer based in Vancouver, WA. He shoots primarily 35 mm b/w film using a Contax rangefinder. A small selection of other images can be seen here. 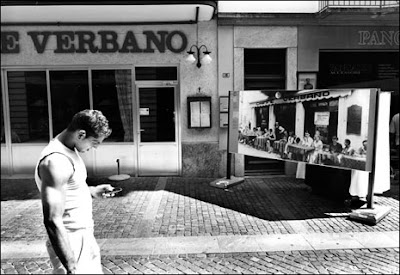 Ascona, Switzerland
"Before college tuitions, travel was a passion. On a late afternoon returning to my bus stop from the bay, I spotted a very athletic man aglow in white. He was walking towards me so I thought ‘background’. The town was having a tourist street exposition of older photo posters so I stepped into a doorway, composed the background , and waited for him to enter the viewfinder. Not exactly sure where he would be or who might enter as well; there was one shutter click and a fair amount of luck in creating the image." 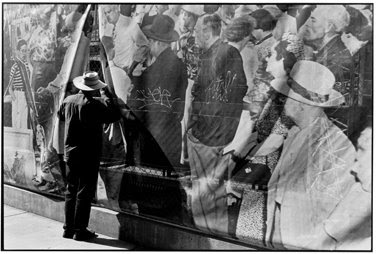 "With less travel in recent years I am drawn to nearby downtown with camera in hand, sometimes long walks just looking if weather allows, and sometimes just waiting for family to reunite. The light was at a nice angle later in the day. I was waiting outside a movie house when a man in a hat stepped up to look at a city-wide block excavation surrounded by fences on which cloth murals were suspended. I liked the shared sense of looking together and the balance of mural and real men with hats. I recall vividly my excitement of the composition creating itself. I don’t remember what movie we saw." 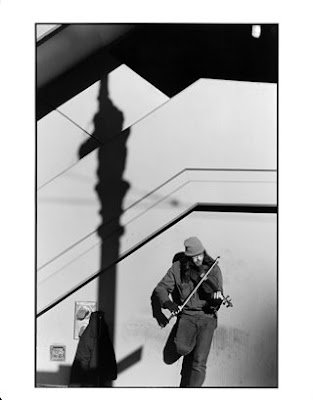 Portland , Oregon
"Portland is alive with some very talented, and some pretty quirky and not-so-talented, street performers whose dedication to art is sometimes very evident by their braving the crummy fall and winter weather. Across from Finnegan’s and Art Media, by the parking structure, one will often find Tim with his fiddle, practicing, performing, and most certainly entertaining all within range. He is very good. Since taking this shot I have often stopped to just listen and donate a buck to help him continue. He also teaches and plays in band gigs when he can. Catch his music and donate some cash if you happen to cross paths. Better yet buy a CD. It has this image on it." 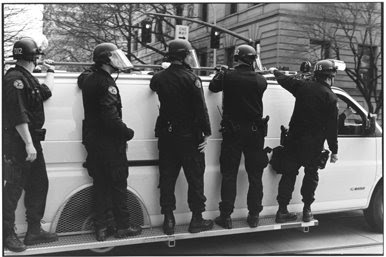 Portland, Oregon
"I was on a walk in town with my camera when a growing police presence and blocked street became evident. About 75 young protesters were demonstrating against bank support of the Iraq war. The police had confined them to the sidewalk, not allowing any entry to bank steps or street. When one protester got a little angry the SWAT team arrived. Ten rather ominous officers on running boards of a white unmarked van with a few more inside pulled up in front of my vantage point with other observers across the street, and piled out to reinforce the police line. All soon calmed down and the protesters dispersed. The underexposed negative seems to darken their human presence and maybe capture my feeling of the event." 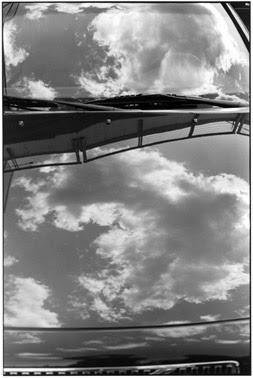 Portland, Oregon
"When my car odometer stopped at 214K I thought it might be a good idea to check out the used car market. Waiting for a test drive I noticed a typical northwest sky reflected in the curved windshield and grabbed an image. Usually a good idea to look up, down, and behind, as well as where you’re going, when hunting for images." 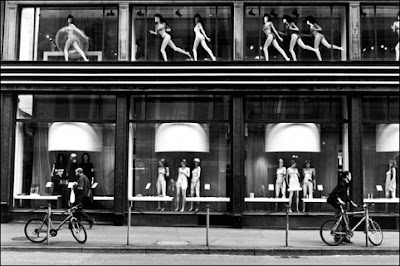 Zurich, Switzerland
"Another Swiss view. Family in the department store while I was on the street with camera. The window display was rather sexist with none of the pedestrians taking notice. I thought the 2 bicycles balanced the foreground and was waiting for an interesting single or group of pedestrians to pass when a man came to claim the right bike. Luckily another male and no others entered before the scene dissolved. I think the image lends itself to a fair amount of social interpretation."
Posted by Blake Andrews at 10:47 AM