One of the truisms of photography is that photographs seem to get more interesting as they age. Even the most boring photos made today will probably be interesting to future viewers because they give a window into our world. At the current rate of societal change the world will look quite different in 20 or 50 years, and photographs will serve as a visual reference to the past.

This past weekend I climbed Oregon's Mt. Jefferson with some friends and was reminded of how quickly the past recedes. Twelve years ago I'd climbed the same route but it had looked completely different. Back then the routefinding had been straightforward and direct, right up the center of the glacier. Now twelve years later the crevasses are larger and the route zigzags around them. Most impressively, the upper bergschrund where Jefferson Park Glacier attaches to the mountain has tripled in size. The route used to depend on snow ramps and bridges to get across it. Now the glacier has shriveled like pruned skin and no snow bridge could surmount it. The route goes far right, and up a small headwall into the glacial moat above the schrund. At the current rate of melt, I expect this headwall will be gone within 10 years. After that, who knows if the route will exist?

I expect that within 50 years, there will be very few glaciers in Oregon and photographs like the ones below will seem like something out of a fairy tale. I think that if I live that long and look back on these photos, part of me will feel as if it has melted. 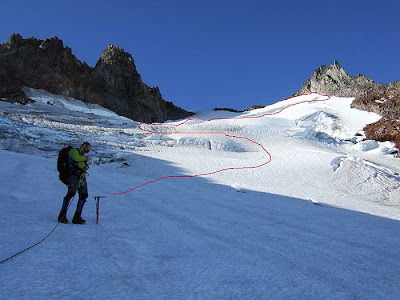 Here's Tom at the base of the Jefferson Park Glacier. The red line shows the route through crevasses above. 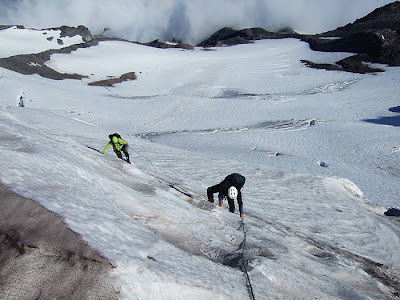 Geoff and Tom ascending the mid-section of the glacier. 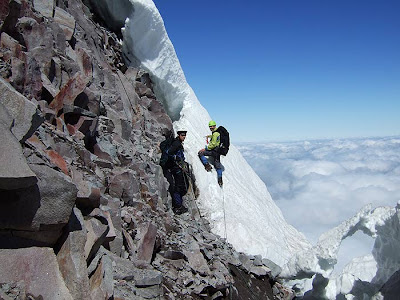 Tom leads the headwall on the far right side of the bergschrund. Within 10 years, this photo op will be history. 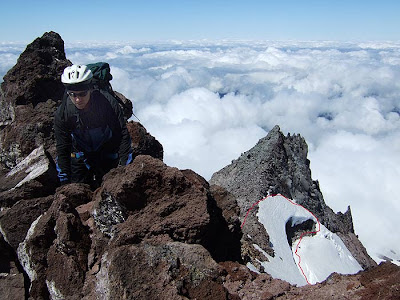 Geoff on the ridge above the glacier. The red line below shows the route up the headwall and into the moat. 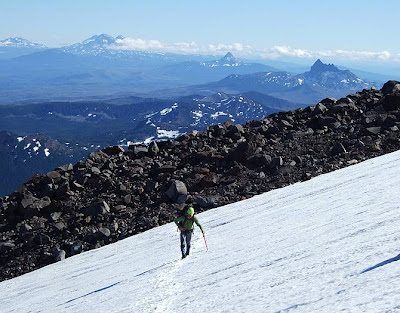 Tom descending Whitewater Glacier on the opposite side of the mountain. Behind him, in order, are Three Fingered Jack, Mt. Washington, Three Sisters, and Broken Top, each mountain surrounded by glaciers that will vanish within 50 years.

If this blog is still around in 2058, check back in and see how the photos look from a future perspective. Upon doing so, feel free to let your heart melt...
Posted by Blake Andrews at 12:20 PM