A lot of Jackass isn't that funny. There's only so much one can take of people flipping golf carts or punching each other in the scrotum. It's amusing but not deep. The Jackass scenes that I do find funny are the ones which mentally tweak bystanders. For example, in one scene they call a cab for the airport. As the cabbie is lifting luggage from the curb, one of the duffels unzips and a dwarf emerges naked and bound in ducktape who begins running away shouting for help. WHAT IN THE...?!? This scene is repeated a few times with fresh cabbies and each time the cabbie jumps about a foot in the air.

What makes this funny-slash-absurd is that an incongruity is being forced on someone who doesn't expect it. You're shoving something mysterious in someone's face and the question becomes, "How is your worldview going to encompass this?" At that precise moment of shock is an "Aha!" moment, a zen-master's slap with a slick, the type of awakening a good street shot can create.

I have a few ideas for Jackass scenes. I'd like to do one in which a person emerges soaking wet from the restroom of a crowded airport, perhaps O'Hare or Hartsfield-Jackson. Another idea is to visit the scene of a long line, perhaps at a concert or sold-out sporting event, or maybe just at a supermarket around 5 pm. I'd like to walk in front of the line and cut in with no explanation, just to see how folks react. I believe worldviews would get pissed. 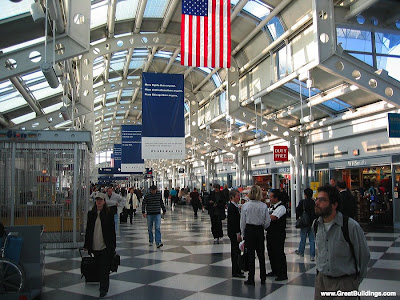 O'Hare's United Terminal designed by Helmut Jahn
Last weekend at the NW Reviews I came up with another. At the end of the weekend there was a big rooftop soirée on top of the Blue Sky building. All the participants and reviewers were there along with assorted Portland photographic glitterati. Movers and shakers were moving and shaking. I thought it would be a great environment for a telephoto lens. I'm talking about the huge lenses you see at pro sporting events, the ones which are so big and bulky that the camera body hangs off one end like a little speck. The rooftop soirée was the ideal environment to hang one of those around your neck. Like, here I am! I'm a BSD, and my lens is longer than yours! Perhaps a loud Hawaiian shirt would complement the effect. I wouldn't use the lens, it would just hang limply. Maybe I could swing it around to knock over a drink. I don't know. I just think it would be funny to see how fine art photographers reacted to such a spectacle. 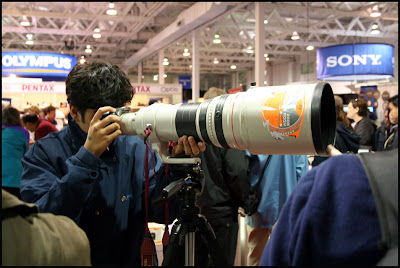 I'm guessing the lens would not look to them like a zen master's stick.

Sigh,...I think I've been living alone for too long. Tab and the kids return Monday from Maine.
Posted by Blake Andrews at 8:55 AM

yes blake it certainly sounds like you've had way too much time alone! I do hope you stick with still photography!!