When I printed at U-Develop in the 1990s, a man whose name escapes me used the darkroom sometimes. For one of his projects he limited himself to one exposure per day. At the end of each year he would line the U-Develop stairwell with a grid of all 365 images, some of which were quite strong. This was back in the days of film, and each of these photos was processed and printed by hand. It was quite a project.

In the digital age, the one-photo-per-day idea seems to have caught on like wildfire. There are a huge number of such projects out there, ranging from the personal work of Doug Plummer or Joseph O. Holmes to composite filters such as Flak Photo, to the sublime weirdness of Noah Kalina's self portraits, just to name a handful. 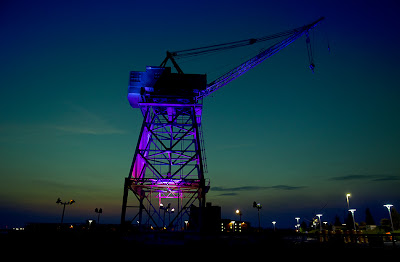 July 31st, 2008 by Joseph O. Holmes
Generally I approach these projects with a leery eye. The constraint of finding one photo per day seems a bit artificial. Some days you might take five great shots and it could be another week before another good one turns up. That is the rhythm of photography. To package this rhythm into a one-a-day box seems a bit forced. Also, there's a certain motivational factor lurking in the background --"I'm going to kickstart my photography by forcing myself to keep my camera handy and find a photo today!" -- that I find bothersome. To me, the urge to take photographs should be so strong that no project should be necessary. I mean, it goes without saying that a photographer is naked without a camera. 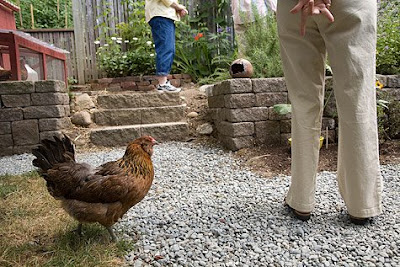 August 3, 2008 by Doug Plummer
All of which is prelude to my discovery of Byron Wolfe's (no relation) book Everyday. When I first came across the title at the U of O library my inititial instinct was to pass, based on all my prejudices outlined above. But the name Byron Wolfe rang a bell. He'd been involved with Mark Klett's Third View series shown at last year's Blue Sky grand opening, and some of the more intriguing photos in that show had actually been taken by him. I started thumbing through the book and I liked what I saw. It went into the takehome pile, and later that evening I had a chance to study it in increments while waiting for negs to scan. 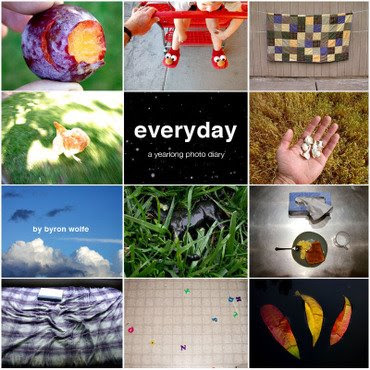 What emerges from the book is an intimate portrait of the everyday life of Byron Wolfe. After looking through it I feel as if I've read a year's worth of his diary. I know his kids, his yard, his work environment, his garden, his chickens, the inside of his car, the repeating syndrome of spills near his kitchen table, all of the small things that make up an everyday (there's that word again) existence. The current that holds everything together is the seasonal cycle. The project begins shortly after Summer Solstice, on Wolfe's birthday, and ends one year later. Many of the images focus on vegetation and weather events, and as the year progresses we see the seasons in the background. We see his young kids age, and by the end of the book we know Wolfe's a year older, and the whole experience made me think for a while about the aging process, about life's cycle, about time torrenting along like a river in flood.

The book is helped along by Wolfe's light touch. These are not crystalline f/64 shots from a tripod. They are not the broad cinematic vistas of Third View. They are snapshots, spontaneously exploring all visual aspects of Wolfe's life. Most of the photos are captioned in a natural, offbeat manner that offers alternative perspective. They celebrate the normal, the vernacular, the nonspecial, and in so doing Wolfe has actually created something special.
Posted by Blake Andrews at 9:01 AM

Sounds like Everyday is more about the whole year than about each day--maybe that's why it holds your interest more than other one-a-day projects. A year's worth of snippets (presented and captured in that context) paints quite a portrait of a life.

The guy you mentioned at Udevelop was Vince Radostitz (the project was since 2000 though), and while it was a daily diary of his kids' growth and a record of family life, the truth was that he had other cameras for the times he wanted to shoot more than one shot. He just shot one-a-day on his rollei, and if he was out of town for his job he shot a wallet photo of them that he carried along! I think his presentation both times at UD, with a year or two of contact sheets in order, was more interesting than the individual images, in the end at least.

check out https://pad.alkos.info/ - photo a day from a polish photographer living in ireland

Vince Radostitz here.... i stumbled upon your blog when i googled myself. Best be careful with that.

I think the comments on my project were spot on. The narrative nature of a photo-a-day project adds something that overcomes the weaker images. It takes an especially strong image to bear the scrutiny that we give it when it stands alone, taken out of it's context. It's like writing, in that sense. One word can make a big difference, but the collection of words is also a measure of the story. And, ultimately, the idea expressed is more important than the words, individually, or collectively.

I'm still not sure I knew what I was trying say with those photos (over 2000 images over six years) but I know it was something more than, "look at me, I'm sufficiently compulsive to take a photo every day."

I still enjoy the photos and memories of the project, and my kids will someday too.

Thanks for noticing, and I hope this finds you well...