Elephant in the room

My friend Bruce has this photo in his study: 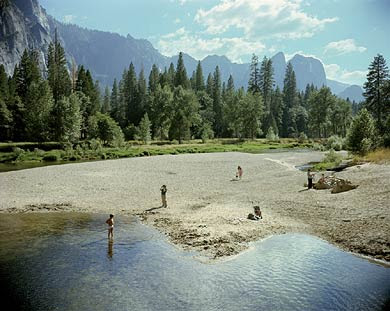 The print is roughly 10 x 12, matted and framed out to something like 16 x 20. It's a vintage C-print, presumably by Shore himself. Aside from the fact that it's a wonderful image, what interests me most about this photo is how it presents itself: intimate and formal.

If Shore were printing this photo for a gallery today, my guess is that it would be printed large. The 8 x 10 negative would give plenty of leeway to enlarge as expansively as desired. Maybe 30 x 40, 50 x 65, larger? The only size limit nowadays seems to be available wallspace, and given that many galleries find themselves in renovated warehouses or industrial spaces, the tendency is to Go Big! Fill that space!

Not only would the print be large but it would probably be displayed unmatted. Over the past several years, I've witnessed a seachange in gallery display. From the early 20th century until fairly recently, the standard was a dry-mounted image overlaid with white matting. This style was a bit Victorian —the equivalent of putting on top-hat and overcoat before venturing out in public— but nevertheless it had tremendous staying power, remaining as the standard until late in the past millennium. Initially the matted prints were all framed the same, in dark wood or metal. Gradually this gave way to matted prints displayed on their own behind glass, no frame.

Now the matte itself seems to be following the frame into history, or being replaced by it. Many shows I've seen recently are of prints in unmatted frames. The prints are either hung by the corners or from behind to allow a gap between photo and frame. Another trend is it dispense with the frame entirely and mount the photo to a stiff backing like wood or sintra, with no glass to help with self reflection. Then again, why use any mounting at all? More and more I see photos hung as is, with no support whatsoever. 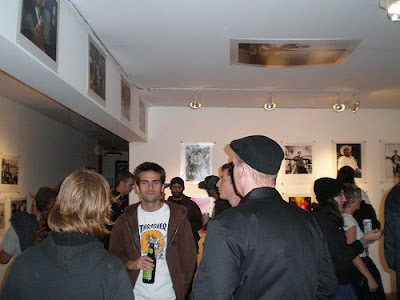 Although there is a certain direct honesty in this style which I find appealing, I can't help feel that photography is still looking over its shoulder at Painting-capital-P, which has been frameless for decades, not to mention big and colorful.

Back to Bruce's photo. To really see the thing I was forced to stand close and look close, and the matting funneled my vision to the proper spot. There was no mistaking that photograph for any other art form.

I don't mean to complain or say things were better the old way. I actually think recent framing changes have been for the better. I just want to point out that they are happening. For whatever reason, I haven't seen much commentary on a change which seems widespread and symptomatic of deeper trends.
Posted by Blake Andrews at 9:39 AM

I swap one of my flatmates with hot chick posters for one of your mates with Shore prints.

On displaying, I have large prints that have been mounted on thin cardboard. But my favourite is just a bunch of 5x7'' prints and a lot of blue tack! Anywhere, anytime!

I know not relavent to your post, but interesting -- many of Shore's prints at ICP retrospective last year were large, but not huge, and the large prints were conventionally matted. I also have his one-picture book, Merced River and that image (same as your post) is actually quite beautiful at 2.5 x 3.