Last spring I posted thoughts by Colin Wood, the subject of Diane Arbus' famous Grenade Boy photo. Following up on that, I've just discovered a Washington Post article (courtesy of The Year in Pictures) in which David Segal interviews Wood along with several other Arbus subjects, including the twins on her monograph cover. Great reading! 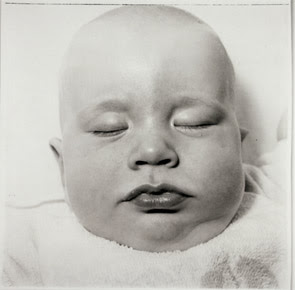 Anderson Cooper photographed as an infant by Diane Arbus
In other news, Chas Bowie has finally grabbed the reigns and performed a service that was long overdue: A regularly updated monthly critique of Portland photo shows. Thanks Chas! It's amazing that with all the photographic activity in the city Bowie is the first to tackle this. (I ran a top 60 photo shows list when I lived in Portland but it was less of a critique than compilation of personal preferences). Bowie is a smart critic and terse writer, and hopefully he can offer insight and guidance into what has become an exciting scene. His August review seemed to hit the nail on the head for each show.

Closer to home, two Eugene shows last month perfectly summed up the city's somewhat schizophrenic nature. Photozone had its annual group show at Emerald Art Center. I will probably ruffle some feathers when I say the show was generally amateur and cliche-ridden. Oceanscapes, waterfalls, hyper-saturated digital creations, you get the idea. Did I mention weathered barns? I guess I knew what to expect going in but still couldn't help feeling disappointed. After all, Photozone is supposedly the area's premier photography club. Oh well. Images from that show were quickly supplanted as I stopped on the ride home to catch Edward Burtynsky's photographs of China, for which the Jordan Schnitzer has wisely dedicated the entire main hall upstairs. The Burtynsky stuff was big and powerful in every way, from the size of the prints to the scale of the industrial scenes depicted to the general scope of modernization sweeping through China. If you have a hard to getting your head around the maelstrom of change that is contemporary China, this show is the pinprick that will explode your mental bubble. I couldn't help come away from the show with my nagging sense further affirmed that we as a planet are all fucked. Maybe a nice happy waterfall photo would cheer me up? 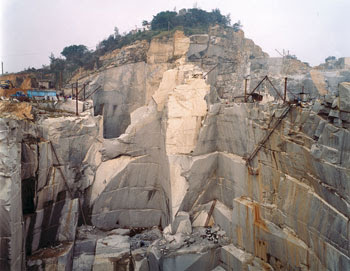 From Edward Burtynsky's China series
I know it's not fair to compare Photozone to Burtynsky. I just thought the fact that both shows sat side by side for a month really crystallized the nature of the arts scene here. On the one hand, Eugene embodies more intellect, expression and culture than should be expected of a city its size. On the other hand, it is basically a provincial outpost struggling to find identity in the post-timber age.

Lastly, in June I posted a note about the remaindering of Jeff Mermelstein's No Title Here. Looking through the latest Daedulus Books catalog, it seems the cover price of that book has been slashed even further, this time to $7.98. That's right, for about the price of two rolls of film you can buy one of the best photo books out there. If you are at all interested in street photography, you should own this book. No excuses.
Posted by Blake Andrews at 2:08 PM

thanks for the tip on the book!