One of my Tumblrs had an unexpected spike this week. Normally the photos on Instax Gratification will collect just a handful of notes. Ten would be considered a lot. But on Monday the photo below by Lisa Gidley went on a sudden note terror, collecting likes and reblogs in clumps. It's now up to 134 and counting.

It was pretty easy to trace what had happened. On Monday Mark Peter Drolet had reblogged the photo. I have no idea how many followers his Tumblr has but I know it's a lot. Mark is like a viral spotlight. Anything that winds up on MPDrolet is immediately seen by hundreds of people and will begin collecting notes as a matter of course. And that's a service which Mark is providing for free.

For me this experience brought home the viral power of Tumblr, which works not so much as a standard viewing platform --à la Flickr-- but more as a huge leveraging service.

I think it is this aspect which separates it from the previous paradigm when it comes to image reproductions. In the old world --way, way back, say 5 years ago-- copying jpgs was viewed as outright theft, and photographers discouraged it. But with Tumblr, you want your images to be copied. Reproduction equals distribution, and distribution can lead to good things. It's a complete sea change within just a few years.

Unfortunately much of the photography world still hasn't caught on. Mark recently received a note from Getty requesting that he remove certain photos from his Tumblr stream because their reproduction was unauthorized. Getty owns copyright and they asked nicely, and so Mark complied with their request. But to me it seems Getty is wasting a huge opportunity. Why not get those photos out there? Why keep them hidden? It's like a record company producing an album and then refusing to allow its songs on the radio. How is anyone going to discover that music? 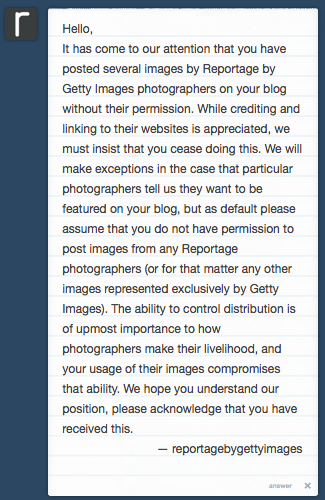 I see where Getty is coming from. They view photographs as intellectual property. It's just that their perspective is through an old fashioned lens. To them a photo is like a bicycle leaning against a porch or a Rolex in a safe. It's ripe for theft. If you consider a jpg in the same way, you might go to great lengths to protect it. You might ruin it with a watermark, thus ensuring that it'll never be stolen --or even looked at. Or you might lock it away and ask others not to copy it. Until quite recently that's how I too viewed photographs.

Maybe in the old world a photo operated like that. Nice prints exist in limited quantities, and each edition has a specific monetary value. Photo books still operate that way today, and thrive in that environment.

But I'm not sure a web jpg works the same way. A jpg is just the digital expression of a visual idea. It has no value. You can't sell it. You can't convert it into a nice print. Maybe you can't even steal it, since if you "steal" a jpg from a website, it doesn't remove the photo. Probably the closest you can come to theft is to copy a jpg, remove its identity, and represent it as your own. This abhorrent behavior may occur sometimes but I think it's rare in the Tumblr world. The much larger problem is unattributed reproductions, which is less an issue of theft than inattention.

"Photographers ultimately need to make money by selling their images," explains Getty. "Often, we or the photographer are trying to limit exposure so that certain images can be sold exclusively." This reasoning would've made perfect sense 20 years ago. It's the logical basis for imposing limited editions somewhat unnaturally on the photo world. But does it make sense online? It's difficult to understand how reposting to Tumblr imposes a financial burden. I think in most cases it fosters the opposite effect.

I'm not calling for outright civil disobedience. If Getty or a photographer asks you not to repost their images for any reason, I think it's their right and the request should be honored. But I think the logic behind that request becomes more strained by the day. For most photographers I think it works against their best interests. If we're going to spend so much energy making images, why not use every tool at our disposal to distribute and make them visible? Right now the main tool is Tumblr. Make a note of it.

Posted by Blake Andrews at 3:24 PM

Scurvy. Orange you glad you don't have it? said...

Wow that Lisa Gidley image deserves the attention. I think I need to dust off my Instax 210 this weekend. Excellent article as usual Mr Andrews.

The odd line in the Getty email is this one - "we or the photographer are trying to limit exposure so that certain images can be sold exclusively." If that was their intention, the image would have never been on the internet in jpeg format in the first place. I doubt Mr. Drolet hacked into their secret image server and took it from there.

Mr. Drolet's blog, at first glance, seems to be an endless stream of randomly selected images. But in terms of the copyright discussion, his putting one image next to another creates an unwritten commentary. One photo has woman's hair that matches a shirt in the next photo. A landscape from China blends into Montana. But Getty has a Tumblr blog, so obviously they understand this medium.

Meanwhile, have another Tumblr! http://theworstthingsforsale.com/

Recording...
Text acquired...
Saving to database...
Checking for validity of MICROCORD statement...
Does not compute. Cannot divide by zero. Statement error:Syntax error
/Shutting down in 10 seconds/

I actually don't see much different between Getty's case and Einzig's. Getty may be corporate drones but I don't think that fact negates their ownership status. It bears more on them being so slow to react to shifting circumstances.