My review of the new Paul Strand monograph The Garden At Orgeval was posted on Photo-Eye yesterday. I used some fancy words and tried to sound authoritative, so if you go for that sort of thing I think you'll find the review interesting. But if you're like me and value confusion, absurdity, and the accidentally poetic, you may like the following translation better. As with my previous review of Retinal Shift, I've sent my review around the world via Google Translate, this time English > Esperanto > Hebrew > Tamil > English. An article in the soul slow your vehicle and speed bump the smell of roses feel like the spring is just the corner allows. 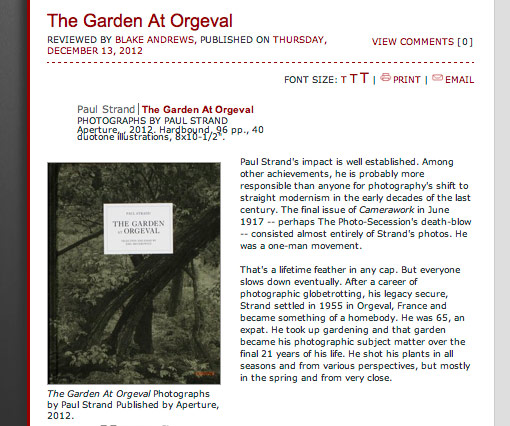 Paul Strand effect is well established. Among other achievements in the early decades of the last century, the change probably directly responsible for modern than any other film. Perhaps deathblow Photo - retirement - June 1917 The latest issue of camerawork photos Strand has almost completely. He was a man movement.

These pens are each cap. But at the end of a brake. Photo after a globetrotting career, his legacy secure, Strand Orgeval, France, was established in 1955, and became a kind of a homebody. He, Expat 65 is. In the last 21 years of his life he was in the garden and the garden became the subject of his photograph. He plants his shot all ages and different perspectives, but especially in the spring, and very soon.


"Page a picture, photo title, without tricks. That the design did not match the images. There is nothing virtual about them. Of visual perception, however, they do not show in the near genius or a simple irony. Only a clear view of branches and leaves. If something garbled about them, that they will be clean to dirty."

Garden for the first time in book form in the short Orgeval collect images. Simply and without images will be garbled. Page a picture, photo title, without tricks. That the design did not match the images. There is nothing virtual about them. Of visual perception, however, they do not show in the near genius or a simple irony. Only a clear view of branches and leaves. If something garbled about them, that they will be clean to dirty.

At first glance, this book may seem like a relic. In fact, Orgeval surfing on the set of a system like that in a bit. It's 1974, and we moved slowly through the roots and snails are looking to stand in court. Cindy Sherman has not happened. The New Topographics. Black and white is still the dominant aesthetic, and shot by a camera. Images, colors, and images are not in control of the entire canon. And in the world of photography, and more remote, usually according to a conservative print design and content. Gene Orgeval feel at home here.

I printed a photo of the flowers now and 2012, the time, the style and type of imagination. Of course, the other side of the coin, a book, one at a time right now is that the individual can not stand. Perhaps more importantly, be able to prove that the film moves currents. Reminder: It's not always like that.

Joel Meyerowitz Orgeval the introduction of these changes and proposed a unique trends. All photographic work is known as the Strand Meyerowitz, but do not really appreciate. Until recently he was also a deep understanding. Leaves Why do some shooting on the side? Now in his sleep at 70, he knew he would eventually. A new test that it works Strand Strand Orgeval is no coincidence that this happened when the adult Meyerowitz. Meyerowitz link to reconsider his earlier ago, and readers can assess their aesthetic choices about how to vary. We choose the time and, in addition to our opinion, this is not about social change is not such a big step. Strand modern approach a film before his retirement, as can be dry, but they are perhaps the inevitable rebirth, such as toy cameras, high process, and Instagram recently identified by popularity.


"The bile, the body is due to defects. Bodies and subjects them to close. But age is an aesthetic preferences change, efficiency and satisfaction are updated daily cumulative internalized."

It's not always like that. Trends come and go, it certainly reflects the fiber itself. Outside the immediate vicinity of the world-wide attention to the camera is a popular method. In later life, Joseph Sudek, André Kertész, or Ruth Orkin, shooting out all that is in their area. Or Robert Frank or Larry Towell and domestic scenes photos after the hearing. The bile, the body is due to defects. Bodies and subjects them to close. But age is an aesthetic preferences change, efficiency and satisfaction are updated daily cumulative internalized.

"Unlimited is a master of the world," Strand is mentioned in the book. "He was a few feet away, or at the residence. Always on his doorstep, can be found everywhere." Orgeval gene, the record can show readers
Posted by Blake Andrews at 8:40 AM

Article excellent this one mad cow disease has advantages.