Here are results of the Photobook Tournament's second round (upsets in italics):

Many tight contests and upsets galore. As in every round I was sad to see some personal favorites lose. Evidence? East 100th St.? Both out. Oh well, that's part of the fun. I think Brandt's English at Home could be this season's Cindarella. Who knew it would prove so strong? Can it top Atget? Will Moriyama be the book that says Bye Bye to The Americans? Is this The Decisive Moment when someone finally topples Cartier-Bresson? Who knows. Here's the way the tournament shapes up as of this morning: 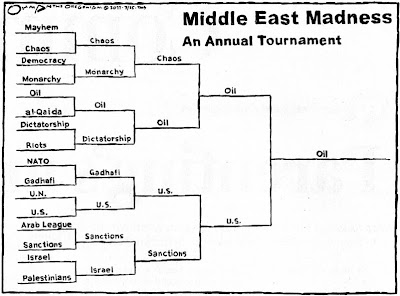 Jack Ohman for The Oregonian, 3/27/11
Oh wait a minute, wrong tournament. Sorry. I meant to post this one:

Third round voting continues in the right sidebar from now until 4/5 at midnight Pacific.

As for the main March Madness, my bracket has long since busted. Which is fine because now I can cheer freely for the underdogs. Pulling for VCU, but with a sinking feeling that Calipari might finally be holding scissors next Monday.
Posted by Blake Andrews at 8:13 AM

That Weston has gotten this far is farily unbelievable. His aesthetic seems so out of favor. Winning over Baltz is just looney. Gladly he's about to meet his end with the Eggleston match-up.

I'm pulling for Moriyama will make it to the final four, but there are probably too many Robert Frank zombies out there to make that a reality.

Atget's success is probably explains Weston's to some extent. I'd have thought the Bechers would make it farther and then for Man Ray to get knocked out? Where have all the avant garde voters gone?!

Sad to see Sultan knocked out, but I guess a book called "Carnival Strippers" is going to be hard to beat on some level.

Fun stuff, thanks for putting this together!

I haven't actually seen a copy of Weston's Fifty Photographs but rumor is that under the rear jacket flap of each copy is a small packet of cocaine. The book's informal nickname on the street is Fifty Photographs in Fifty Seconds. Could explain certain voting patterns