In the past few weeks I've seen a slew of photographic fundraisers for Japan. Most operate under a similar model: Photographer(s) donate print(s), they sell (usually for a nominal price), the money goes to disaster relief. Although these efforts are probably more of a feel-good salve than real heavyweight solution, I have no problem supporting them since they are generally for a good cause. 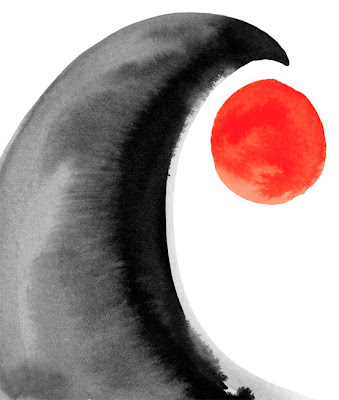 Portland Mercury cover, 3/17/11
"I can name that news event in two geometric shapes..."
In light of these fundraisers I'm reminded of a an editorial which recently endorsed the opposite approach. Pim Milo argues against photographers donating to charity auctions under the theory that they undercut the free market. The idea is if you give art away, people won't want to pay for it.

Fair enough. I suppose it's also true that if you go around having sex for free you'll cripple the prostitution market. The same thing could be said for giving food to the hungry. Did you forget there's no free lunch? And who's going to pay for concert tickets when stars are willing to play in private for close friends? In fact any gift threatens the free market system. Not only are gifts impractical, they reek of socialism.

You probably see where I'm going with this. I think the idea of being stingy to preserve "market value" is absurd and asinine. The problem with Pim Milo's approach is that it presumes that everything in society has a price and that every societal transaction is driven by financial motives.

Sadly, he's half right. Most societal decisions are guided by Smith's invisible hand, and the world is heading further in that direction every day. For example, here in Eugene we have a 73 year old baseball stadium which is about to be sold to the highest bidder and converted to a shopping mall. It makes sense in pure economic terms, but from any other perspective it's ridiculous.

Do we want art bound up in that equation too? If anything has the potential to exist outside the market system, surely it's art. If we can't give away photographs once in a while, what kind of world do we live in? One where we all clutch our belongings close to us, terrified to let anything go for less than free market value? No thanks. I'd prefer the world in which photos are given and received and swapped and forgotten and found, and cherished, and, at least occasionally, fuck the free market.

Milo's argument probably does make sense for a very small segment of photographers. If your work is collectible and routinely sells for several thousand dollars it may not make sense to give it away. But how many people fit in that category? A few hundred photographers in the world? For the rest of us, I've got good news. You can give away your photos without worrying about that crap.

You're free to start giving away photos today. I don't mean on random street corners (although that idea has possibilities). I mean occasionally and in important ways. Treat your work like freshly baked cookies. Give them to friends and family. Give them to charity auctions. Swap and barter with other photographers. Breath some life into the gift economy. You can send all free photos to me at...No, no, just kidding. But seriously, why wait for the invisible hand?

I'll get off my soapbox now. I have a free print of this photo for the first person who requests it via email. (*Sorry, no longer available)

Posted by Blake Andrews at 8:36 AM

I've personally been doing my best to undermine the prostitution market. I can't say that I've had much sucess though.

OK, now for a more serious response:
Great post, this blog is my favorite photography blog and I look forward to your posts and opinions and humor.

"I'd prefer the world in which photos are given and received and swapped and forgotten and found, and cherished, and, at least occasionally, fuck the free market."

I'll second that, I'm getting sick and tired of the free market and the almighty dollar. By the way, I'd gladdly buy a t-shirt with the slogan "Fuck the free market", maybe that could be your fund raising effort for Japan.

"For the rest of us, I've got good news. You can give away your photos without worrying about that crap."

Yeah, I'm one of the unwashed huddled masses that doesn't get thousands of dollars for his photos and I'm resigned to always being part of that class. One of the things I've always tried to do i to give photos back to the people I take pictures of. It's not always possible as I take photos at fiestas in Mexico and finding the people after is often hard to impossible, but I at least try.

Admirable post. Also a big fan of the blog (albeit relatively recent). A breath of fresh and sane air in this lunacy they call "free-market society".

I enjoy your article (as always), but it impelled me to look at Colberg's, whose summary of the original makes it sound rather less asinine than it does here.

I'm not a photographer. But if I were, I'd worry about how to make ends meet. I'm alternately repelled and amused by the worship of "Fine Art" (so capitalized!) photography, but magazine publication, newspaper publication, web publication and certainly book publication don't pay, so I suppose the options are "Fine Art", teaching, weddings, and some other fanatically pursued niche. (My wife briefly worked with the man who runs Japan's, if not the world's, premier studio of instant noodle photography. His noodles come in broth that, thanks to his trade secrets, steam and bubble far more convincingly than in your or my everyday reality.)

Perhaps the money-making photographers could donate the money they get from a print or two, rather than the prints themselves.

Ah, the free market. If only the gummint would get off the backs of industry. Let the free market dictate how much effort (if any) should go into preventing (or quenching) meltdowns in nuclear reactors! Anything else is socialism.

Good post, thank you. I live between USA, France and Japan. (Currently in Fukuoka, Japan).

By the US standards, Japan and France are largely socialist. (By the Japanese standards, America is the third world, sorry.) If you want "pure" capitalism you can also go to China.

By the way, most of the prefectures in Japan have not been affected by the quake in any way. It's business as usual here, despite what you may see on your TV.

is that a picture of a weed-wacker?! Crazy!

It's looking up through a basketball hoop in the backyard of my old house.

The belief that their photographs are really worth that much monetarily is a mass delusion of many photographers.

It's sort of absurd to think that Alec Soth wouldn't be Alec Soth if had given away his prints or sold them for really cheap. How can that possibly have any bearing on who gets into the canon or not? Essentially then every museum should be filled with only the work that's worth the most monetarily.

Clearly, it's more complicated than that I think you get what I mean.

People are getting links and attention they never got before because they have a specially designed "pray for Japan" poster or photograph for sale. So while they maybe be giving something away, or for cheap, the lost income on the art is a marketing expense. That sounds cynical, but who would hang a tsunami-themed poster in their living room?

The Portland Mercury image reminds of a Georgia O'Keefe: http://contentdm.okeeffemuseum.org/cdm4/item_viewer.php?CISOROOT=/gokfa&CISOPTR=440&CISOBOX=1&REC=5