Although I've always been a fan of Kertész, this is one photo of his that never did much for me until recently. 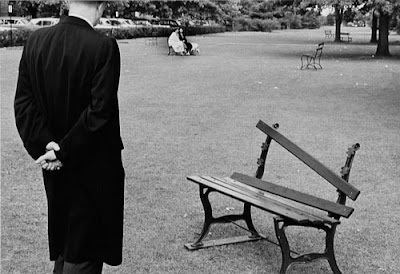 New York, 1962, André Kertész
Big deal. It's a guy staring at a broken bench. What makes that so great? At least that's what I thought before last week.

It turns out my friend George owns a print of this photo. Last week he brought it our monthly photo group and I got a good close look at the thing and, as some photos do when encountered for the first time in person, especially when wine is involved, it transformed.

The thing I noticed right off is that the man isn't looking at the bench after all. He's looking at the couple in the distance. I was never able to see this before on the web, and even looking at the photo in a book it's not very clear. But in a real live print his gaze is unmistakable, and it changes the whole photo.

Suddenly the couple isn't just a background element. It's the subject of the photo. The nearby bench? That's just a red herring. No, the couple is what the man is looking at. They're about 100 feet away. All of the sudden the picture's space has expanded, along with the mystery. What makes that couple so interesting? The man stopped at the bench presumably for a reason. Why isn't he looking at it? That question becomes the new twist.

Then there are the tones which I'd somehow never noticed before, probably because I'd never paid much attention to the couple. Looking last week I saw that the couple and the man's hands are small white islands in a sea of grey. What's more, these white islands form the corners of a triangle with the broken bench as sides. Like most of Kertész' best, this photo only works in greyscale. 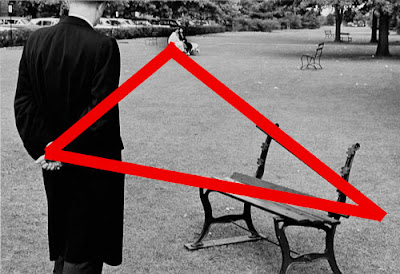 Wow! How the heck did he see that? I'm looking at the photo years after he shot it and I can barely see it. But to approach such a scene in real life, calculate the forms and perspective, wait for the gaze and hands, and quickly whip off the frame? Dude was in a serious zone.

But the plot thickens. The day after seeing this photo I stumbled on some background info in The Ongoing Moment. According to Geoff Dyer, the couple is Kertész' wife, Elizabeth, talking to a mental patient she'd recently taken an interest in. The man with back to the camera is Frank Thomas, Elizabeth's business partner. And, oh yeah, one last thing. Frank Thomas is blind. He's not looking at anything.

So wait a minute. He knew the people? Was the whole thing a setup? Was he in a zone or wasn't he?

I'm afraid there's no black and white answer. Like the photo, any interpretation works in shades of grey. Of course those shades may shift over time.
Posted by Blake Andrews at 7:21 PM

"And, oh yeah, one last thing. Frank Thomas is blind"

That to me adds a lot of interest here. Has he been instructed to "look" in their direction? Did someone physically turn his head in the direction of the couple?

The pick up of the triangle is particularly good.

Sean Davey, an excellent Aus photographer, is part of a photographic collective called "Broken Bench", named after this image.

Reality facts shouldn't be of our concern (except only encyclopedically)if the photographic facts can narrate a strong story.

But in this case the photo tells a different story depending on what we know about reality.

You see a triangle whereas I rather see square (with the remote bench echoing the couple)...

A reason why the "stare" (which is not a stare...) is not clear could be also because the head is captured with this background with cars. The cars are pointing in one direction (to the right and could be that on a small print/jpg format it affects the viewer interpretation of the stare.

What I find intriguing in this shot (and regardless the real story behind) is the broken bench, juxtaposed with the remote couple, and that other bench. With the man seen from back and seemingly contemplating the scene it gives some sort of mixed voyeuristic psychoanalytic dimension to the picture, as if there was some riddle or symbols here.

Now of course the real story put a different light on it, but finally I find that the mystery of the photograph is still holding.

Strange that always I interpreted another thing. I saw the triangle but for me is so important the fact that a lonely man in front of a broken bench is seeing a couple sitting together in a bench. Like a play of counter parts, one with all the pieces working and another broken. Maybe i am romantic. Now i know about the blind man and the relationship of the people include the photographer i can add new meaning to the photo. I shoot sometimes to my family and friends and i like to play with composition and some story but i don't direct them. I like to think that Kertesz only take advantage from what appears in front of him without arrange the scene. Thanks for share.

Is that the full frame? It seems a bit square for what I assume was 35mm.

Yes, I've checked a few images online and they all show this framing. The ratio is just under 1:1.5 which is consistent with 35 mm. Maybe the hidden triangle makes it seem more square?