In response to this query someone suggested I write about photography in Uruguay and I realized that geez, I know nothing about that country. What the heck does Uruguay look like? It definitely counts as original and unexplored, assuming of course you don't live in Uruguay.

Within a few seconds of wondering, I was buried in images of Uruguay via a Google Image Search. Even though I had no idea what to expect, somehow most results seemed unsurprising. There were photos of the soccer team which had recently been in the World Cup semifinals, scenic vistas of the capital city Montevideo, tropical beach scenes, etc. Touristy fodder. 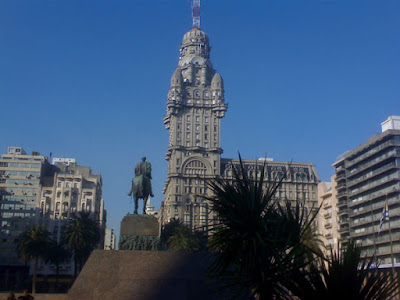 Palacio Salvo, taken from Plaza Independencia, Montevideo, Uruguay
Looking at these images made me wonder if any country can honestly be expressed in photos. Can you gain any deep knowledge about a place from just looking at pictures? If I showed you a photo of a famous American monument would it tell you anything about the U.S.? 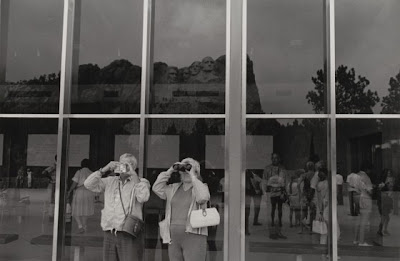 Mt. Rushmore, South Dakota, 1969, Lee Friedlander
Maybe it's better to take the opposite approach and consider each photo just on its own merits. It is what it is with no burden to describe a place. Of course in the end they end up describing things anyway, and quite literally, but if you want to really know a place you'll probably have to visit it.

Nevertheless I kept looking through Uruguayan photos, and gradually unearthed some interesting ones. I really like this satellite image of the capital Montevideo. Great form, and something about the washed out blue feels very placid. Maybe that's where the Uruguayan flag got its colors? 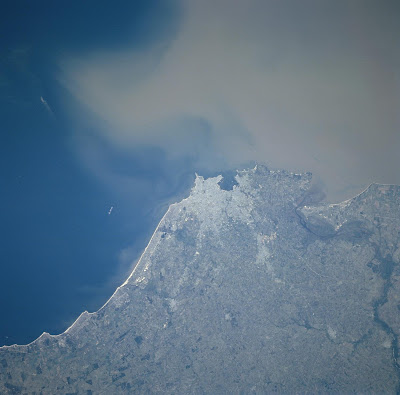 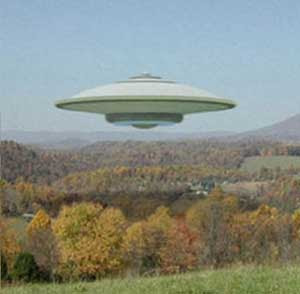 I think what I like best about this is that it's so perfect. The image is nicely centered, frozen like a still life above rolling hills. Most images of UFOs are blurry grainy blurs shot nervously on the fly, but this is the ultimate counter example, obviously fake. Wonderfully fake. "The most chilling aspect of any UFO case," says the article with the photo, "is usually a report involving the abduction of humans for research purposes." You won't find a photo like that in any tourism brochure.

Here's the soccer ball used in the 1930 World Cup in Uruguay, which Uruguay won. 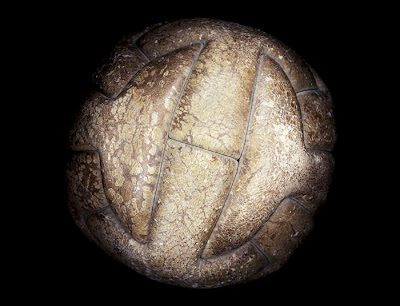 It's part of a whole typology of old soccer balls shown here. They're perfectly centered like the UFO photo but in this case I trust the images are authentic. 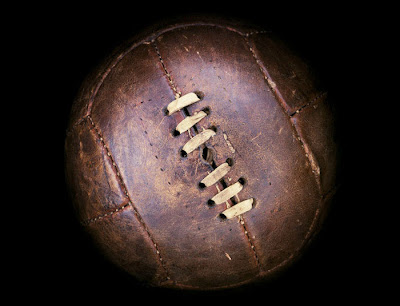 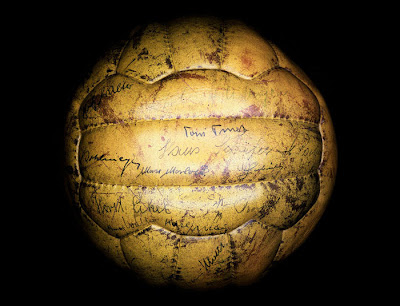 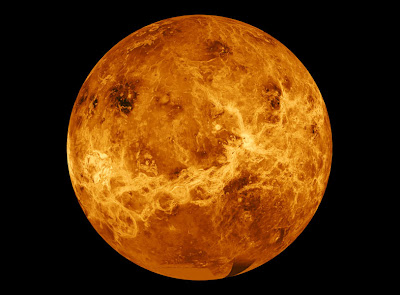 I have no idea what the thing below is but I like the photo. It looks like something out of Evidence.

LP: Uruguay, Dept. Montevideo (cultivated in La Plata), "Echinocactus mammulosus var. hircina"
The caption is tangled in the midst of a scientific abstract which mentions the word Uruguay. Maybe the photo was taken there. I can't really tell. All I know from the photo is that scientists are sometimes wacky and free-spirited, and they like to measure things.

The moment I saw the photo below I was drawn to it, 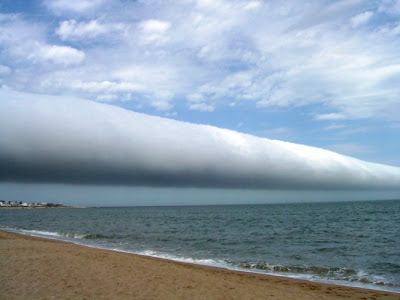 Maldonado, Uruguay, Daniela Mirner Eberl
not because of what it depicts but because it reminds me of a shot I took in Cape Cod last summer. 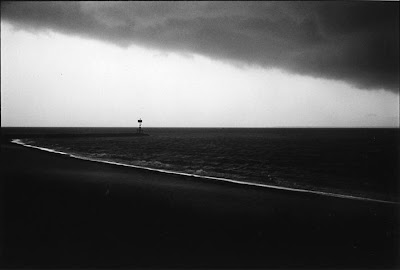 Photographs work like that sometimes. They carry all sorts of baggage, and it can be hard to approach them from a fresh perspective. Earlier photos can interfere.

In the late 1800s the photographer Luis Pastorino published an album called Fotografia de Montevideo, composed of 24 albumen prints depicting Uruguay's capital city. I'd never heard of this book before but apparently it's something of a collector's item. The current asking price on eBay is $2800. You can see the whole book here. I think the photographs are beautiful. They have definitely interfered with my perception of Uruguay, in a good way. 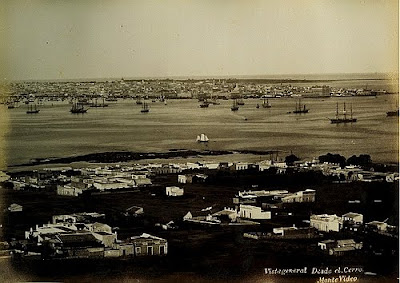 Vistageneral Desde el Cerro, 1880, Luis Pastorino
If I showed you a famous Uruguayan monument would it tell you anything about the country? 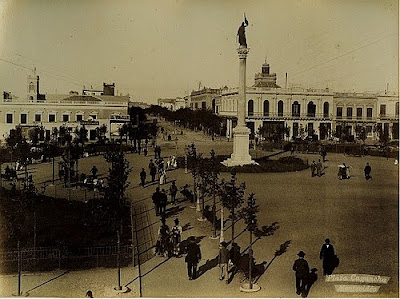 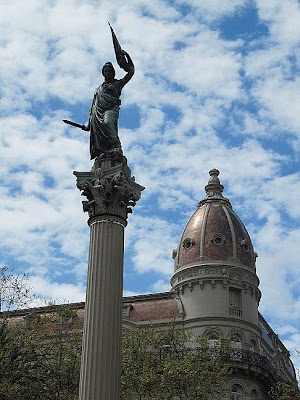 To me the statue looks slightly altered. Maybe it's the reversed camera angle? Hard to say. Some photos —maybe every photo?— don't offer much info aside from what's in the photo. You've got to supply your own baggage. But look at the sword. At some point in the past century it's had a dose of Viagra.

I suppose Pastorino's images might have qualified as tourist fodder 100 years ago but they still have great power. They don't make tourist fodder like they used to.

More work by Pastorino can be seen here, including this shot which I love. 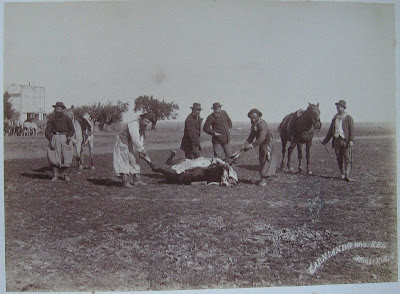 Pastorino had a good sense of where to stand with the camera. The way the various peaked forms in this image mimic the skyline could only happen from one spot. 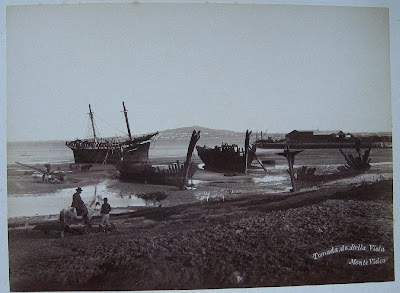 Tomada de Bella Vista - Montevideo, Luis Pastorino
Who was this guy? I can't find much on him online besides his photos, but he obviously knew what he was doing.

Maybe someone in Uruguay has more info? I know that about 100 people have linked to my blog from Uruguay over the past 4 years. Who are you? What's your story? What's Pastorino's story? Send an email or some photos. Let's start a conversation about something none of us were thinking about just yesterday.
Posted by Blake Andrews at 4:37 PM

Hey, i did a essay about vacations with a lot of photos from Uruguay and i manage the archive of my father who photographed Che Guevara in Punta del Este. You can see the gallery here or the first photo book i did with photos of vacations, some of Uruguay, here

This just in from our Uruguayan correspondent Heidi Lender:

I laughed so much at your latest post on Uruguay. Count me as one of your Uruguayan blog links.....a California transplant.

Didn't know squat about this country until last Dec-Jan, when my husband and I randomly passed through -- a stopover on an Argentinian-Brazil holiday. We celebrated the New Year in Garzon, a tiny pueblo of 200 people, a ghost town somewhat brought to life by Argentina's star chef Francis Mallmann. The place reminded us of Sonoma or Healdsburg fifty years ago (or what it must have been like)...town square, surrounded by farmland, freshly studded with olive trees (meant to be the biggest olive plantation in the world). In a wild fit of spontaneity, three days later, we made an offer on an 83-acre ranch on the edge of town, complete with 24 cows, one horse and a dilapidated farmhouse. We renovated the house over the summer and are spending our first "season" here now, back to SF at the end of May.

As i understand it, Montevideo has about 2 million inhabitants, the entire country just over 3 million.....which says a lot....ie. farmland everywhere. I had no idea, but the beach resort of Punta del Este and environs are the Hamptons of South America....the a-la-mode pulse of the country, pumping with all-night parties full of beautiful peeps from Brazil to Argentina during the summer months. It's a small, but loud pocket of this tiny country, with endless quieter beach hamlets peppering the coast, all the way to brazil. We are 25 km inland from the chi-chi beach scene, surrounded by a smattering of interesting and eccentric expats....artists, designers, writers, etc...a quiet paradise, to be honest.

Photographically, I think knowledge (maybe not deep knowledge, as you say) of a place comes from a mix of environment and people...both viable subjects here, a story of impressions at the very least. Am stewing on some project ideas, and will be happy to keep you posted if you are interested.....FYI, attached are some random snaps I've taken around Garzon and a link to a FT article about our new hometown....it's been quite a journey!

Also, thank you thank you for your blog...love the subjects, the questions you raise, your witty prose....You seem to say (in such an entertaining way) what others wouldn't dare....so appreciate that!

BLAKE ANDREWS IM AT STARBUCKS AT 1080 FOREST AVENUE IN AMERCA CITY PORTLAND MAINE . WE CAN MEAT HERE IN 15 MINUT NO? I AM WEAR BLUE SWEATER ND BLACK SLACKS. LOOK FORWARD TO SEE U!!

=== Sent from my Anatov Wireless device ==

SERGEI I AM 3,000 MILES AWAY WEARING JEANS AND GREEN T-SHIRT. LOOK FOR ME NEAR THAT HOT DOG STAND DOWNTOWN IN 5 MINUTES.

BLAKE ANDREWS I LAUGH AT THIS} IF YOU TELL ME SOONER YOU ARE AT SAUSAGE CART I MEET YOU THERE BUT HOW CAN KNOW IF U DO NOT ELL ME ???
IM IN TAXI CAR NOW. HOW LONG IS 3O0O MILE WHEN CONVERT TO KILOMETR? WHY THARE IS 2 AMERICAN CITY NAME PORTLAND. IN USSR WE POINT ATOMIC MISSLE AT BOTH CITY . TO COVER ALL BASES - LIEK IN AMERICA GAME BASE-BALL

I like how Uruguay is this short hand for impossibly distant, exotic place. Having lived for 3 years in Buenos Aires, I sort of see the country as a boring backwater, a quasi breakaway province that is nearly identical to Argentina culturally and linguistically.

Coincidentally the blog Urbanautica posted some pictures by Tania Feghali, several of which were from Uruguay. I particularly liked her series La Espera, taken as bus stations: