I've been photographing for years and using public urinals for even longer, but until recently I'd never had any luck combining the two pursuits. Finally a few weeks ago I made what I consider to be my first successful (insert your definition here, here, or here) photograph of a urinal. 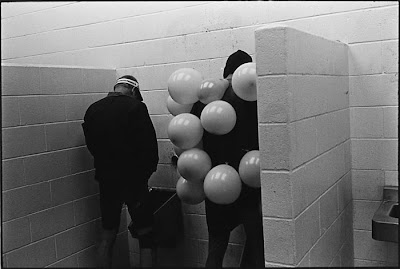 I could tell you what was happening but it's probably better if I don't. Suffice to say I was waiting in line to pee and there he was. I wasn't nervous taking the photo. It had to be taken, so I did it.

That's not usually the case. Usually in public urinals I find it very hard to make photographs. There's always that question hanging over you. What are you going to say to someone who confronts you? Some photographic mumbo jumbo about magical light and mirrors and toilet forms? Something about punctums maybe? Trust me, it won't fly. Taking a photo of an unzipped stranger is a good way to get a fat lip.

That's why a lot of my urinal photos look more like Matt Bialer's below, shot in a nervous hurry. 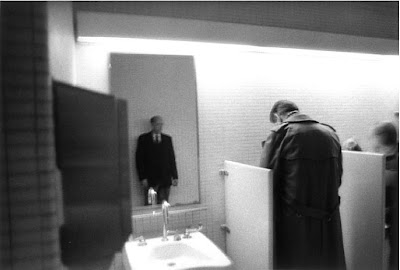 Don't get me wrong, this is a great shot. But it's not a calm one. The angst of the photographer has seeped into the timing, and in fact it's part of the photo's power. What if he gets caught?

Despite the difficulties, some have succeeded. My alltime favorite urinal shot is by Nils Jorgensen. 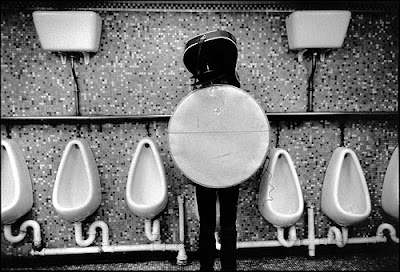 The toilet forms are beautiful, not to mention the gorgeous drum and guitar. If confronted Jorgensen might plausibly use them as cover. "They had to be photographed," he might say, and he'd be right. Maybe that would work and maybe not, but even if that explanation resulted in a fat lip it would be worth it for that shot.

Of course, as Elliott Erwitt has shown, a lot of public peeing occurs outside of urinals, outside of buildings even. 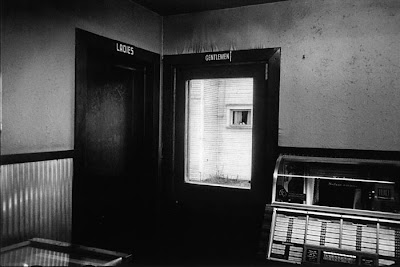 Western U.S., 1954, Elliott Erwitt
Sometimes all it takes is a dead-end alley. 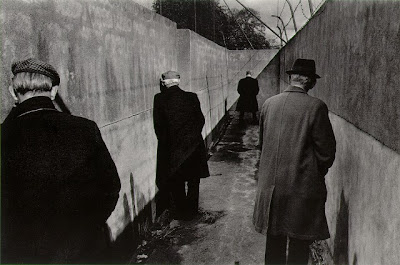 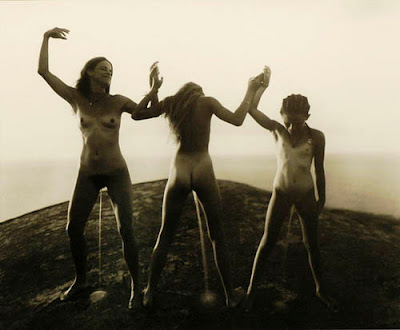 The Three Graces, 1994, Sally Mann
A row of porta-potties can provide some shelter. 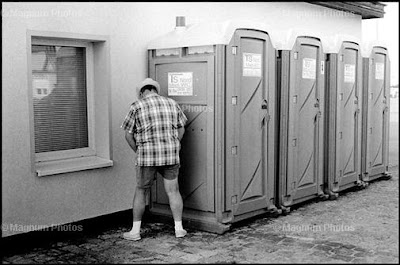 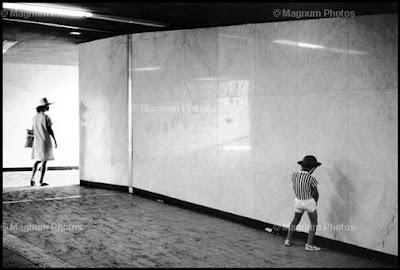 Japan, 1977, Elliott Erwitt
Freed and Erwitt are just the tip of the Magnum iceberg, so to speak. Many of their colleagues have also taken on the urinal challenge, with varied success. 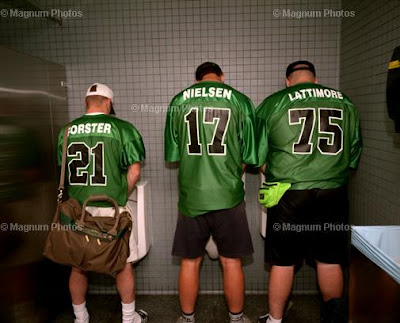 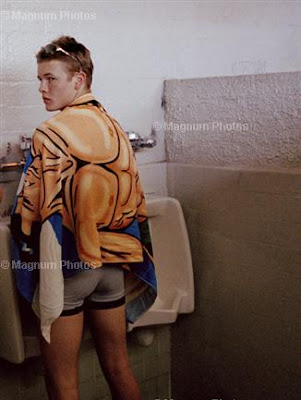 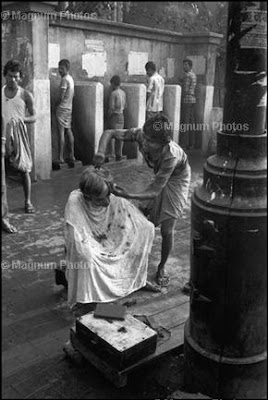 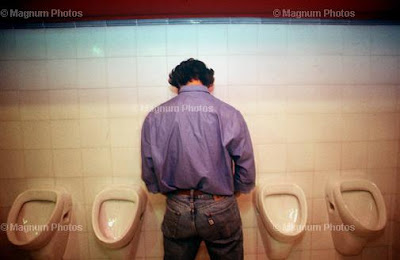 Byblos Discoteque, Riccione, Italy, 1996, Alex Majoli
But the king of public urination photos has to be Magnum's Peter Marlow, who seems to have a particular fascination with bodily excretions. His Magnum portfolio contains everything from public urinal shots, 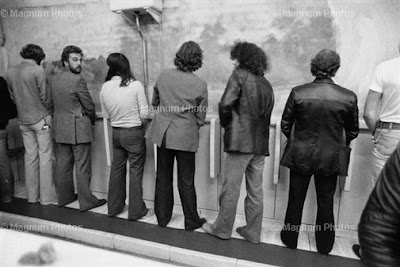 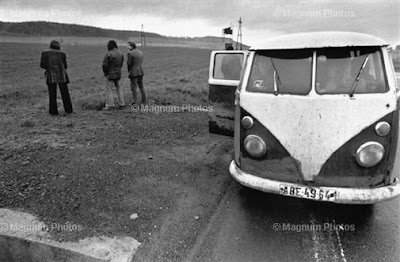 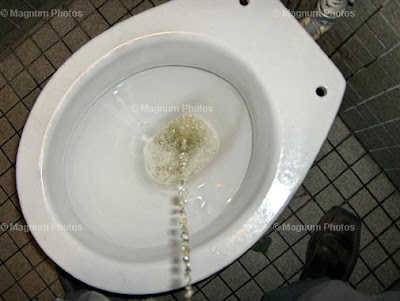 The Rencontres d'Arles, 2004, Peter Marlow
Is there nothing he won't photograph? To be honest I've taken some version of that first-person peeing shot many times. Don't act so shocked. You know you've done it too, if you're a hard-core male street photographer. It's an inevitable byproduct of carrying a camera everywhere and needing to pee several times per day. Luckily it only takes one hand to operate each instrument simultaneously. And the bonus is it's the one type of urination shot that's unlikely to result in a fat lip. If someone confronts you, you get to ask them what they were looking at.

Unfortunately it's hard to make this type of shot really work. The tendency of pee is toward uniformity. If you've seen one first-person piss shot you've seen them all. And if by some chance you haven't seen them all, there's always the next pee break.


Addendum 4:30 PM: After reading this post, Richard Bram sent along the following lovely photo he shot while living in Kentucky: 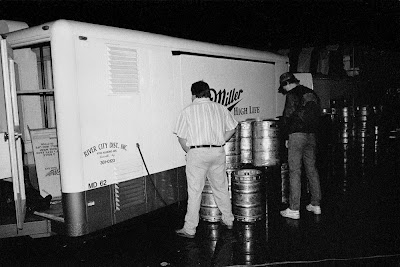 I may regret doing this, but if anyone else wants to send me their favorite (tasteful) urinating photos, either your own or by others, go ahead and email them to me. If I get enough good ones I'll publish them in a future post.

Addendum, 2/21/11: Last night I went to see Yo La Tengo at the WOW Hall downtown. I hadn't paid much attention beforehand to the full bill but when I arrived at the show it turned out the opener was none other than The Urinals, a seminal band from the early LA punk scene which is still very much alive and kicking. The Urinals were awesome! And of course so was Yo La Tengo, and yes I took some photos in the men's room during a set break. Strange the twists life takes...
Posted by Blake Andrews at 9:54 AM

there are a good photo about that theme made by Doisneau, the pigeon indiscret (the indiscreet dove).
http://www.easyart.com/art-prints/Robert-Doisneau/Le-pigeon-indiscret,-1964-54482.html

I didn't think anything would beat out the Koudelka- but I think the Mann just may...

Here's one by Craig Semetko. A fat lip for the photographer's one thing, but as toilet pitfalls go it surely pales in comparison to being laughed at by an icon of womankind...

At the Kentucky Derby.

I have a few good ones, I'll send them soon.

Justin Cook has one of the most iconic pissing shots I've ever seen: http://www.justincookphoto.com/album/moments?p=1#10

Lovely selection. :) Well, I don't know how it works for communal peeing in men's rooms, never having visited one while being used. I thought it was a kind of solidarity - otherwise it wouldn't be shared space but separate stalls. You could perhaps try this as an excuse. Say "I thought you wanted to be seen, otherwise you'd use the stall" :)

Dude! I love that you made this post. It inspired me to make one, too.
http://mattrothphoto.com/blog/2011/02/baltimore-dc-photographer/blake-andrews-pissed/

I take it back. I have a few urinal shots, but they all suck and wouldn't make the cut in any decent edit.

hey blake. just realized you are missing a classic from this collection

god I suck, you have it here http://blakeandrews.blogspot.com/2011/03/continuing-earlier-stream-of-thought.html