The end of photobooks

This conversation has gotten me started thinking about the end of photobooks. Not The End, but how certain books end. One passage in particular caught my attention:

Colberg: Just in general, for you what makes a good photobook? If you think about your favourite photobooks what is it that you like about them?

Meeks: This is subjective, of course, but a book has to be tightly edited. But for me the most important thing is that it has an open-ended quality, that it doesn’t feel like you close the book, and it’s somehow resolved.

I'd been spending a lot of time with Iowa recently, so when I read this I immediately thought of that book. The final image is pretty memorable just because it is so different from what comes before. 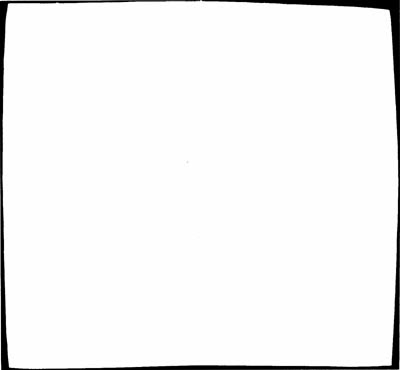 It got me wondering, what about other well-known books? How do they finish?

On the one hand it's a superficial question. There's more to a book's lasting impact than the final image. Still, I think the last photo often carries extra weight. When you come home from a concert you don't remember the 5th song (deadheads not included), you remember the encore. For me it's the same with photo books. The last thought is the one we're left with, and presumably the photographer or book designer plans accordingly. So what can we learn from those images?

Probably the most famous final photo is the last image in The Americans. In one fell swoop it sums up Frank's months on the road while putting his own very personal imprint on the entire project. US 90 en route to Del Rio Texas, 1955, Robert Frank
Frank derived much of his inspiration from Walker Evans, not only in terms of documentary style but in his careful attention to sequencing and editing. Frankly the final shot in American Photographs has never resonated with me. It looks like a photo you might see at a state fair. But I know its placement must be no accident. What was Evans thinking? 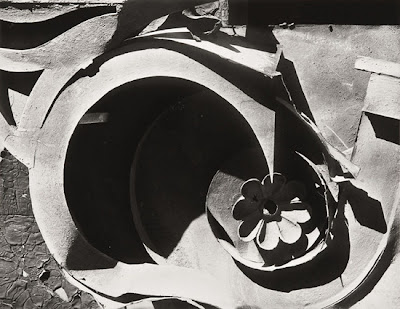 Tin Relic, 1930, Walker Evans
The last image of Immediate Family sticks with me as much because of its caption as the image itself. It puts the cap on things while dredging up all sorts of new thoughts. 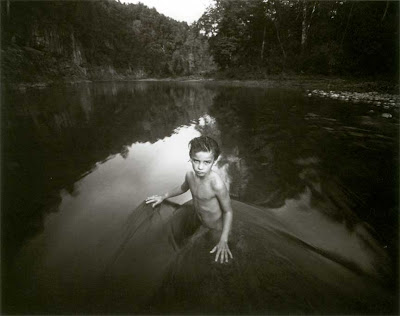 The Last Time Emmett Modeled Nude, 1987, Sally Mann
Maybe Mann had Exiles in mind? Its final photo has a similar structure to the Emmett shot. The last image in Koudelka's book seems to hint at the future direction of his photography, away from Gypsies and toward Chaos. 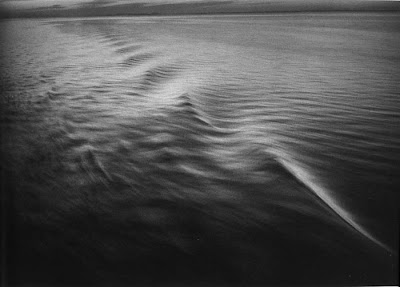 from Josef Koudelka's Exiles
While the last photo in The New West shows where we're all headed eventually. 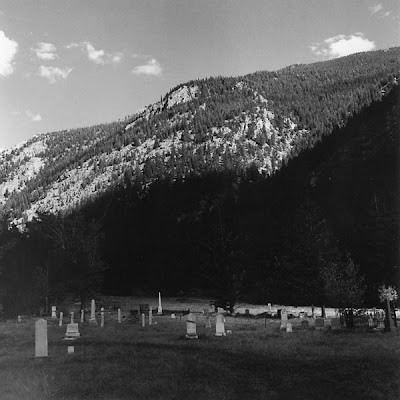 Pioneer Cemetery. Near Empire, Robert Adams
Or perhaps we'll just wind up as piles of bones, like the last photo in The Ballad of Sexual Dependency. This photo works well but it's hard to know how intentional its end position was, since Ballad is basically the printed version of an ongoing slideshow with no firm ending. Skeletons Coupling, New York City, 1983, Nan Goldin
Goldin's photo makes a good companion to the final image in The Animals. I have to say I find this photo pretty boring. There are so many classic images in that book and he chose this one? Knowing Winogrand he may not have paid much attention. His life was more a stream of photos than of individual projects. Maybe with this photo he's saying it could've ended with any one of them, and it did, though no one knows which one exactly. 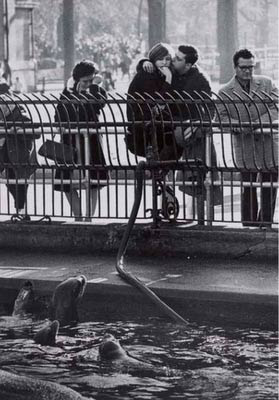 New York, 1969, Garry Winogrand
The final image in Eggleston's Guide is typical Eggleston. It's so banal it almost seems meaningless. Yet I've always found this picture loaded and menacing. Peaked hoods in the south creep me out. I wouldn't make this my last image before bedtime. 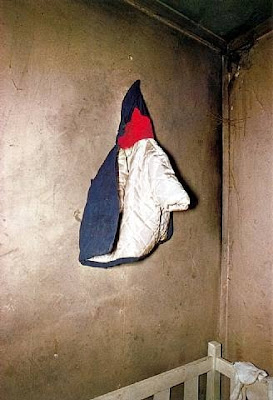 Near Jackson, Mississippi, 1970, William Eggleston
Maybe the last picture in Social Graces would work better. It closes the door on a warm upbeat note. 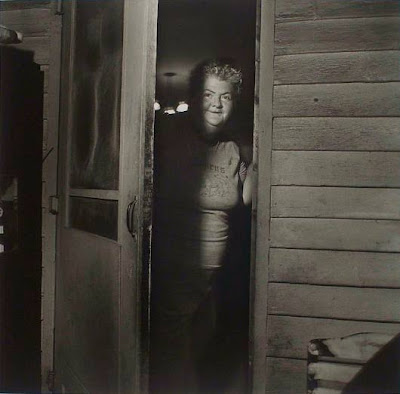 Pat Sabatine's Twelfth Birthday, Larry Fink
American Prospects? Not so upbeat. But if Sternfeld was forecasting the decline of empire back in 1983, his prediction has proven fairly accurate. 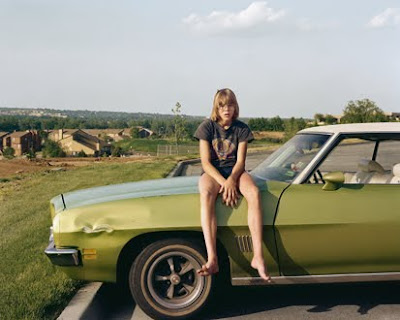 Kansas City, 1983, Joel Sternfeld
If any book manages to capture that post-decline zeitgeist it's Sleeping By the Mississippi. For such a symbolically loaded book it ends on a surprisingly literal note. The last photo below is one of only two in the book depicting a bed and the title river. 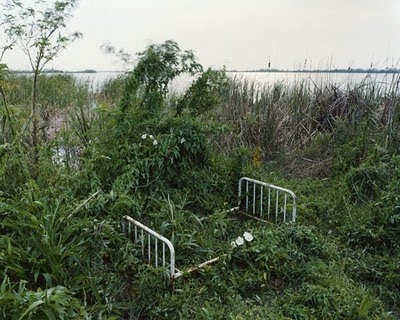 Venice, Louisiana, 2002, Alec Soth
I can't tell how Friedlander's Self Portrait finishes. In my 1997 copy it's with this photograph. 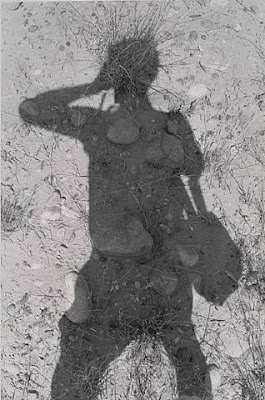 Canyon de Chelly, 1983, Lee Friedlander
But I know that isn't the original ending. It's too recent. Perhaps the next-to-last photo below used to be the finale? Or did he rearrange the entire book? Hopefully someone with a copy of the first edition can chime in here. 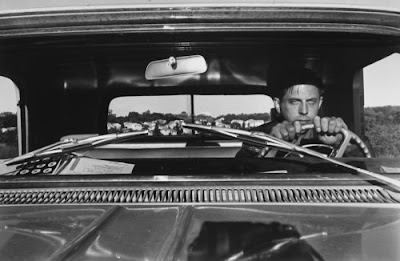 Haverstraw, NY, 1966, Lee Friedlander
I've got the same problem with The Decisive Moment. I have no idea what the last photo in that book is because it's impossible to find, even in most libraries. There used to be a website faithfully depicting every page in the book but it's been pulled, presumably under legal pressure. Excuse my rant but this situation is completely ridiculous!! One of the most important books ever made and few people know exactly what's in it. Pardon my French hero but that's fucked up.

What's that? You want to hear Sgt. Pepper's? Sorry, but the only way to listen to that album is to pay $3000 for an original pressing of the LP. Take my word for it, it ends with a bang not a whimper.

I think I'm going to make my own HCB ending. Every day for the next week this post will conclude with a new HCB shot. Maybe it will change the dynamics of the entire post. Maybe not. Either way you're bound to find the last image more memorable than whatever that 5th photo was. 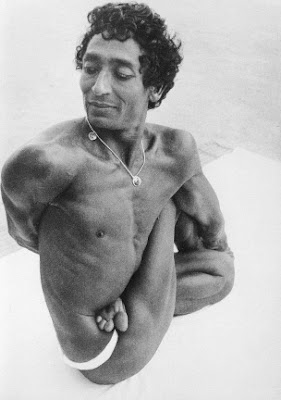 from Portfolio magazine no. 3, "Cartier-Bresson in the Orient" 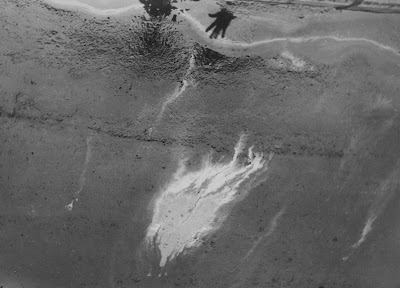 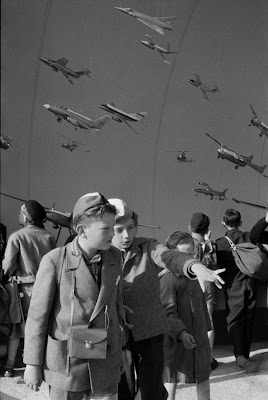 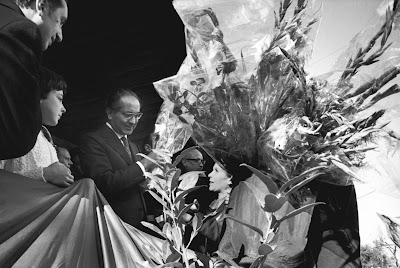 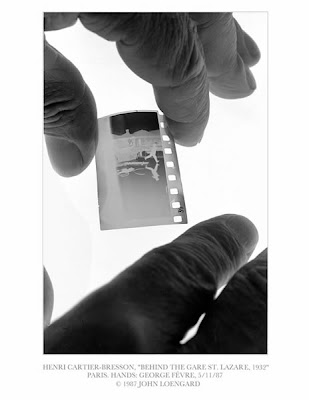 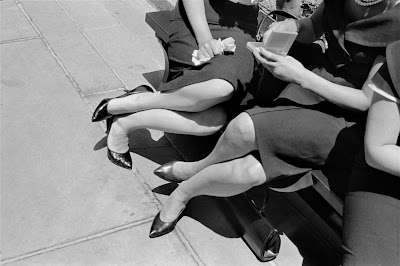 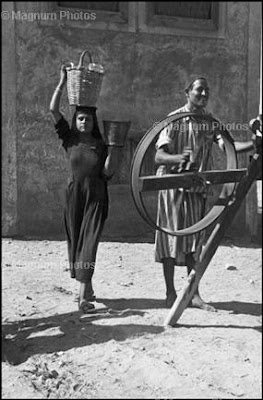 Loved this, Blake. The last image of The Decisive Moment is definitely not at all a widely known image of HCB's. In fact, I would say the same holds true for nearly all the images in the second half of the book.

Don't keep us in suspense, Cary. What's the final image in the book?

the book is here

it's a long way to the final image (126 total), but it surely isn't a well known HCB photo

Famously, the scenes in Chris Killip's In Flagrante are on average rather bleak. Yet Killip avoids total despair and degradation. The last photograph but one shows a boy contentedly and perhaps proudly on the shoulders of his obviously impoverished father. The last, however, comes as a shock: A woman (tripped over? dead drunk?) lies on the pavement (as the Brits call sidewalks) while in front of her a person with a stick that both is not long enough for and also is unnecessarily stout for a walking stick stands in front of her. Is the person looking at her? Hard to say. Perhaps the person has just clubbed her. An alsatian also stands near her, uninterested. We see in the foreground the shadow of what looks like somebody pushing a heavily loaded shopping trolley. This is not just any of the photographs, it's a culmination.

Sirkka-Liisa Konttinen's Byker is about life in an area of working class terraced housing in Newcastle that was then due for demolition. (I have the 1988 Bloodaxe edition, which I think is identical to the 1983 Cape edition. The last photograph, and it alone, shows the (dreary) housing that was put up to replace what was demolished. This seems a common approach in such books.

akk, that link doesn't seem to work for me. But Cary has kindly emailed me the final image which I will post at week's end.

Not a memorable image, but isn't the last Winogrand shot an animal looking back at the human animals? Don't know if Winogrand was involved in sequencing but sure the editor was.

really? checked the link again and it works here. I just went to www.archive.org and typed in the link you provided in the article. Several versions of that site are available

When I searched web archive it brought up a list of pages from 2007, but each page simply repeated what's on the current page.

That Friedlander shot is the cover image of 'Like a One Eyed Cat'. . Did he use it twice?

Cover shots are probably a good topic for another post, but they're the favorites. I like reporting on the underdogs.

yeap, that's the one on the website as well