OK Europe, listen up. You call that puny haze an ash cloud? My kid's firework puts out more smoke than that. You wanna see the real deal? This here's a friggin Ash Cloud! 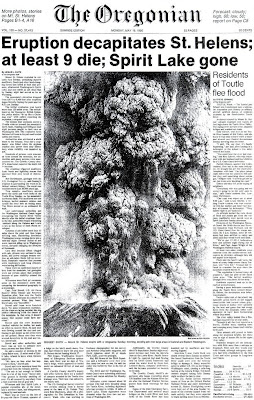 Portland Oregonian, May 19, 1980. Forecast: Cloudy
Exactly thirty years later that photo still says everything. It isn't just on page one. It is page one. But if you want to attach a number, that's 24 megatons of red-blooded American thermal energy.

Mt. St. Helens lost 1300' feet in elevation just like that. Poof! A lot of what used to be the mountain turned into weather, and a lot of the weather fell on Portland 50 miles southwest. It was like a winter storm in the middle of spring. 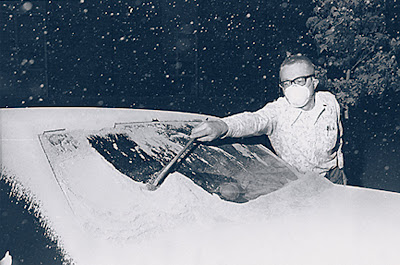 Claudia Howell for The Oregon Journal
At first the city was excited. But gradually the realization of what actually happened began to sink in. Nature had dumped a constipated load, and the crap was everywhere. 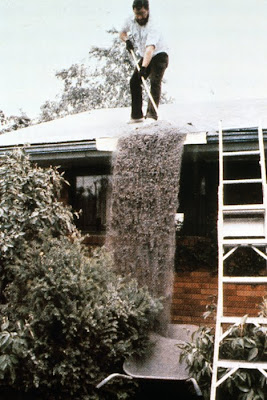 USGS Archives
It was like thermonuclear winter. Authorities were forced into action. But they didn't sit around some conference room sipping Perrier wondering which flights to cancel. The entire airport was invisible. The city was invisible. City canceled. 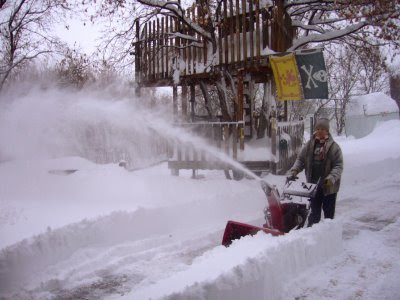 OK, that last photo is actually a person blowing snow from her driveway. But you get the idea. Mt. St. Helens, my European friends, was a damn Ash Cloud!

Hmmm. In retrospect maybe it wasn't such a hot idea to write this with such American bravado. It could come back to cloud my trip to Europe next week, assuming my flight isn't canceled on account of ash. Hey Europe, you know I was just blowing smoke, right? Still BFF? Um, hello? Europe?...
Posted by Blake Andrews at 6:57 AM

My St Helens was Nature's energy. If you want to see the Megatons of American energy book a trip to the Hiroshima. The Peace Museum is what everybody must visit in order to have their eyes opened. Believe me, it would change your concepts of "energy", " megatons", and "American". By the way, shooting street is a lot more fun in Japan than in "Europe".

But how do you account for the fact that Eyjafjallajökull in Icelandic roughly translates to "Let Freedom Ring" in English? Mere coincidence?

"Hmmm. In retrospect maybe it wasn't such a hot idea to write this with such American bravado"