Two years ago I wrote a short post about Diane Arbus's photo of Colin Wood (below): 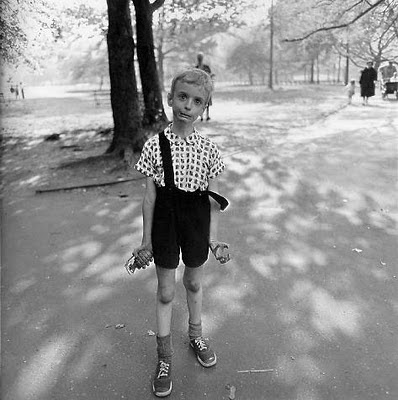 Yesterday Colin commented on the post. I thought his reaction was insightful enough to be worth sharing. Warning: Heavy therapy ahead.

At seven, I weren’t no angel. I could be cruel, lash out, victimize: fear made me feel weak, a feeling I detested for shame and contested to my detriment. She likely recognized this conflict in me as her own and with this pic unconsciously captured both the shallow-boiling anger and malice within me as well as a kindred, violent alienation within herself. I was her mirror. In this way the clenched fist and silly grenade express what ailed her, me and many temporal beings who comprise the world: wounded love taking refuge in pride."

Posted by Blake Andrews at 5:03 PM

holy crap, think it's really him? Awesome. I've always wondered about that kid. He's a mirror for a lot of us, I think.

The fact that he used to eat straight Junket out of the box says tons. I'm probably around the same age and it was the age of better living through chemistry...Junket was mainly sugar with chemical flavoring and rennet (the stuff that makes milk into cheese.)
I'm sure the photo will forever make me think of Junket now!

Blake, this is a wonderful circle you've given us. It underscores for me the relevance of wandering the streets looking for ordinary people to photograph.

I used to wonder why I chose to photograph certain people, and not others. Of all the many people that I would pass by, why them? Years ago I realized that it was because I saw something familiar that I could identify with and relate to.

That insight changed everything for me. I don't just photograph what I see, but how I feel about what I see. I set off to learn about others and I wound up learning about myself. A life in photography can be an interesting journey.