Digging through the U of O stacks a few weeks ago I found a first edition of Lewis Baltz's The new Industrial Parks near Irvine, California. It was buried in a corner, binding down. I couldn't tell what it was at first, just that it looked old. I don't think it had been checked out in years.

As sometimes happens, the book found me just when it was supposed to. New Topographics has seen a resurgence of interest lately all over the web, bringing the spotlight to related topics and photographers. A paperback edition of Industrial Parks is set to be republished in August, and Baltz has been given some thoughtful reconsideration lately on Tyler Green's Modern Art Notes (especially here and here). With Baltz et al undergoing a general reassessment, it seems like a good time to re-examine the book that made his reputation.

The first thing one notices about Industrial Parks is its design. The cover is grey. The typeface (sadly abandoned in the new paperback edition) is of course Helvetica. The photos are on odd pages. The captions on even facing pages describe the photos with a number and specific street address. There's no introduction or author statement or any excess language other than a mechanical translation of each caption into —what else?— German. All in all the book has the bland modern feel of an industrial park near Irvine, California.

Baltz / Monochrome Mondrian
The photographs themselves play right along. They're rectangular (Green makes extra note of this fact), formal, precise, and clinical. Baltz has transformed what I assume was a normal looking world into a sequence of shapes and lines which don't describe any specific place as much as they convert it into monochrome Mondrians. The funny thing is that by abstracting themselves from reality, the photos do wind up describing Irvine. Or is it Costa Mesa? Or Santa Ana? Tustin? The section of Southern California surrounding Irvine is so sprawling and indistinct that the towns blend, their boundaries of no more significance than abstract lines.

The amazing thing is that Baltz managed to describe not just the place but the structure of the shifting future economy, then in its adolescence. At this point it's hardly news that Mom and Pop storefronts have given way to internet shopping from placeless warehouses, but Baltz's photos were the canary in the coalmine. These weren't your Mom and Pop vernacular landscapes anymore. They could be anywhere, and by the next century they would be.

When I realized that Baltz captioned his photos with specific street addresses, my first instinct was to Google Streetview them to see how they looked now, just as I did last year with Shore.

Sadly, this effort proved to be a bust. Most of the buildings in Industrial Parks can't be Streetviewed because Google hasn't yet expanded into those territories. The few buildings that do appear in Streetview are photographed with wide angle camera from far away, which is not how Baltz shot them. Streetview rephotography may have worked for Shore, but not so well for Baltz. 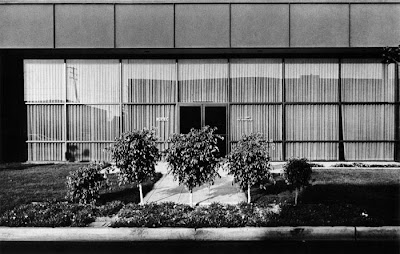 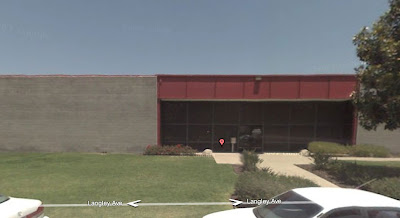 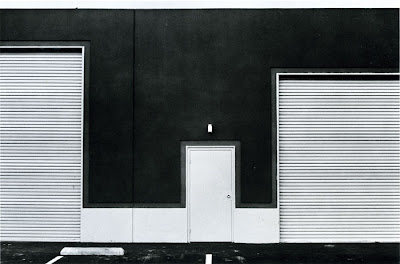 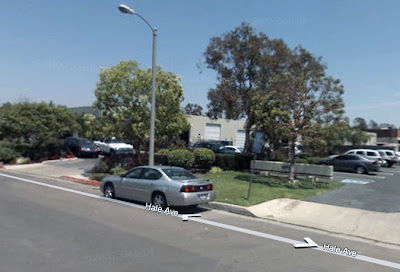 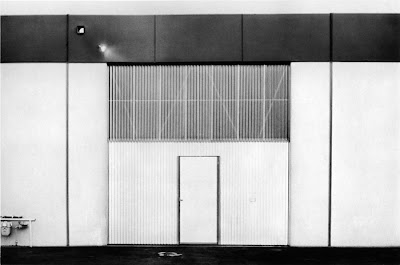 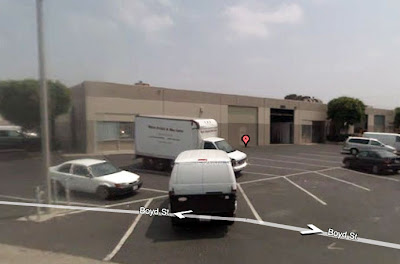 1611 Boyd St., Santa Ana, CA, 2010, Google StreetView
To get a truly re-photographic comparison would require boots on the ground in L.A. Unfortunately that's about 850 miles outside my telephoto range, not to mention 3 dress codes outside my fashion range. But, miracle of miracles, a little snooping on the web turned up someone who'd done that very thing. LACMA blog contributor Sarah Bay Williams had photographed in Baltz's tracks and posted her findings. I think the results are pretty interesting. 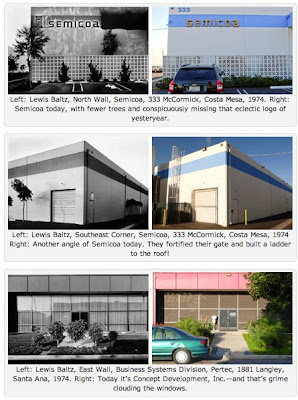 Lewis Baltz rephotographed by Sarah Bay Williams
Alas, my copy of Industrial Buildings came due recently. Before returning it I scanned some of the images I wanted for this post but neglected to take good notes on the captions. As I was pulling this post together last weekend I realized I needed to see the book again.

According to the library data base it was checked in, but when I went to the stacks it wasn't there. I searched all the shelves nearby, including books with backward bindings. No luck. Could it actually be checked out? Doubtful. More likely it was re-shelved incorrectly. No one would find it for several more decades.

Standing there in front of all those books I couldn't help thinking they resembled a monochrome Mondrian.
Posted by Blake Andrews at 8:28 AM

Did you check the shelving carts? Books often wind up on those. There is a method to the madness of how they are arranged, which can help to cut your search time down a little. Also, library staff will put a search out on items, and sometimes they succeed in finding them.

I haven't dug through the stacks in a while, but it's always great fun when I do. What saddens me the most is when I find a book that has pages razored out of them. Heartbreaking.

It is funny to me that he included the addresses as the descriptions. I find that is the second question people ask when they find out a work is a photograph.

First: What is it?

Second: Where is it?

Third: When is it?

It is like "how many licks to the center..." I start to wonder what the fourth and fifth question would be.

I think the comparison to contemporary views of Baltz's buildings highlights his great skill at 2) framing the shot, and b) using available light to make an otherwise mundane structure come across as monumental. He is finding beautiful visual material from buildings that were not designed to be beautiful.