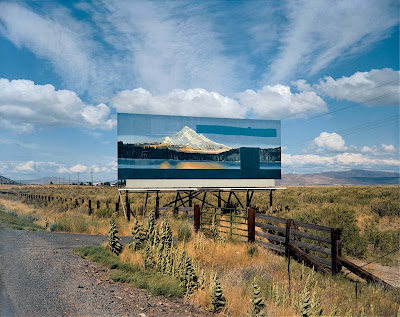 Digital screen capture of a film photo of a painted billboard of my favorite Oregon mountain, by Stephen Shore

When people discuss digital vs film, it often comes down to tech-talk semantics. People say film has a certain quality, or that digital is easier to control, or that one or the other is capable of finer resolution or capture or whatever, all of which seem rather boring questions to consider. At this point any effect can be digitally emulated. Worrying about which characteristics are specific to a digital or film image seems futile.

To me the more interesting question is, how do the tactile aspects of a camera effect the pictures you make with it? For me that is the big hump with digital. I hate the chintzy plastic feel of new cameras. They don't engage me. I'd rather look through a viewfinder than at an LCD screen. I enjoy dealing with film, unwrapping it like a present, spooling it, and winding the advance with my thumb. Like records and bicycles, film cameras may be old fashioned yet they feel real and unmediated and good. The result of all this, for me at least, is that I make different photos with a film camera than I do with a digital one.

I thought of this today reading a recent interview with Stephen Shore, and remembering another one he'd done a few years ago. Comparing the two interviews highlights the shifting effect of digital cameras on Shore's photography.

Stephen Shore Then: "8×10 color is very expensive. Back in the 70s it cost $15-20 a shot for the film, the processing, and the contact sheet, now it’s twice that. And to do good work, you can’t just take pictures that you know are going to be good, cause then you’re never going to learn anything or experiment. So the economy came in that I didn’t take two of anything. And so I realized I’m going to have to decide what it is I want. Standing in front of a building, where do I want to stand? Where in this intersection do I want to be — and not take five of them and try and figure it out later?

What I found happen was, after years of doing it, it forced me into a kind of sense of certainty. I figured out what it is I want, and so there was no reason to take more than one. And now when I take pictures with any camera, I still shoot the same way. When I look at students’ contact sheets and I see a picture of a lampost and there are five pictures of a lamppost from the same place - it drives me crazy. Why would the second picture be any different from the first picture?

...There a number of photographers who are fabulous photographers and they switch to digital and they produce a lot of crap. Somehow it affects their discrimination. Somehow this knowledge that it’s immaterial, that it’s free, is sort of the opposite of the $15 a shot discipline. It somehow affects how some people use it. I don’t think it’s inherent in the medium that it affects people that way, but what I’m saying is, there’s no reason a photographer can’t make every picture count.”


Stephen Shore Now:"I’m using digital more and more. I recently got a Nikon D3x. After using an 8x10 for almost 30 years, I find I think in 8x10 terms. I take only one picture of a subject, even with a digital camera, unless I’m photographing something that is in motion or changing. Still, looking through the viewfinder is not the same as looking through an 8x10 ground glass and working on a tripod. But I’m getting better at it, and much of my new digital work seems as focused as my view-camera work. Also I get to have the pleasure of making many more images in a day."
Posted by Blake Andrews at 6:00 PM

I found even the cost of 35mm fairly prohibitive, so I learned to shoot frugally early on. But I'll still take the metal bodies, manual advance, focus and (large) clutter free viewfinders that come with the tactile goodness of film.

Interesting post. I am not sure about the ability to make digital look like film, though. But that doesn't matter too much.

What matters in the end is always the image, and I think Stephen Shore is right about the danger of overshooting when using digital.

yes, you can overshoot with digital. 5 shots of everything, which will give you a headache in editing. however in the same time digital puts an image in perspective. If i go out and shoot 2 films and spend half an hour to develop them and then have to wait to go to the darkroom and print some contact sheets etc etc I'm personally more inclined to hang on to images that aren't worth it, simply because there was so much more effort in producing them than with digital.

Like Blake, I much prefer a mechanical camera over a digital anything. I also much prefer the dynamic range of medium format color negative film over digital.

Shooting film changes my head, when I shoot digital, I shoot more, but not better, and probably worse. I get caught up in the action of shooting and the commotion of shooting distracts me from seeing in the way I do when I'm moving slower with film.

I also like the elapsed time between when I shoot and when I get around to processing the film and seeing results. A bit of distance helps me be a bit more dispassionate about editing.

That being said, I've also become ruthless about editing my digital, shooting my brains out on assignment, I can cull 100 out of 1000 very quickly. But then assignment work is very different and is used for different purposes and has no bearing on anything personal for me. It's to satisfy a client. A different head is called for.

That is my main reason for switching the equipment and media that I work with when I shoot for myself, to draw a very distinct line between commerce and personal expression.

Totally agree. A lot what I like about sticking with film has little to do with the actual print. I like the metal feel. I like having to kneel in the shade to reload medium format film. I love the almost spiritual feeling I get reloading 35mm canister by hand, and then covering them with the same bright green gaffers tape that my grandpa applied liberally to all of his audio/visual equipment. After all that, they also come in handy as conversation pieces with a lot of interesting people at various drinking establishments.

Just about every day while I'm walking about the thought of overshooting crosses my mind. If I take two exposures of a scene, I feel like I'm starting to overdo it.

I think the Ansel Adam's series on the Japanese Internment camps during WWII was done with about 200 exposures. Nowadays a child's three hour long birthday will get that much or more.

Agree totally with this: "To me the more interesting question is, how do the tactile aspects of a camera effect the pictures you make with it? For me that is the big hump with digital. I hate the chintzy plastic feel of new cameras. They don't engage me."... after years and years of rangefinder use I switched to full frame digital and have been for the last 4-5 years until last week when I re-engage and fell head over heals in love with a new Zeiss Ikon which I now own and shoot daily... it's a joy to use a really well engineered piece of kit!

I think Mr. Shore's comments over time are quite consistent--he's saying that it's easy to overshoot with digital and that shooting large format film does impose an economy or restraint on the photographer. But just because you shoot digital doesn't mean you can't force yourself to shoot with the same kind of restraint. It just requires more discipline.

The idea that digital makes you shoot too much is a cop out. It just ALLOWS you to shoot too much if you let it. There's no reason you can't stick your DSLR on a tripod and shoot in a slow and considered manner.

Don't get me wrong, I love film. In the end, all cameras are just tools and you need to choose the right one for the job...