Tierney Gearon's Explosure series has gotten nice attention lately, with glowing reviews here, here, and here among other places. Add my name to the list of fans. Many of these images are simply mind blowing. Not to mention she has a kick-ass name. Tierney Gearon. Teirney Gearon. Tierney Gearon. It rolls off the tongue like a multiple exposure. 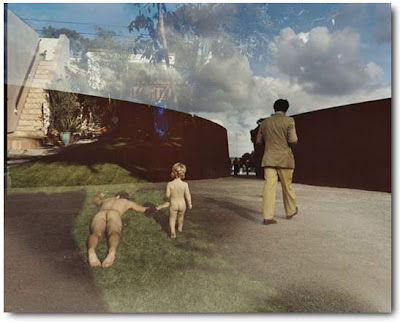 Frame 67, 2008 by Tierney Gearon
Gearon's work and the attention it has received sets the stage for an interesting mental experiment. Imagine that instead of creating her multiple exposures haphazardly in-camera, Gearon's had created the same images using Photoshop. The final images would be exactly the same, but the method of creation would be different. How would this effect our understanding of the pictures?

We don't have to look very far for an answer. Thousands of such images have been created by, for example, Pedro Meyer 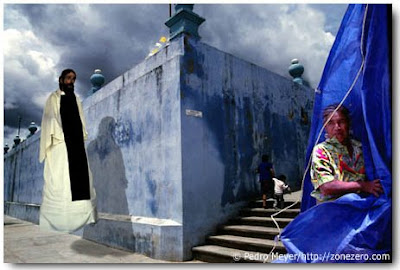 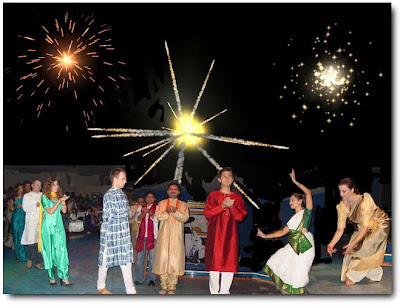 Diwali by Rajaram Sethuraman
These photographs may be visually entertaining but I don't think you'll find them at Philips de Pury.

Back in the pre-digital days the same effects were achieved by Uelsmann. Although he was a wizard in the darkroom, for me Uelsmann's work hasn't aged particularly well. His photos are about as interesting as listening to someone describe their dream last night. A fun story but I tend to find waking life more compelling. 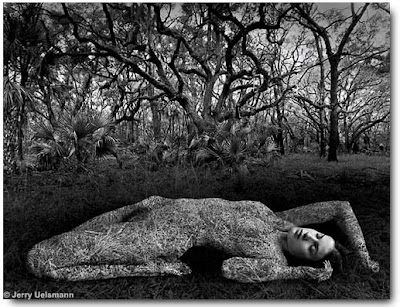 Untitled, 1983 by Jerry Uelsmann
So what's the difference with Gearon? Why should we treat her work differently?

To me, Gearon's photographs are the perfect example that process DOES matter. Her photographs are one thing with no supporting info, but when one learns how she made them they take on another dimension. You mean she made these by accident!? That's wonderful!

I don't think I'm alone in this viewpoint. Any time Gearon's images are shown in any format, it is always with a reference to Gearon's process. Process is important.

When I raised this exact point back in December it created shitstorm of comments. There are many many people out there who would disagree with me, who claim that only the image matters and not how it was arrived at. I will probably not change any minds with this post but to those people I would say consider the case of Tierney Gearon. Are her photographs the same as any Photoshopped collage? If the answer is no, then process matters.
Posted by Blake Andrews at 8:36 AM

If she took two sequential exposures using a digital camera, then combined them uncroped and unaltered in photoshop (say, using a screen filter to produce the same effect as a double exposure), would that impact the way you view her work? Is it the process of visualizing how the image will appear on the film that matters? Or is it the fact that the process takes place on film that matters?

How would that change your understanding of the pictures?

For me the issue is whether the work is about concept or content. If process is explicit and deemed important by the photographer, then that is concept. Generally I find this type of work uninteresting, though there are exceptions, like Moholy-Nagy.

Otherwise for me it is content that matters, when the process should not undermine the content, but be as invisible as possible.

I don't generally find Tearney Geiron's work very interesting. The Explosure images that I have seen are even less interesting. She is very deliberate about what she includes, especially the nudes and the kids. Whatever the method, she has deliberately selected the images to show. They are her choices. Some people find that interesting. I don't. So the process is irrelevant for me.

The key for me is that she has tapped into serendipity in a way that would be much less magical using Photoshop. Like street photos, each of these images was produced once, with a large injection of chance and no revision possible. This goes against the very nature of Photoshop, in which by definition revision is always possible.

I think Henri Cartier-Bresson is worth quoting here.
"Photographers deal in things which are continually vanishing and when they have vanished there is no contrivance on earth which can make them come back again." That quote applies only to the Pre-Photoshop world, which is the world that Explosure takes me back to.

I think it's fine for folks (e.g.,Robert) not to like the work. There is a certain recycling of motifs (nudes, kids, meadows) which can get tired. And of course you're right she enforces her control by deciding which images to combine with which.

I guess for me most of the work's appeal is in that magic accidental zone she's tapped into that seems largely forgotten in today's photo community. To make such strident exposures in a state of uncertainty is pretty rare in the hyper-planned, conceptual, digitally perfect context of much contemporary photograpy

"To make such strident exposures in a state of uncertainty is pretty rare in the hyper-planned, conceptual, digitally perfect context of much contemporary photograpy."

Problem is that Gearon's images, although made in camera, could also have been made in a very controlled manner. You don't know all the details of her process, so it cannot be excluded that Gearon works with some kind of control image to help her decide what she is superimposing on what. Maybe she makes, simultaneously, a digital shot of the scene to help her visualize what was on the unexposed sheet of film. Of course it still takes a great talent in pre-visualizing to make this work, but a lot of photographers I met know exactly what something is going to look like even before they've taken the camera out of the bag. Of course there is an amount of happenstance in Gearons' work, but to say that the work is relying on accidence is an unsubstantiated claim. But I do agree with you that the singularity of the images is part of the appeal of the work in a time where every image can be revised and edited ad nauseam. I am sure Gearon is aware of that too, even if it's only in the back of her mind.

Really? I guess we will have to take their word for it Mrs. Deane but I find that hard to believe. I've been shooting many years and am constantly surprised by what I find on a memory card.

This kind of montage/double exposure work leaves me cold. They don't really even fall into the category of photography....they are, perhaps, illustrations...but there meaning is too far removed from real events or scenes that they become just decoration...and there are prettier things to hang on ones walls.

There is a difference between a Photographer and an Artist who uses a Camera.

I've not seen Explosure, but I'll try to look out for it. The more I shoot the more I think that a final edit is a direct reflection of the shooting style or concept. It sort of takes first place relative to the individual images as it links them together.

Nick, for work that is digitally montaged I have the same reaction as you. It leaves me "cold" to use your word. But Gearon's work seems different, and the question of how it might compare is at the heart of my post. Is it really different, and if so why? For me there's something in the way she made them, not to mention the final images, which is really intriguing.

Anyway I think it's great to see such a wide range of opinion.