I'm a chronic bookhound but the number of books that actually come home with me is quite small compared to the amount I look through in shops. More typically I thumb through the pictures, get a general sense of the work, and put it back on the shelf. Once in a while the work grabs me and I look more closely at all the photos. But I still won't buy the book unless I'm really convinced. I treat the process seriously. I'm not going to invite just any old book to come home and spend the rest of our days together.

Inevitably there is one photograph which closes the deal. A book can be really good but if it doesn't have that one magic photo it stays in the store. If it has it, I take the leap. On a recent trip to Powell's I found a used book of Judith Joy Ross portraits with this image waiting for me inside: 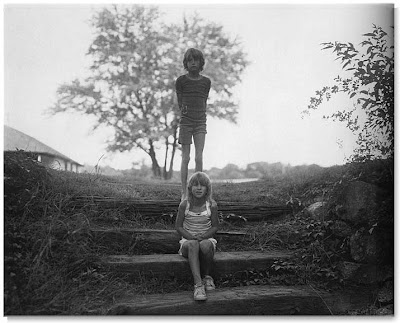 Eurana Park, Weatherly, PA, 1982 by Judith Joy Ross
I bought the book and have been enjoying immensely. Somehow I had overlooked Ross before. I'd mistakenly pigeonholed her as a children's photographer but her work goes far beyond that. As with all great portrait photographers her images have a way of penetrating to the interior of her subjects. Something to with the slow pace of 8 x 10 maybe? Something in its beautiful way of articulating what's important through selective focus? No. It goes beyond tools, beyond technique. A good portrait seems to result from a battle of wills in which, for the best ones —like those of Ross— the result is indecisive.

I think the photo above is a tie.
Posted by Blake Andrews at 8:16 AM