Charalampos Kydonakis: What Was He Thinking?

Charalampos Kydonakis, aka Dirty Harry, is a photographer based in Rethymnon, Crete.

"This summer I went to a Cretan sheppard folk festival. Inside a crowd of hundreds of people this scene caught my attention: A man, probably a relative of the girl, had hugged her and a priest nearby had grabbed her hand. It seemed weird to me. Usually people hold the hands of priests waiting for God's help. Now the priest himself had to ask God's help from someone else. I took 3 shots there and none of the three people paid attention to me. Probably the energy between them was more powerful than anything else around them. In one click I caught the priest's eyes closed. I'm not a religious guy at all but maybe that girl was an angel, giving light to a blind man. Well, I guess not. Just a science fiction tale of my mind for a moment there."

"I saw this guy (or was it a werewolf?) on a summer day near the seaside of my town, Rethymnon of Crete. I was amazed by his hairy shoulders and started to follow him on the pavement, trying to shoot a photo of him. I knew that the photos I took were disappointing, as the background was awful, full of cars and touristic labels. I didn't give up and continued following him. At some moment he entered the open parking space of the port of the town and stopped, crossing his hands like this, trying to remember where his car was. This was the moment I was waiting for. The asphalt of the parking was the background I was trying for 5 minutes to frame neutrally the hairy creature." 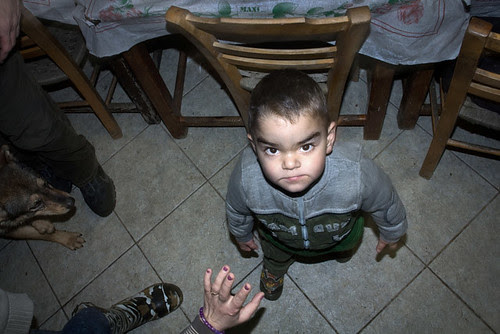 "I spent a night playing music with friends inside a local taverna in a small village near my town. The grandson of the owner of the taverna started to dance. Some people made a circle around him as usually happens in Greece when somebody gets up to dance. A dog joined the company. The boy seemed to enjoy his dance. When I went to take a photo he stopped dancing and looked at me this way. The last years I have shot photos of many people who got angry at me cause I photographed them without asking before. I think this boy was the most angry of all of them. I had interrupted him, he wasn't dancing for everyone. He was dancing only for him and his friends." 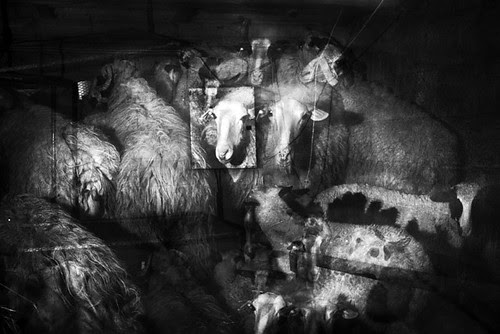 "One night on my cousin's farm I wanted to shoot photos of the sheep there. He told me that I should wait first and shoot photos after he had milked them, because they would get afraid and the milking would be impossible afterwards. When everything was finished I got in the shed and took a photo, then they got afraid and went outside altogether. This is a wireless flash double exposure click, in which I pointed the second flash on that rectangular box on the wall over the sheep. The word "sheep" in greek is used metaphorically to describe a herd of identical units with no personality and will. This box to my eyes before the click was something that could maybe distinguish that sheep's existence from the rest of the herd."

"In 2009 I bought a flash with a cable in order to use a tool I had never tried before. This photo was taken the second day that I had my new equipment. It's the only one I kept from a 2 hour night walk in the town of Aidipsos. After shooting a lot of uninteresting shots, I tried to make experiments with different angles to the flash direction. I think this shot with the glass shadows was the only one that night that had something from me in it. All the rest were just portraits of frightened people." 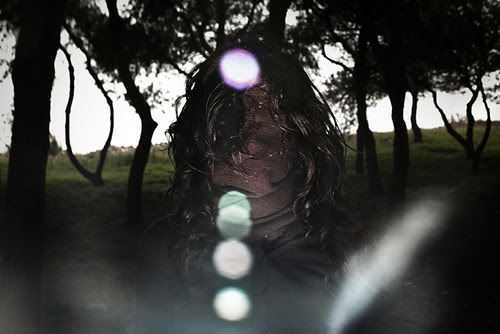 "This photo isn't a street photo, it's a portait of my girlfriend. We were walking in the woods and at some moment I asked her to hide her face with her scarf. Initially I shot the photo without the flash. It was too dark. I took a second shot with the pop eye flash. The light was too normal. Then came to my mind an older photo (below) where a random position of my flash on the cable gave this result with a shot on the opposite side of the sunlight:

I tried this time to understand how I had to place the flash so that I got a lens flare. I took some more shots of her, until I found the right angle to have the light effect. This photo made me understand that my girlfriend's thoughts are purple coloured.

"This photo is my first double flash exposure in one click. Not knowing yet what exactly I had to do, I first flashed the man and after some seconds with the bulb button still pressed I flashed the girl. My initial intention was to put two separate worlds together in one frame. When I saw the photo in the pc, I saw under the white confusing (and maybe connecting or disconnetcting) lines the top of the girl's t-shirt leading to the man's eye, shaped like a street. I don't know, maybe it was a man's black tear going straight to a girl's heart."

"After some hours of drinking and dancing at a wedding, it was late and not many people were still there. I sat on my chair to rest for a while. At the next table I saw one girl looking closely the fish in the glass bowl. I went right on the opposite side and shot a portrait of her with the camera behind the glass and the flash at the left side near her face and the glass. I didn't know exactly what the result would be or how the face would be distorted as the shot was taken instantaneously before I realized how I would frame and shoot under other conditions.

Maybe my descriptions refer a lot on my flash experiments while shooting. I try to create my own light and make pictures that wouldn't be this way under normal light conditions. The result isn't always the desired one. Sometimes it's the expected, sometimes better than the expected, most of the times worse, simply trash.

Photography will always be for me a game with light, aiming to a storytelling result. Sometimes it works, most of the times not. Always the upcoming question in my mind is how the following photos will be."

Posted by Blake Andrews at 8:28 AM

Dirty Harry never disappoints. There is always something of interest with each new image. Highly creative fellow. What else can be said?

Love this series as well.

Strong photos nicely described. Harry is the kind of photographer who never parts his camera. He shares with us his deeply personal and adventurous look at the Cretan life.