Ania Vouloudi: What Was She Thinking?

Ania Vouloudi, 25, is a photographer based in Rethymno, Crete. 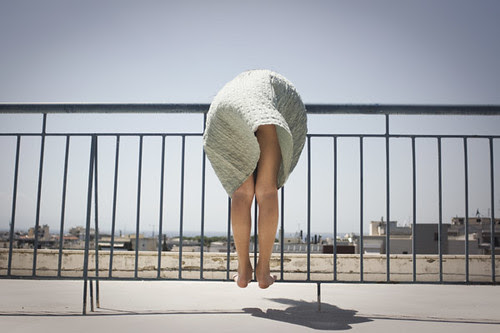 "My cousin had made me promise that I would get pictures of her, so that she would frame them and decorate the empty walls of her room. A year had passed and I hadn’t kept my promise. My cousin was let down by her role-model and I had a pain in my heart. This photo was taken on the terrace of my family home. I was visiting them after a long time away. The last day Maria gave me that look of disappointment again because I had to catch my plane in a few hours which meant no photos again. It was noon. I grabbed her hand. Time had come. Maria was happy. She wore her favorite dress and waited for my instructions. The problem was that I had no inspiration at all as I almost never stage people and things. The terrace was the only place that came to my mind. The floor was burning my cousin’s feet, so she stepped on to the railings. The rest came with the breeze."

"Grandma and Grandpa. The night before, I was sitting with them under dim light and around the round big old table, hearing stories from the Second World War. The next morning as I was doing laundry on the terrace I saw them down in the yard. I thought that it would be nice to take a family photo of them as I don’t see them often. I shouted. Grandpa is 96 years old and can’t hear well. Grandma doesn’t like being photographed. So, this photo belongs to the family album. A photo to remember them as they are." 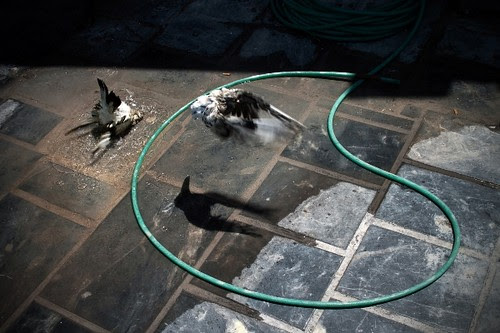 "This summer I had an exhibition with Lukas Vasilikos and Charalampos Kydonakis. When we made this decision I had less than half of the photos that I should have for our subject (street life in Rethymno, Crete), so I started wandering around the town and looking for those pictures that would be worth the frame. This is the last one. Looking for the last photo was the most difficult part. At the end of a walk with nothing interesting in my camera I saw those two birds doing something boring which I hoped could look interesting afterwards. I stayed there for a minute or two, then they flew away and I flew back home relieved."

"I was on a bench lying on my back after a very long walk by the lake. The weather was cruelly cold. The lake was ready to freeze. I was ready to freeze until the sun came out. I started feeling my fingers again, so I grabbed my camera and looked back. I saw upside down my friend smoking. I can’t say that I knew exactly what I was doing when I took this picture. Everything about that day, the place and that moment was strange. Tired and dizzy, with my head hanging from the bench, I turned my camera around and saw the photo that could describe the indescribable feelings I had."

"I don’t know exactly the reason why I took this photo. And I did it twice. I was having a night-search in a village of Crete. I was flashing everything that caught my attention. I am a construction engineer and I guess that those reinforcing bars attracted me because of my profession. The first photo was boring. The second photo would be the same and yet I took it. I wouldn’t be proud to admit it if this flying being hadn’t passed through. Sometimes you get photos by luck."

"This photo was taken last January in Bulgaria. This man was in a big square with another man. I saw them from far away doing some weird moves. The one was walking left and right lifting his knees very high and the other one was waving his arms up and down. They looked like they were rehearsing a great choreography but my logic said that they were just trying to beat the cold. I don’t enjoy realism, so I kept thinking of them dancing. The one of the two men who seemed to have the starring-role didn’t stop when I approached him. After I put my camera down he came to me, I showed him the photo and told him the only Russian word that I know (I thought it was Bulgarian): “Krasivyj”. He saw it with no interest, smiled, pointed at me and repeated the word I had just told him. I smiled too and left them to continue their important rehearsals." 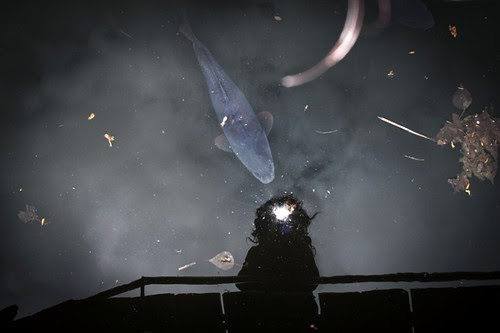 "I was at the zoo of Berlin, kind of depressed as all the animals seemed depressed too. I was not in the mood for photos. I stood up on a small bridge and stared at the fish underneath me. It was a very relaxing thing to do as I caught my self forgetting about everything and taking out the camera. I was thinking of nothing bad, nothing good, nothing but a fish. I had a fish in my mind."

"I remember everyone drinking and celebrating for days because of the upcoming marriage of a beloved cousin of mine. Kids were also in this crazy mood that everybody was all those days. One night I left the beers and the circle dance and went up to my aunt’s home. When I got out of the toilet, I saw one girl climbing up the door frame. In the time that I managed to remember where the buttons of my camera were, the girl had reached the roof and another girl was standing underneath her. I know or remember nothing further."

Posted by Blake Andrews at 6:28 PM

It seems that you enjoy what you are doing.Keep on the same way...

I have missed the "What were they thinking" posts. Good one.

I would like to start doing more of these WWHT? profiles. If there are other street photographers out there interested participating please send an email with a link to your portfolio. Thanks. -B

Amazing post..Exciting to find out what was she thinking in each photo!

Would love to be involved in something like this! Link to my latest work documenting a little of a recent 2 days in london - iphone4 for this set as i've not had change to look through my camera shots.

But then one would need your email address, wouldn't one? Or is it cunningly hidden? Or not so cunningly, and one is stupid.