Andrew Kochanowski: What Was He Thinking?

Andrew Kochanowski is a photographer based in Detroit. 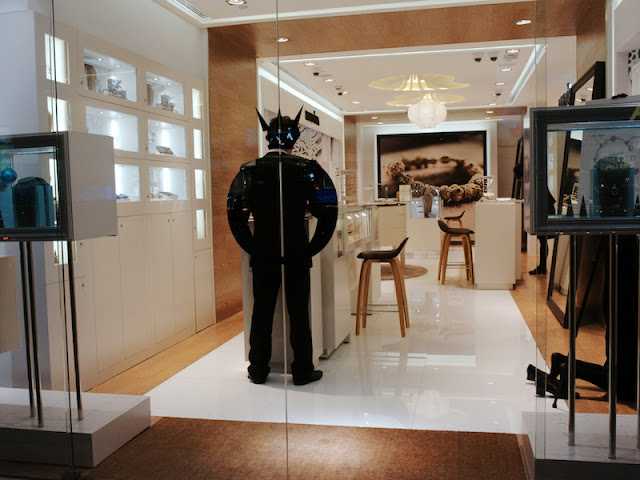 "I was taken to Hong Kong by business for several months last year, where the sheer opulence for display in the Central District was tempting. The number of sales assistants in the most humble stores dwarf what we Americans are used to. This was at closing time, and as I was walking by I saw the manager outlined behind the very obvious brand-name sign on the door. At the same time I glimpsed the female assistant, on her knees with her shoes coming off her feet, straightening up the wares on the right. There is no use denying what that all suggested. I framed it the way I did to put the horns on the man and cut off the woman's hands.  The screen-like suggestions of the boxes on either side and the main display of the store add to the fairly obvious set of metaphors in this photo, though in all honesty I didn't see them at the time. This is a one-snap, walk-by, so neither halves of the couple noticed my presence. " 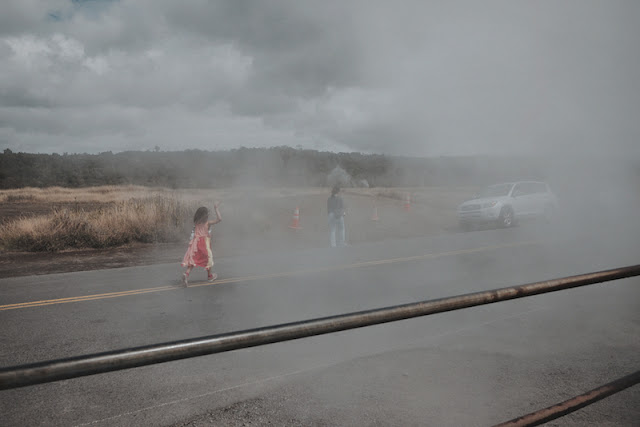 "The place where this was shot is the Volcano National Park on the Big Island in Hawaii, so that should substantially reduce the mystery of the fog. The big crater in the park is surrounded by hot vents which make for an eerie atmosphere when they feel like it, and they felt like it combined with an overcast sky that day they felt like it. I look for places like that when I go out shooting, as I suppose most street photographers do, and when I find one I tend to hang about for a while to see what happens. Here a family stopped by to look at the the vents, or maybe the rim of the crater behind me. The little girl was enraptured by the hissing or the sulphur smell and didn't realize that Mom was leaving town…  all I had to do was stand there and snap. This was one of those photos that I felt would be interesting right away because the little girl's arm was swinging up like she was scared or anxious. She wasn't. That's what l photos do, lie to you and make you convince yourself you understand them." 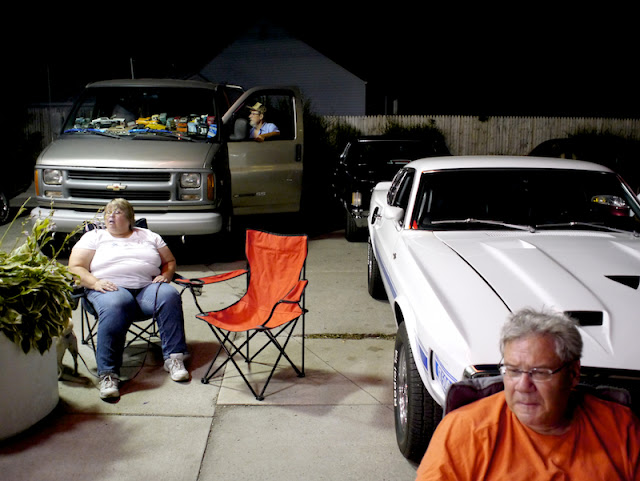 "My eye wanders about a lot until I see something from which I can build a photo. I figured out a while ago that's how I tend to go about my business, though it really isn't conscious. Some people listen to music when they go out photographing, but I can't do that, I need to relax and let things come to me. The first thing I saw in this scene was the man in the background silhouetted by the window of the junked-up car. Yes, it was a start, so I came closer and realized that the white and orange colors were repeating themselves. Tropes all of course but at least there were two of them so I began thinking there may be something in the photo. Mostly there is nothing no matter how much we hope, but ever so often things like to fall into place. I was at a gas station which holds classic car meets-- there goes that question of the old Camaro-- at around 9 pm. I stood and waited, snapped a few shots when the little dog was closer to the center of the frame, but knew it was going to be OK when the lady's expression turned to…that. No one noticed me. I was not classic enough. As soon as I shot this frame I left and went home." 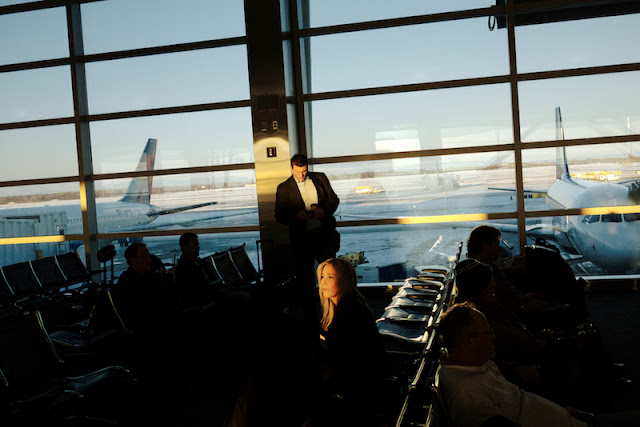 "This is a traditional light play snapshot. I was waiting for a morning flight to New York at Detroit's airport, with the eastern sun poking through the windows behind me. I did nothing to find the scene. It found me. All I did was dial back the exposure to make sure I wouldn't blow out the woman's face, and moved so that i could get the tails of the planes into the frame for a little balance. Blue and yellow always works to create something, I think. I ended up sitting next to the man who is concentrating on his BlackBerry, and learned that he had been well-known NFL football player, an All Pro actually, on his way to New York to interview for a talent agency to take him on as a client. He had retired from pro football a year back or so because his knees had taken a beating, lost a lot of weight, and had hopes for an announcing career. The woman on the other side of him asked for advice about her high school football-playing son. I didn't tell him I had taken his picture, but figured he'd by OK with it even if he knew, being a former player and all." 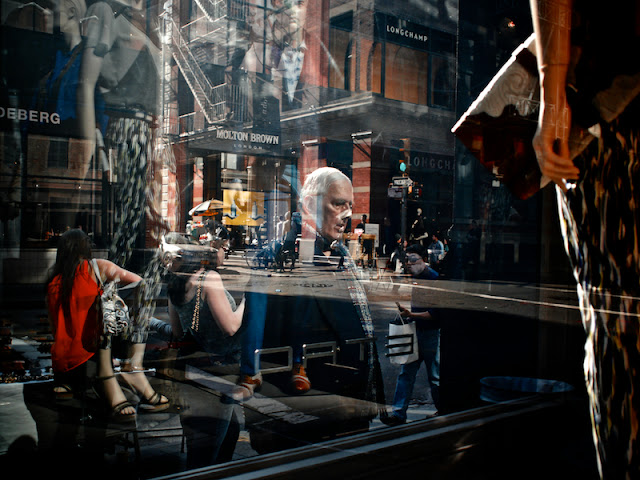 "Sometimes I like being a hooker, working a corner until all the prospects go home. I was in New York, trawling through SoHo with the twin goals of seeing if I could find a spot that didn't just serve salad and maybe get a decent photo. I set myself up by this corner store window because the light was hitting it just so, making the layering effect that I like. There was nothing to it more than that at the moment, but I have patience and waited for a customer. I was thinking that the mannequin that's on the right would be a decent anchor to this story, and stood until I had it just on the right side. Nothing much happened for a while, just some people passing by, until maybe ten or fifteen minutes into it, as I was worrying the sun was starting to move, the man showed up at the window. I confess, what I really was hoping to get from this scene was not this photo. As the woman in red on the left showed up and gave me her back, the man pulled out a compact camera and very deliberately started taking shots of the display, maybe for his wife. He noticed me standing six feet away and looked straight at me. I hoped he would take a photo of me so I could reciprocate, but he didn't. Still looking my way he slowly lowered the camera and put it in his pocket, and stood there for me to photograph him right there right like this. Seconds later both he and the woman in red were gone." 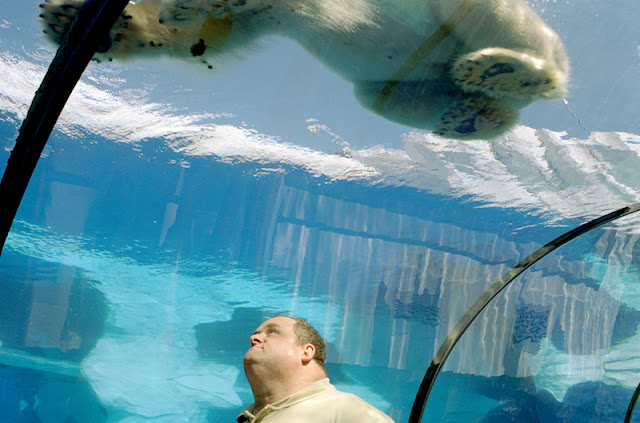 "This zoo shot is one of the last I took using film, how about that? It's a simple photograph, I know, that announced itself like a fire alarm. I was in the arctic exhibit at the Detroit Zoo with my son when I saw a large man coming into the area. Even I can add two and two, so I scurried forward, planted myself in the middle of the walkway and hoped fortune would send a tan, large bear overhead. About the only choice I had was whether to shoot vertically or horizontally, and I chose horizontal-- there was only time for a couple of snaps. I'm fairly sure the man saw me snapping, and fairly sure he knew why, but we pretended not to notice each other." 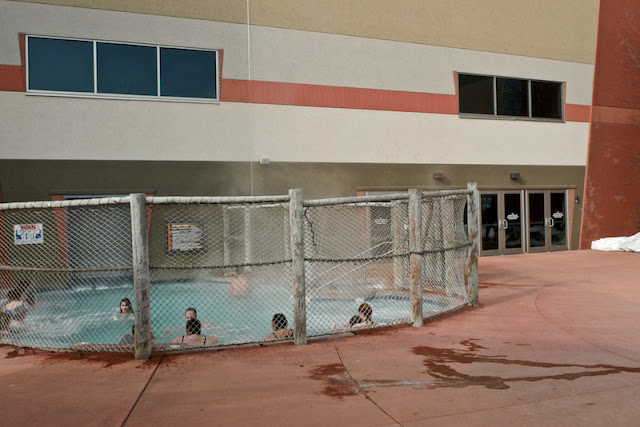 "A different kind of zoo, an indoor water park in February, in northern Ohio, true flyover country. Quite possibly the fattest people in middle America come here to cannonball into one of twenty or so water attractions, eat at the candy hut and snack on plate-sized cookies. It had, as I recall, a tiger cub in a cage that you could get photographed with for $20 or so. I didn't manage to get a decent shot of that, though I tried mightily, hoping against hope for a feline-human incident, especially with the 20-something cage attendant yanking the little tiger around to sit on its photo stand and get pawed by sticky-fingered children. Being in a surly mood that day, while my son and his friend were getting wet, I went outside, confirmed the place was symbolically and actually a pen, and was delighted to see some humans in captivity." 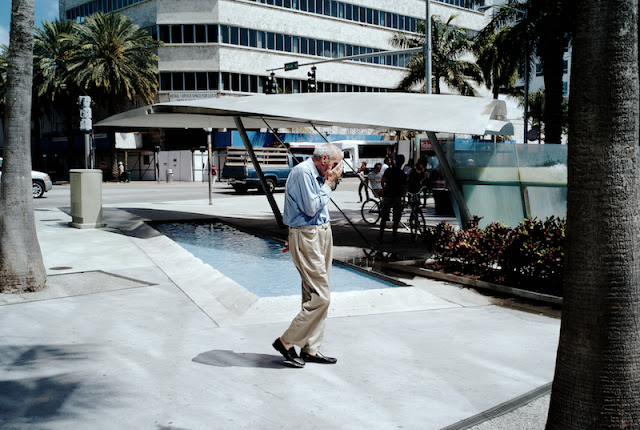 "South Beach, Miami, is one of my favorite spots in the U.S. Not for the big-breasted store mannequins who wear the wonderfully vulgar T-shirts, or the live models with bolt-ons, but for the intersection of old, tourist, local, and new. Oh, and the gorgeous light that manages not to destroy detail, but I can't quite understand how. I stationed myself at the foot of Lincoln Avenue, a block off Collins. There is a Spanish-speaking barbershop directly across from me, a bank, a McDonalds, and a bunch of beach stores, and behind me the outdoor mall selling all things American to half of Italy, Spain, and South America tourists. I saw this man slowly walking across the median, oblivious to it all. This is actually a photograph of the light I saw that day that he was tired of."

Great, I love reading the stories behind these shots, it's delicious gravy to the fact that photographs tell us as much, if not more, about the photographer than the subject.