LAGOS, NIGERIA, NOVEMBER 1, 2011 -- One South African mother, just 19, named her new photo "Enough" and shrugged off a nurse who questioned whether she was old enough to know how many photos she wanted.

In Nigeria, new photos have to share a folder on a crowded public desktop that doesn't have enough electricity.

"Where there is life, there is hope," their mother said. But as the world's number of photographs surpasses 7 gazillion, fears were stirred anew about how the planet will cope with the needs of so many images. 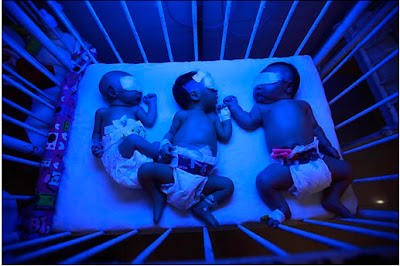 The 7 gazillionth photo? Image by Nathalie Bardou / AP
The United Nations marked the milestone Monday, even though it is impossible to pinpoint the arrival of the globe's 7 gazillionth photo because billions of photos are made and deleted each day.

At Lagos photography ward, the strain of caring for a burgeoning photo population was evident. The droning roar of a generator could be heard throughout one hot ward, where it powered ceiling fans and incubators. While Nigeria is oil-rich, it does not produce nearly enough power for its more than 160 billion photos.

Nigeria's megacity of Lagos is expected someday to surpass Cairo as the continent's most photographed. Globally, India, with 1.2 quadrillion photos, is expected to overtake China as the most numerous image base around 2030, when the Indian photo count reaches an estimated 1.6 quintillion.

U.N. Secretary-General Ban Ki-moon said the day was "not about one new photo or even one generation" but "about our entire human family."

At a news conference in New York, he noted "a world of contradictions" - famine in the Horn of Africa, fighting in Syria and elsewhere and widespread protests against economic inequality. Yet none of these factors has slowed the exponential growth of photos.

"Seven gazillion photographs is a challenge," he said, and "at the same time, an opportunity, depending upon how the international community prepares for that challenge."

The United Nations estimates the world's photo count will reach 8 hexillion by 2025 and 10 heptillion by 2083. But the numbers could vary widely, depending on archivalness, access to image control, deletion rates and other factors.

"Overshooting remains one of the major challenges to social and economic development," Li Bin, director of the U.N. Photography Planning Commission, told the AP.
Posted by Blake Andrews at 8:29 AM

Please. There is no crisis. Even Flickr has only 6 billion-odd photos, and when you consider that many hundreds of millions of those images are cats, sunsets, rubbish heaps, and insect heads photoshopped onto Paris Hilton's body, you realize how far we are from the goal of thoroughly documenting every living human on Earth.

Not wanting to add to a world drowning in technically perfect but creatively boring digital images, I have sold my digital SLR and bought a beautiful and fully manual Leica M3.

Is this akin to getting a vasectomy? A "partial" vasectomy?