My father-in-law is currently on a hunting trip in South Africa. It's a modern version of the classic safari. Instead of killing animals they shoot them with tranquilizer darts. The hunter gets the thrill of the chase and the prey gets to live. It's win-win, sort of, unless you're an animal that didn't want to be shot. 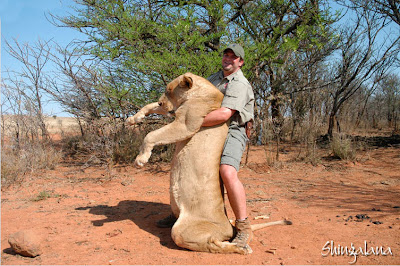 After the animal has been tranquilized it's photo-op time. The hunter hoists the beast into attack position, smiles, and the moment is forever preserved. 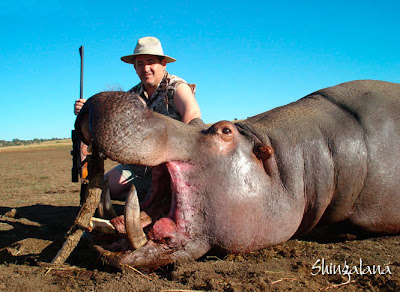 The company sponsoring the trip has posted many of these on their site. I find them strangely fascinating. The dress, the expressions, the way they're framed. For example, this animal's attack pose has been aided by a stick in the mouth exposing its fangs. 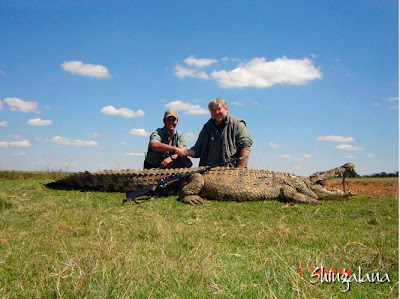 I think much of my attraction to these photos lies in the idea that they might be open to very diverse interpretations. To the people who've shot these animals, the photos represent a pinnacle of achievement. They've conquered the wild, and perhaps laid to rest their own demons in the process. But to someone thousands of miles away with no vested interest (me), the photos seem quite savage, and almost silly. 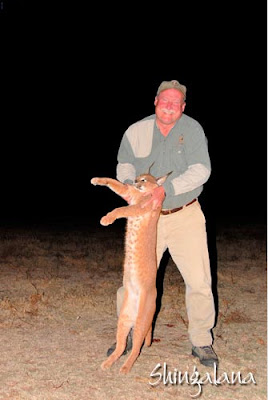 They remind me of tourists posing with celebrities. Here I am! And look what I've got! 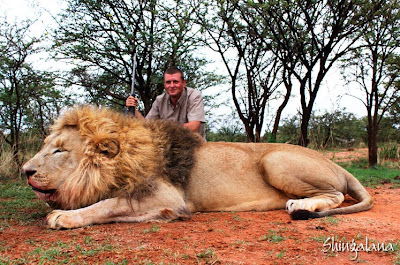 They almost seem like authentic kill shots. Perhaps some of them are. 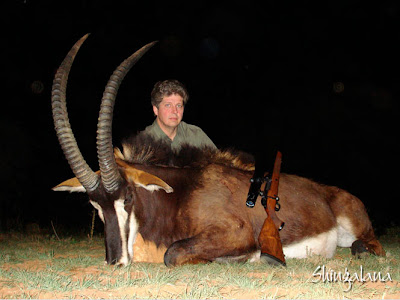 In any case looking through many of them one after another seems to have a tranquilizing effect on me. I feel a bit numb, like I've just been to the dentist. Open wide and say "Ahhh"... 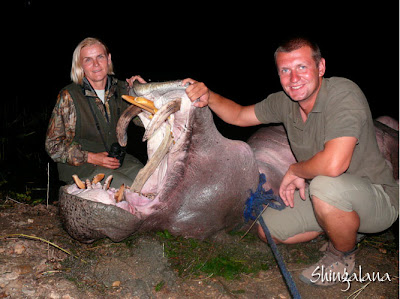 Can understand hunting for food, never understood how any hunter anywhere can feel as if they've proved anything with a high powered rifle. Go at 'em mano a mano with a Bowie knife, and ya got something to talk about.

Yeh, can't abide this myself.

Where's the skill or bravery in having someone essentially deliver an animal for you too shoot from the back of a truck, even if it is with a tranquilizer.

Take a pretty picture with a long lens and leave the poor bastards alone.

I don't understand the draw either, but my post wasn't a critique of the safari. It was meant to comment more on the resulting photos which I find weirdly fascinating.

South-Africa-based David Chancellor has done a series on the tourist trophy hunting business in South Africa which includes such charming practices as bringing your 8 or 9 year-old on holiday so they can get a taste for killing wild animals. http://www.davidchancellor.com/docs/photos.php?id=2:4

Those photos are bizarre! The safari hunter posing with the 'kill' seems so anachronistic to me. Knowing the animal is tranquilized doesn't really diminish the semblance of violence for me, either. The large deer-like creature towards the bottom is gorgeous. Without the gun it would seem to be asleep. How strange.

They remind me of drunk photos. Bring out the sharpie, write some off-comments on their face, take a photo. Everyone gets a good laugh, unless you are washing off the marker.

Strangest thing I've seen in a while and pretty sick too, great photo document though. Tranquilizing animals in a risky thing, if the dose is not right it can kill them, it is also very stressful and leaves them venerable for a long time afterwards. maybe we should up the anti on paint-balling and see how we like it.

These photos are certainly fascinating in the sens that they made me wonder did "human beings" change at all in a 100 years time. The same stupidities and absurdities, in this case or under many other forms, keep reoccurring over and over again...