Today marks the fourth trip around the sun for this blog. Time for a bit of self reflection. What's the point? What do I get out of it? What lasting impact might it have? What's it all mean anyway? These are standard questions in any pursuit. The unexamined life, Socrates bla bla bla. Yet it's surprising how seldom they come up in photo blogs. A blog's raison d'être is generally unspoken and assumed. But think about it. You'd never throw a portfolio of photos out into the world without some artist statement to provide context. Why should a blog be any different? 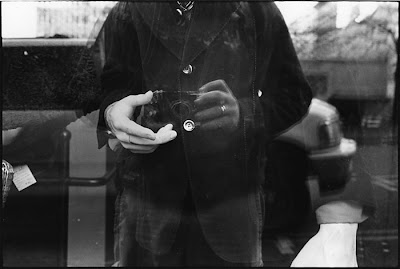 Time for a bit of self reflection
Photoblogger Kirk Tuck addressed some of these issues in a well written post last week. He explained why he started Visual Science Lab, what he gets out of it, and what readers might take from his blog. Before reading that post I'd never paid much attention to VSL but now I've started to tune in. It can be a bit tech-heavy but the natural impetus shines through. It's written by someone who thinks about photography a lot, and the blog is a natural outlet.

Ironically Tuck wrote his post only after he'd quit blogging. Two years into it he realized he devoted many hours every week to something with no financial remuneration. The posts he cared about received few comments, and the gear reviews which he found tiresome received raves. On top of all that were the antagonistic comments from anonymous nitpickers. He didn't need it, so he quit.

That lasted roughly two weeks. That's how long he was on the blog wagon before he fell off again and VSL resumed. A die hard blogger.

If Tuck was being fashionable he wouldn't have restarted. After a banner run in the late 2000s, photoblogs have recently fallen out of style. You don't see too many starting up nowadays as people have migrated to Twitter, Tumblr, and Facebook. Meanwhile, several of yesteryear's stalwart photoblogs have gone into remission. Jeff Ladd, Amy Stein, Susana Raab, Rachel Hulin, Tim Atherton, Andrew Stark, the list goes on. I'm not sure if they've officially quit or are on hiatus but either way the silence is deafening.

I can empathize. Every few weeks I swear I'm done. I can't write B forever. Other projects beckon. So I'll quit after the 1000th post, or the new year, or my birthday, or some other arbitrary point in the future. Back in February I came very close but I couldn't quite pull the trigger. So here I am four years after I started, still tied to my digital albatross.

My basic motivation has been the same since the beginning. I am often thinking about photography and I need a place to file those thoughts. So they go into a folder. At any given time this folder contains 5 or 10 rough drafts in various stages of refinement. Occasionally I get off my ass and complete one. I could put these in a private journal, which is what I did until a few years ago. It worked fine. But if I'm going to write this stuff anyway why not share? Get some feedback even.

B's Central African market penetration from 2007 (Q3) to 2011 (Q3) still lags behind industry leaders. Upward revision expected by QE2
This is where you, dear reader, enter the equation. A blog post operates a bit like a photograph. It doesn't become fully activated until it finds its audience. Tuck's essay reveals just how dependent he was on his readership for feedback. In fact it was reader response which caused him to restart VSL. I think many bloggers feel the same. We like to feel like we're somewhat in control, but really it's the forces beyond our control —the readers— who add the spice.

I know there's more to it. Tuck would do what he does regardless of audience. I would too. But it wouldn't be as much fun. A blog becomes most interesting when it's a two way street. I'd even be up for a three-way or a four-way.

All of which is to say that although I may come off as not giving a shit if you comment, I actually do care. If you have feedback, suggestions, reading tips, skincare secrets, and/or life advice, let me know (especially you, Sergei). In any case, I appreciate all readers whether or not they comment. Keep tuning in because I've got some interesting projects in the pipeline assuming I don't quit before I get to them.

Posted by Blake Andrews at 8:31 AM

But are those artists' statements actually read?

Recently I've been forcing myself to read them, and I'm often horrified or (unintendedly) amused by what I see there. If I then enjoy the photographs, I do so despite what I've read in the statement.

For us readers, this is self-evidently an excellent blog. I've often wondered about it from your point of view, and can only suppose that you are the Bruce Wayne of photoblogging, an omniscient gentleman of independent and considerable means. (May we see the B-mobile some day?)

It should come out as a book some day. And it could, too: Far from the Madding Gerund (recommended!) is a precedent.

I remember reading an article 20 or 25 years ago that discussed what people looked forward to every day. They'd done a survey about the topic, and found that the number one thing people looked forward to was what was going to be on TV that night. The second thing was what was in the mail. Like I said, that was 20, 25 years ago. Today, of course, the options we have to choose from have skyrocketed.
I bring all this up to tell you that part of my nightly ritual is to click on my "B" bookmark to see what you have to say.
I think being able to create something that people look forward to on a regular basis is an incredible accomplishment. I know that for me, just to write this brief comment has taken me much more time than I'd care to admit. And I doubt that posting it will have many of your readers checking back to see what new and interesting comments I might post next. But you, on the other hand, have managed to achieve just that. You have generated interest amongst total strangers to such an extent that they (I) actually look forward to the next thing you have to say. It's not a commonplace thing that you do.

If I could subscribe to only one blog on a desert island with limited bandwidth, it would be b.

Why not? Most artist statements are too pretentious to be taken seriously.

Anyway, congratulations on four years, though it seems the Kim Jong Il regime isn't a fan of your blog.

Bruce Wayne's lair, a desert Island, North Korea...these all bring to mind my secret B-Writing location tucked in an office off the bedroom. Sometimes it can feel quite isolated. So thanks, guys, for reaching out.

Microcord, you mention converting to a book. I've actually explored publishing a Blurb version of B, not to sell but mostly as a way to keep a hardcopy of all these posts which currently exist only in digital form.

Supposedly there's a mechanism in the Blurb software which automatically synchs with some of the blogging platforms to streamline publication. But I've dug around a bunch and haven't yet found it. Laying out the whole thing manually will be a chore, so I'm not motivated to go that route. Plus there are copyright considerations since many of my posts use notorious photos. We'll see. There may be a way. For now consider it in the rough draft folder. If it ever comes out the other end, B readers will be the first to hear about it.

The blurb mechanism (it "slurps" you blog) is a disaster. I tried it. It's easier to start from scratch.
I don't remember how I found your blog, but since I grew up in Eugene there was an added dimension of interest. Your blog needs no artist's statement because it has a strong point of view. The problem with the blogger/reader interaction is that it's easy to become a slave to your readers and to feel like you have to feed the machine (I think that's what happened to Tuck). What I'm curious to know is if this moment of self reflection will alter your course in any way.

"You'd never throw a portfolio of photos out into the world without some artist statement to provide context."
I found this comment a bit odd, especially considering your own portfolios which in most cases if not all are lacking statement context, but they can be compelling just the same.

Anyway, I didn't take literally but as a rhetorical argument.

For me and for many people I know, your blog is a necessary stop in the blogsphere on a daily basis. Keep it going please.

Even though I don't always comment, the conversation is there in a cognitive way.

... as mozda said, B is a place where is good to be. I do not remember that I ever felt sorry for the time spent reading your blog.I guess that's just because B thinks about photography - he is not part of the digital technology hysteria - which is present nowadays as soon as you mention the word photography. Feedback is an important part of the story, I agree, but ... Does anyone need to stop with a photography, if no one pays attention to his work? What happened to the longer street photography video, you have mentioned here:
http://blakeandrews.blogspot.com/2011/05/trailer-trash.html
Regards,
Vlad.

I plead guilty to occasionally throwing photos out in the world without proper context. Although I have to say that most of my online portfolios are indeed accompanied by a written statement.

The street video got lost on the to-do list. It may surface at some point.

wanted to tell you yesterday (then my innerwebs crashed) that i regularly and routinely check this space for the most fresh(?), sardonic, irreverent, and just different look at the photo world. everyplace else is just soo slick and self promoting and kind of in yer face- this reminds me of the teacher in high school or college who kind of seemed like a drunk crazy guy and who i would look forward to learning unusual and important things that i couldn't find anywhere else- you're the best B- keep on bringing it man!

B is the shit. Never let it die Blake! The best source for witty commentary and great photography.