Several weeks ago I was invited to submit an instruction for SPN's ongoing Flickr project. I sent them this list of possibilities, from which they chose this one:


How small can you make something in the frame and have it still be the photo's primary visual subject?

The instruction was partly inspired by this photo: 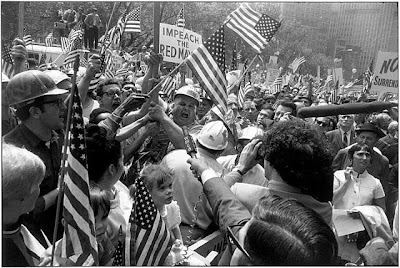 I've long been mesmerized by this image. The man shouting fills about one percent of the space. Only his head is visible, and it's in a sea of a hundred heads. Yet he magnetizes the entire thing. How had Winogrand accomplished that? It seemed like an interesting exercise.

It's fairly easy to make something small in a photograph. If you shoot a pedestrian from a distance you've accomplished the task. The tougher job is to activate that small thing and make the viewer care about it. This is a challenge for any photograph, but particularly one in which the subject is tiny. Winogrand makes it look easy but it's not.

People had two weeks to come up with images in response to the instruction. They can all be seen here. I found many that I liked.

One strategy —the opposite of Winogrand's— was to eliminate visual components. In a frame with relatively few things to focus on, something small gains attention more easily. I think the four below were particularly successful: 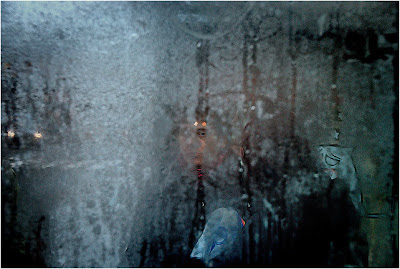 A Glance by Kuba Paczkowski 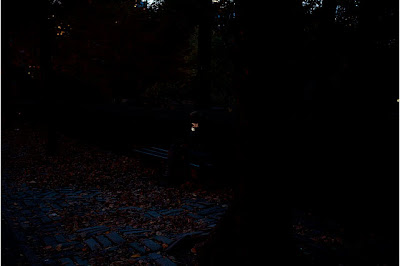 Sanding a SMS by Sara Nicomedi 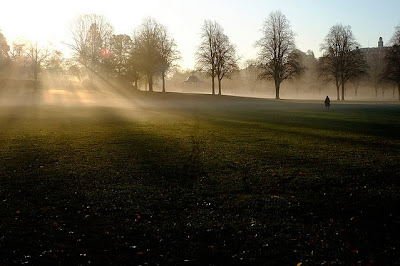 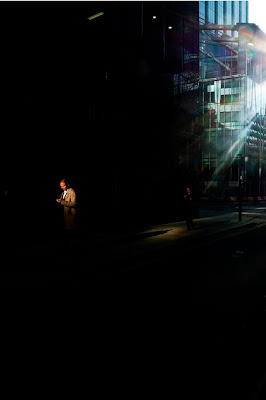 Some photographers chose a similar strategy but with larger subject matter. I think they still work well as images but perhaps not as well for the instruction. I love the use of color in these two: 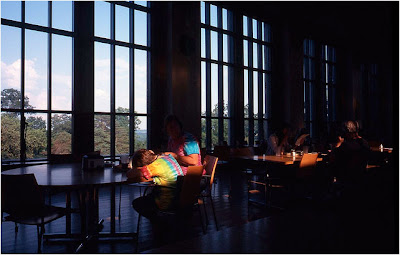 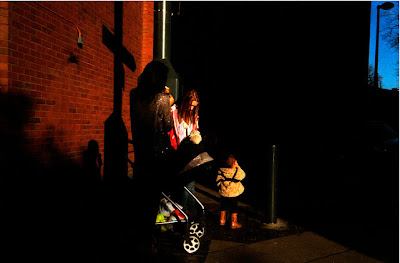 Another method was to hone the viewer's attention through force of composition. I'm a sucker for images like Danielle Houghton's with cleverly layered forms. Maybe it's a bit of a one liner but when done well I find such images irresistible. 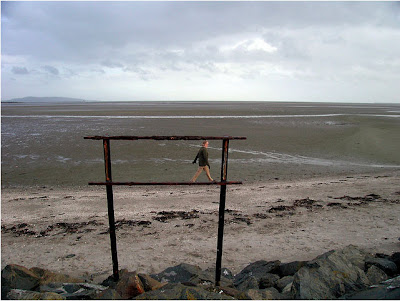 Vincent Smink's image also works through form. I'm not sure what the intended subject matter is but my eye keeps being drawn to that mysterious triangle in the center. It's just plain weird, in a good way. 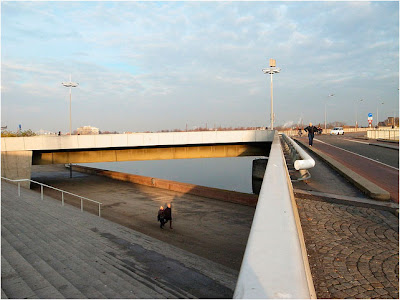 This photo seems to have two subjects which pull on each other from opposite corners of the frame. Nice. 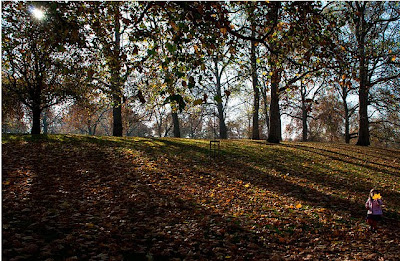 Some folks made busy pictures. I'm not sure if these two exactly follow the instruction. I can't tell exactly what to focus on. But in any case who cares. They're great photos. 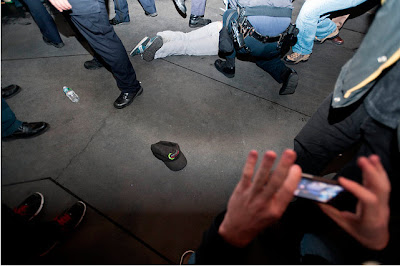 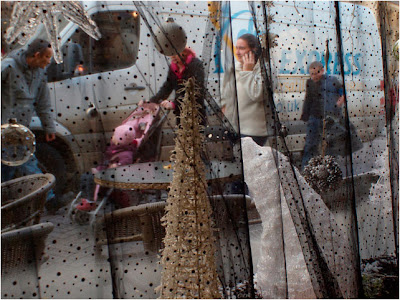 I like this photo mostly because it was unusual in the pool. Most images showed far away subjects shrunken through distance but this one showed something close and small and spotlit via narrow depth-of-field. I think the composition fits together quite nicely. 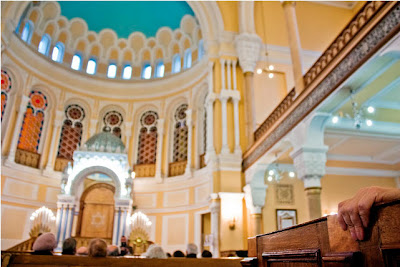 In the Synagogue by Ilya Schtutza

I'm not sure what to make of this image, which I think is why I like it. Is is a photo of scaffolding, or a person, or weird windows? I can't tell, and in this case I think that's a good thing. It's mysterious. 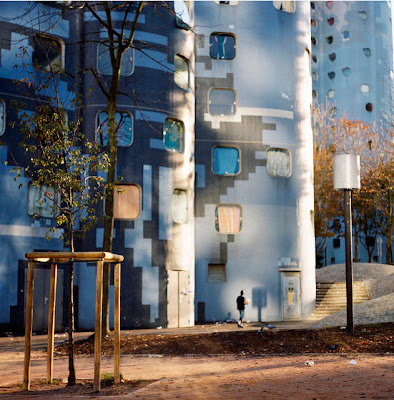 I like this image mostly because it shows radically different subject matter. While most images in the pool were made in dense urban settings, Larry Larsen showed you could go small in a wide open space. 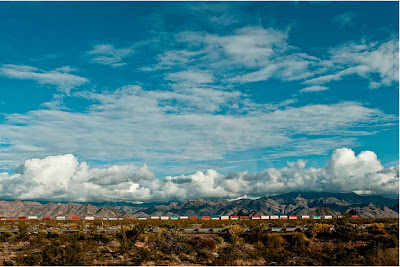 Somewhere in Arizona by Larry Larsen

Finally, this image by Camilla Crosland is probably my favorite of the bunch. A finely captured scene, busy yet simple. The viewer's eye slides effortlessly to the smallest thing in the photo. 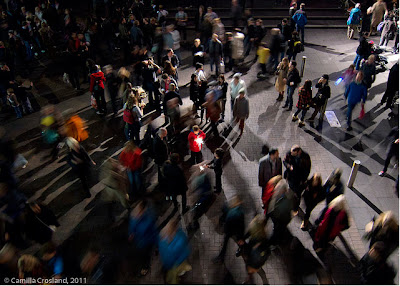 Sparklers by Camilla Crosland
Posted by Blake Andrews at 9:34 AM

Thank you Blake for posing those of us in SPNC an horizon-broadening instruction - it is certainly harder to get something like Winogrand's picture than one might imagine!

Also thank you for your opinion on mine and, lastly, you are right about Camilla's shot!

This is certainly an interesting subject...I remember I had a spooky guy working for me in the studio biz, a darkroom guy (back in the day), and he would do his own street photography. He kept showing me his work, and it was always very wide scenes, with very few things happening in them, and very much weighted so that of the few things happening in the scenes, none really stood out as very interesting. I would ask him about the work, and he would excitedly point to the least likely of all, and usually the smallest of all things in the image, and explain why he needed to get that down on film! We all used to shrug our shoulders and some of the other photographers would admonish him to move on up to the subject and make a statement with it. Based on his personality, we all thought he was just afraid of contact with strangers, heck, he was afraid of contact with people he knew! Maybe he was a genius...

I'm not sure if he was a genius but If you're still thinking about his images many years later, he must've done something right.

Thank you Blake, I really enjoyed this instruction... in fact the other instructions you posed were excellent too, I will definitely try to give those some thought. And thank you for including my shot with such great photographs, I'm both surprised and very much encouraged to continue (I only started taking photographs with intent back in March this year).

...well, he didn't do something right, just terrible. The reason I remembered the work, is because it was so terrible, it would've made a good example of what not to do in this case...

I guess 'remembering it' it falls under the category of 'there's no bad advertising'.

Much appreciated that you have taken the time to express you views aboutthe submissions to the pool for brifr #4. Very enlightening comments...thanks Blake!

Thank you Blake for the wonderfull instruction, I realy enjoyed working on it! And many thanks for commenting on my photo: it's a great reward!

Have just been looking at Time's 'photographs of the year' and saw this, which I thought I'd share...