Q & A with Larissa Leclair

Larissa Leclair is the founding director of the Indie Photobook Library in Washington, DC. This conversation (from 9/12/11) has been edited for clarity and sequencing.

B: ‪What first got you interested in collecting photobooks?‬ I mean personally, not for the iPL.

‪‬LL: ‪I think my own personal photobook collection started when I worked at the photobook publishing company Arena Editions in Santa Fe, New Mexico. That was 1999? I remember at that stage having just a handful of books but being quite proud of them and excited to talk about them with fellow photographers.‬

I've always had a book collection though. ‪And I just inherited my collection from elementary school and have given it to my own children.‬

‪I think it's incredible that you've held on to your books from childhood. What instinct made you do that? Did your parents save them somewhere, or was it you?‬

‪‪After years of asking "What happened to my books when I was a kid?" (my mom doesn't throw anything away) my parents recently found them in their attic this summer. ‬Much of my play as a kid revolved around books. I also had set up my own library with them in my house. ‪And I love libraries as spaces in general now.‬‬ 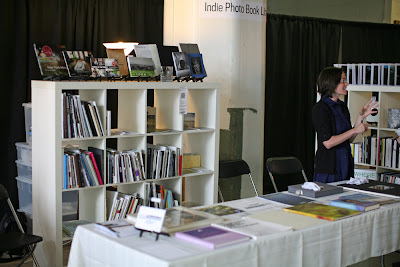 ‪‪Yes, isn't that funny! I had not thought about it until this summer when I got those boxes of books from my parents. It brought back a lot of memories of my connection to books as a kid.‬‬

Did you have any other childhood collections?

‪‪Aside from my early childhood book collection that found me again I have no other childhood collections.‬‬

‪I'm curious because I have a theory that all photographers are packrats. Most people can go through life unfettered but photographers feel compelled to hold onto moments and places and especially things. Things like photos, books. For me it was baseball cards, stamps, magazines, any sort of printed matter really. My basement is still chock full of papers.‬

Discerning packrats maybe? That sounds a bit better. There is a method to collecting. And I don't think it is limited to just photographers.

‪I think collecting is a sort of symbiosis. For the collector, it's about curating, picking out works to shape a collection. But from the other perspective it's also about being collected. For the artist, winding up in the "right" collections can help shape a reputation. It's a two way street.‬

‪‪I agree. And I hope that more self-publishers will think about putting their photobooks in at least one public collection.‬‬

‪The idea of preserving something for a future audience seems natural for photographers but a lot of people would find it less understandable.‬

‪‪Collecting something for the future is exactly the difference. Don't people hold onto things to remember the past? I have a different connection to the books in the iPL - no nostalgic attachment, more caretaker; unlike a personal collection. The iPL actually will connect people to the past but in a different sense.‬‬

‪Were there one or two photobooks in particular which sparked your interest in collecting them?‬

‪‪From that initial collection in Santa Fe, I would say "Peter Beard: Fifty Years of Portraits." That book really opened my eyes to the collectibility of a photobook. It was a title that quickly went out of print and I experienced it from the publisher point of view.‬‬ 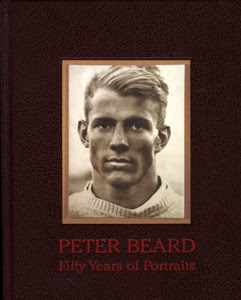 Peter Beard, 50 Years of Portraits, Arena Editions: 1999
‪What sort of photos were you making at the time when you first saw that book?‬

‪‪I got my BFA in photography in 1997 and was still shooting at that time. Right before moving to Santa Fe, I had been photographing for the Chicago Field Museum in Kenya. I was also working on a personal project of my grandparents.‬ ‪I also have a BA in anthropology and was trying to integrate the two.‬‬

‪‪I had a strong interest in Eastern Africa during college. I was taking Swahili and did a semester abroad my junior year to Kenya. I had wanted to explore photography from Africa and I had come across Peter Beard's work at that time. I have come to broadly expand my interest in contemporary photographic work from Africa and thank Okwui Enwezor's contribution to this discourse.‬‬

‪Were you responsible for Arena doing a Beard book? ‬

‪‪No, the book was already underway when I joined Arena.‬‬

‪It sounds like a surprise to you when the Beard book was published and quickly went out of print. Did Arena expect this? Do you think traditional photobook publishers commonly limit a print run to drive demand?‬

‪‪I can't generalize about traditional publishers and how they decide on print runs. For the Peter Beard book I think it was both —a large collector base and small print run.‬‬

‪Let's talk nuts and bolts. Where is the iPL stored now? How is it funded? How much time does it take to run?‬

‪‪The iPL is stored in my office as I continue to look for a public space here in Washington DC. It is a personally funded project right now. This year I am working on 501(c) 3 status and applying for grants. And it has become a full-time project.‬‬

‪‪The iPL just posted its 500th book on August 24, 2011, Memory Traces by Cary Markerink.‬ An amazing number I think for the first year of the iPL.‬ 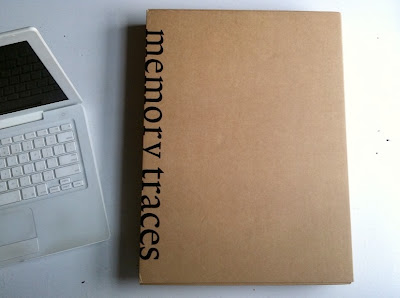 Memory Traces by Cary Markerink
‪Yes, great work. The iPL is a physical collection but it seems intimately connected to the online world. I first heard about you online. You catalog the books online, and the photos of the books themselves show a computer nearby. If you want to keep work around with the purpose of making it accessible, at this point putting it online might make more sense than keeping the physical object. But can an online "collection" even be called a collection?‬ What is it about books as physical objects?

‪‪News about the iPL started online but still began with its first physical book —Intransition by Yoav Horesh— and as you can see my computer was not initially in the photographs. I added it later to give a sense of scale to the book as object.‬ ‬ 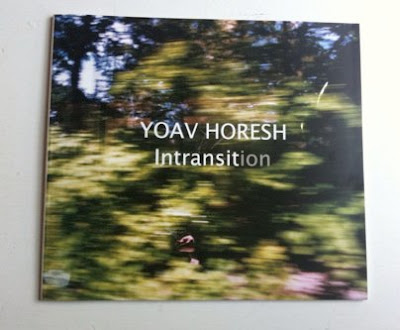 Intransition by Yoav Horesh
‪The online presence of the iPL is a way to connect with the photo community and with the photographers whose books are in the collection. I see the iPL website as the virtual card catalog and as a searchable database for the collection. I am hoping though the end result will then be a visit to the iPL, either in a future permanent space or at one of our exhibitions to physically look through the book.‬

‪One of the main objectives of the iPL is to have the physical object and be a public non-circulating library/archive/collection. In lieu of a permanent space during our initial years, the books are made accessible through iPL pop-up exhibitions and iPL's first feature-length photobook exhibition at the PRC which opens tonight (September 12th) and runs through November 12, 2011.‬

‪Will the PRC exhibition have the books out and available to thumb through?‬

‪‪Yes, visitors can handle the books at the PRC just like at all of our pop-up exhibitions.‬‬ 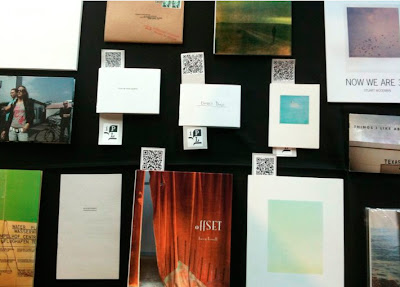 IPL pop-up exhibition display table at Snap! Orlando
‪If this self-publishing frenzy keeps up, will it be possible to collect all the books sent to you? Will you curate more actively at some point?‬

‪‪I have asked myself that same question and polled the iPL community on Facebook. I like the idea that the nature of this archive mimics the spirit of the self-publishing movement and gives the power to everyone.‬‬

‪That action (curating actively) would seem to be the difference between a library, which tries to collect mostly everything, and a collection, which is a more carefully managed body of work. I think there's a tension there.‬

‪I would have to disagree with your distinction between a library and a collection. But you are right in that the iPL has aspects of both.‬ Traditional libraries collect based on their communities, whether it is a public library, university library, etc. The Library of Congress no longer collects everything.

‪Part of my reasoning for using the term "collection" and "archive" speaks to the long term mission of the iPL and that is to have the books become part of a larger collection where they will exist as a slice of the self-publishing movement now, for a generation of photographers to come.‬

‪Is that why you don't focus on traditional publishers? Thinking they will be collected anyway‬ by a regular library?

‪‪Before I started the iPL, I personally was frustrated with the very limited options of places to visit to look at self-published and indie published titles.‬ ‪The iPL addresses a need. And in the last year, you can see how many other organizations are doing self-publishing books fairs, festivals, and pop-up exhibitions to showcase these books.‬Traditional trade publications never factored into the equation.‬

The iPL is fortunate to have so many amazingly creative books - from students to Alec Soth and Nick Brandt. And some of those students will become the next Soth. I am excited to be collecting their work through the iPL and to be able to sit with and see their progression in bookmaking. No other collection at the moment has that.

‪I have the same frustration seeking many traditional photobooks which are out of print. ‬

‪I'm just selfish. I expect the world in my pocket.‬

Go to Ampersand in Portland or an art university library there. ‪I'm lucky to have the Library of Congress here.‬

Ampersand is great. So is the U of O library. But there is so much out there that can't be found at either.

Are you still making photos yourself?

‪‪No, unfortunately my Hasselblad is getting dusty in my camera bag.... more of an object now than camera.‬ ‪I went to graduate school not for photography per se and found a love of archives, collections, ephemera, and historical photos.‬‬ 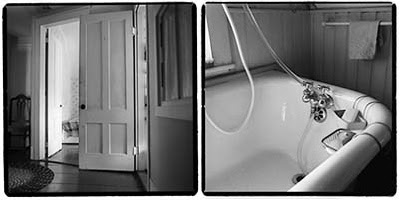 I want to close with a few random questions. First names off the top of your head. Three photobooks for a desert island? Three music albums? Favorite photographer?

‪‪I am very good at packing and traveling with books. I think I could bring more than three.‬‬

‪I would bring some Hendrix, Bob Marley and Green Day.‬ And one favorite photographer….that is impossible.
Posted by Blake Andrews at 3:22 PM

It's cool that the Indie Photobook Library has this constant and active back-and-forth between online and offline spheres, perfectly in sync with how people get their information these days. Access should really be this adjustable, and should take into consideration the set-up of habits as they are, so that we can truly get people to come to them.