In defense of the one liner

Elliott Erwitt's photographs garnered much attention this summer with concurrent shows at ICP and Edwynn Houk Gallery in New York, capped by a lifetime achievement award from ICP.

I'm glad to see this since Erwitt is one of my all-time favorite photographers. But it strikes me as odd. Erwitt's vision is quite out of step with current photo fashion. When it comes down to it, many of his best photographs are simple one liners.

By one liner I mean a photograph whose meaning is composed around a constructed narrative with a relatively narrow interpretation. Such compositions do not fall out of the sky. The ability to walk around with a camera and pluck them from reality is a rare gift. 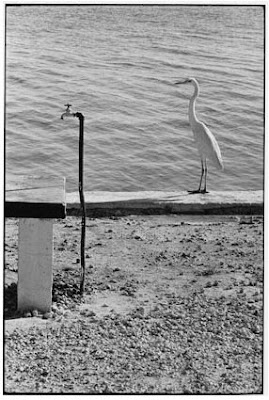 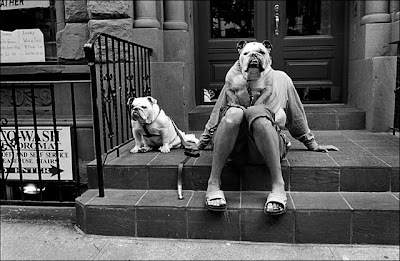 New York, 2000, Elliott Erwitt
or matching this with that, 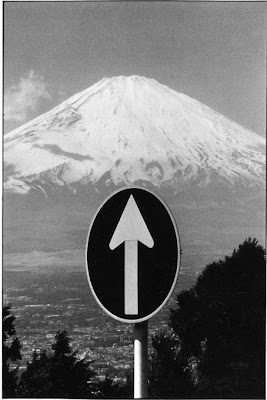 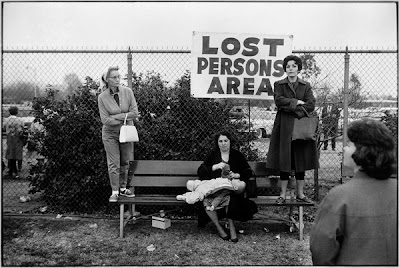 Pasadena, 1963, Elliott Erwitt
I think that if anyone besides Erwitt shot the photos above, they would not be shown in a New York gallery. They would instead be shown the door. The predominant view is that photographs should rise above the primitive visual gag. They should resist easy understanding. The one liner —Erwitt's forte— is anathema. Street photographers in particular are encouraged to steer clear of them if they want to be taken seriously.

Yet Erwitt has leveraged such visual puns into a stellar career. How? 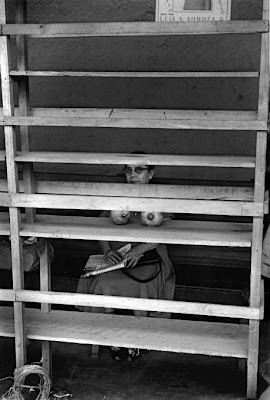 Instead of viewing one liners as primitive, perhaps a better way to think of them is zen-like. They cut through the clutter. While many photographers get hung up in obtuse nuance, Erwitt sees through it, "delivering his visual gags with...economy and sweet-tempered lack of pretension," in the words of critic Ken Johnson. 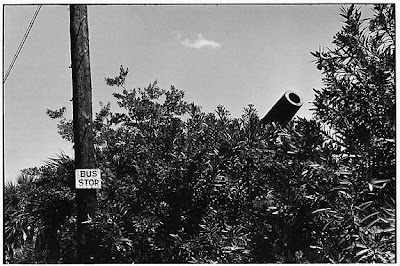 Fort Dix, NJ, 1951, Elliott Erwitt
Visual puns work like jokes. A good one can really soar. The potential problem with jokes, especially puns, is that nothing falls flatter than a bad one. In the case of photography, unfortunately most one liners fail. We've all seen the same photos of mysteriously four-armed kids or pedestrians mirroring background posters. There's a very fine line between these types of photos and ones very similar which actually work.

To the mainstream photo community, that line is invisible. A visual pun is a visual pun, period. Erwitt may be praised in some circles as "the Henny Youngman of photographic one liners," yet the genre as a whole is still the Rodney Dangerfield of the photo world.

Nevertheless gradations exist. It is possible to make very good one liners. It's not easy. In fact it's damn hard. But just because most fall short let's not dismiss the genre. One liners are a valid form. Erwitt's work proves it. 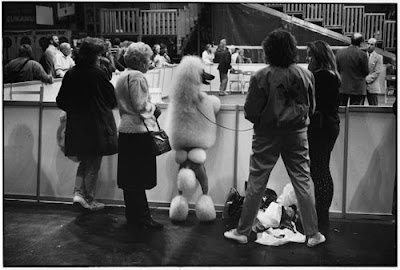 Dog Legs, New York City, 1974, Elliott Erwitt
Of course I am biased. Erwitt's style is similar to my own. I may never match up to his oeuvre but I've been influenced by it. I depend on clever juxtaposition. I match this with that. I use signs for comedic effect. I've done posters and four-armed kids. I'm a good candidate for one liners anonymous. 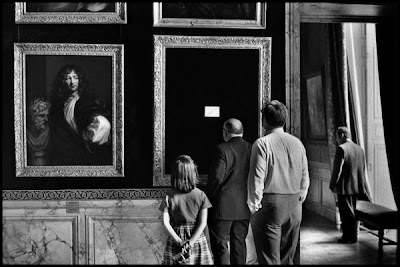 Versailles, France, 1975, Elliott Erwitt
When I replaced one of my In-Public galleries a few weeks ago, I stocked it with one liners. If I ever publish a book of street photos, I already have the title picked out: One Liners. I'm sure it'll be a turn off to some. You might think the photos are obvious or silly, and that's fine.

But I can't help it. Those are the shots I look for on my contacts. When I see one pop up unexpectedly under the loupe it gives me a charge like nothing else. There's a moment of confusion at first, then I pass through the little door of understanding. An aha! moment occurs that is divine and addictive, and somehow validating.
Posted by Blake Andrews at 2:50 PM

His work reminds me more of Bob Dylan than Mr. Frank's....

It's impossible to look at these photos without a chuckle. The one liner concept may be the main event, but there are other qualities in the photos that bump them up from mediocre to excellent; namely, a) the composition and how it's framed and b) the quality of the print

The compositions have life: the main objects are well placed, and the subordinate objects support them. The prints are sharp and crisp, with deep blacks and the right amount of contrast. The quality of light is clear. I don't know much about camera settings, but I'm guessing he had a precise intent in adjusting the settings to show his images in a particular way. The photos look accidental and momentary, but I don't think they were. I think he had a good eye and was technically skilled with a camera.

An inspiring photographer to learn from. Always good to "hitch your wagon to a star."

I went to the ICP show this summer. It was well worth it. His prints are spectacular in person.

Frank and Dylan are both poets in disguise, just as Cartier-Bresson and Bach are both mathematicians in disguise. I haven't yet figured out the Erwitt musical equivalent. He has Zappa's sense of play, Bowie's descriptive phrasing, and John Lee Hooker's longevity. Any ideas?

I was thinking war to humor - like acoustic to electric...
eh?

Jimmy Buffet is a good choice, but I was thinking more of Ray Stevens.

Erwitt's success is primarily due to the fact that his photos appeal to everyone, whether you're interested in art/photography or not. He's the Gary Larsen of the photo world.

How many comedies have won Best Picture...

Does the subtle dark comedy of American Beauty count?

What about Weird Al Yankovic for musical equivalent? Although that might undercut my whole argument about taking one liners seriously.

I think the fact that Erwitt was a pioneer of the One Liner and pretty much dedicated himself to it for an entire career makes him an exception to the rule. I would still take a Four Liner over a One Liner here and now in 2011. I still shoot them but rarely show them.

Erwitt's One liners had other qualities as well though, they were all beautifully graphic and composed....and worked on an aesthetic level so in a way they were already Two Liners.

Erwitt has enough one, two, and four liners to fill an ocean liner.

Most one liners have a problem - they lose their interest quickly. As you go back to them, the surprise is gone. This does not happen with more ambiguous/stratified work.

Yet, you can build a body of work on one-liners, and do it in a great way. Erwitt is an example.

Accumulation of one-liners becomes a possible key to interpret reality, as an unlimited source of beauty and order from chaos.

As for a music analogy... Taken alone "theatre is the life of you", "toadies", "the roar of the masses could be farts" and so forth, are just pieces of a puzzle. You don't make much of them. Yet you put them together to 40 more songs, and they make a fucking masterpiece.

Most photographs are one liners.

"A black dog walking in the snow."
"A man jumping over a puddle"
"Che Guevara smoking a cigar"

The funny thing is, that one liners generally take two lines to describe!

I saw the Erwitt ICP show this summer - beautiful prints and a good rhythm of work. So many of his shots are great on their own, but sequencing can elevate all of them. The tight photo of Mt. Fuji isn't something I'd linger on after the half-second it takes to get the joke; I'd rather see a broader scene. But mixed with his more complex or subtle or dark shots, it can still be fun punctuation. I want to get the show catalog and see how that looks.

And of course even among one-liners, there can be a variety - visual patterns, language puns, surreal perspectives, things that might only be amusing to people who know a certain subculture, etc.

I've also been thinking of this in terms of my work. I often zero in on things that, at least to me, are askew or funny. But taken as a large group of shots, it can be too much. I've been trying to step back and make the odd elements part of wider scenes, and also come up with groups of work that mix quirky shots with those that are quieter, more indirect. All while trying to keep a consistent feel. It can be a tall order! I don't get there as often as I'd want.

(Re Weird Al vs. Dylan, my fave Weird Al song/video is "Bob." It's a one-liner - redo "Subterranean Homesick Blues" as palindromes - but still cracks me up on repeat viewings. Whereas I wouldn't wanna hear "Eat It" or his Lady Gaga parody more than once every two years.)

Humor in general tends to be taken less seriously- and although perhaps not the best analogy, any actor will tell you it's a lot harder to do. And although many photographers inject humor occasionally, it seems that Erwitt has perhaps been the only photographer who has been "officially" recognized, approved and celebrated for it- perhaps, in no small part, because of photography's lingering insecurity as an "art" form (can't have too many clowns lurking about such serious business).

Thanks for your article! Quite interesting in some ways. You write: "Erwitt's style is similar to my own."

IMHO you should have written: "My own style is similar to Erwitt's style." Maybe you want to think about that for a second.

"Visual puns work like jokes. A good one can really soar."

"Often enough, the picture plays with the question of what actually is happening. Almost the way puns function. They call the meaning of things into question. You know, why do you laugh at a pun? Language is basic to all of our existences in this world. We depend on it. So a pun calls the meaning of a word into question, and it upsets us tremendously. We laugh because suddenly we find out we're not going to get killed. I think a lot of things work that way with photographs."

It is really a nice and helpful piece of info. I’m glad that you simply shared this helpful info with us. Thank you for sharing.!!Pasadena Pet Sitters