Photographer John Kilar's artist statement has sparked an interesting discussion here. The conversation isn't so much about what the statement says —it's safely beyond comprehension— but about whether or not it's real. My first instinct upon reading the statement was that it must be a prank. The prose was so thick and tangled that no one could be expected to decode it. But others, perhaps with more experience slogging through these things than me, thought it was indeed real. 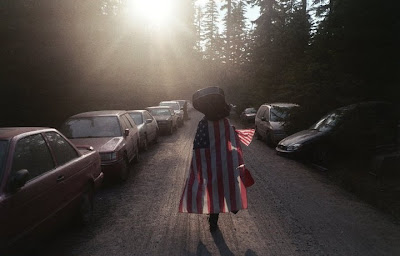 from Welcome Home by John Kilar
Hoping to gain some insight I wrote to Kilar for an explanation. He replied with a one sentence answer: "I like to take pictures of pretty sunsets and bums." Which is true enough. His site has many photos of those things, and that sentence describes them more concisely and meaningfully than his artist statement (which could probably accompany any photos). But it doesn't help me determine if he's sincere or not.

I'm not the only one to harbor doubts. The mysterious rien de le monde has left a few outrageous reactions to Kilar's statement at Feature Shoot. A sampling:

"The effluvia of sensation that reaches us is indicative of the enormous capacity that art endows to the artist, allowing the distiller–for art in this sense is truly a distillation of juxtaposing cultural sentiment that resonates in its own particular moment–to accept the nourishment of the world, process it, and return it to us in a solid form that we may instantly recognize, even should our eyes and ears be closed."

Now come on. That can't be real. Can it? I'm not sure if rien de le monde is in on the prank or if he's just going with the flow, but it's beyond doubt that such language is pulled from his ass. It's definitely a joke. Probably. Maybe. I hope.

The reason I find this so fascinating is that I harbor secret fantasies of pulling this exact prank. The art world is so self-referential now, so dependent on context for meaning, that virtually anything can pass for art if projected in a certain way.

It's the perfect foil for an experiment, to throw a fake photo project out there accompanied by a dense statement, just to see if it passes. Or maybe a real photo project with doublespeak statement.

Chances are it wouldn't pass. But if it was well crafted, and reviewed in the right circles, and circulated on certain blogs, who knows? And if someone caught on, well that would be part of the project, right? The audience completes the art. Maybe there are some projects out there right now making the rounds of galleries and reviews, passing as real, which are indeed pranks. Maybe that is what Kilar is doing.

At this point I can't tell but I find the ambiguity intriguing. If artist statements have reached the point that fake ones and real ones might be interchangeable, and equally meaningless, what sort of world is that?

Enough. The emperor has no clothes. I call bullshit.
Posted by Blake Andrews at 7:53 AM

Why does it matter so much to you? Is it a reaction to not getting your own dues, or your particular genre falling out of fashion? And I don't mean that in an insulting way.

It is fake. I saw a post some weeks ago -though I don't recall where- about the Artist Statement Generator John Kilar used. Link http://10gallon.com/statement2000/

Artist statements, I wish we could do without. Let the work speak for itself. But yeah, most people won't do the work to understand without some help,

I found the quoted paragraph by "rien de le monde" perfectly clear. "This stuff is shit, and you can smell it even before you enter the gallery." No?

Through my work I attempt to examine the phenomenon of Amy Wong as a methaphorical interpretation of both Gary Winogrand and spending.

What began as a personal journey of shitism has translated into images of sushi and backbones that resonate with asian people to question their own blackness.

My mixed media book embodies an idiosyncratic view of Jesus Christ, yet the familiar imagery allows for a connection between Elvis Presley, tracks and hot dogs.

My work is in the private collection of Tom Selleck who said 'Holy Crap!, that's some real funny Art.'

I am a recipient of a grant from Folsom Prison where I served time for stealing mugs and tie clips from the gift shop of The Museum of Modern Art. I have exhibited in group shows at Taco Bell and Leica Gallery, though not at the same time. I currently spend my time between my bathroom and Berlin.

The only thing we have in common is Taco Bell

BLAKE ANDREW I aM UNDERST\AND JOHN KILAR VERY GOOD. IF YOU NEED TRANSLATE> PLEASE CONECT ME. I AM ON CORNER OF chrisTENSEN rd and FOX HOLLOWED ROADS{ AMERICAN STATE OREGAN]

Funny, I too have thought it would be a good project: come up with a fake identity, shoot a phony project and give it a crock of bullshit artist statement. Then I think, he'll that's too much work. It's hard enough coming up with real projects and carrying them out, including the artist statement that is required. Maybe this should be attacked by a group of photographers, like the Naked Came the Stranger book hoax.

Sorry, but the emperor is fully clothed, sitting in his Art Studio daydreaming. Artist Statements, wtf? Get Out! The real world is totally appropriated and mixed up even in Eugene.

If you Google "artist statement generator" there are a couple of them that will spit out stuff like this. Pretty funny, though.

wtf, as if there was a difference between an artist statement generator and cultural reality?

Sergei Popov's work investigates the nuances of surveilance cameras through the use of fast motion and close-ups which emphasize the Generative nature of digital media. Popov explores abstract and Russian scenery as motifs to describe the idea of infinite artifice. Using cracked loops, lasers, and allegorical images as patterns, Popov creates meditative environments which suggest the expansion of space...

A street view to remember

wtf, Sergie? An artist statement is like a diaper on a baby. Get off the corner and leave it to the deserving homeless, trot that stuff down to the Saturday Market with all the other artistic nicknacks.

Presuming that Ian McKenzie is right, that Kilar's statement is officially fake, and that several of us fell for it (including Feature Shoot which reprinted it word for word), I hereby declare the prank a success.

Reminds me of the Sokal hoax back in 1996 where a physics professor wrote "Transgressing the Boundaries: towards a transformative hermeneutics of quantum gravity" and got it published in a pomo cultural studies journal. To this day, some people say that the authorial intent (i.e. to parody) is only half the equation. You can't pull the hoax without pandering to the system, and in the process, you have to engage issues that people care about. Like Jack said, it's a hell of a lot of work.

Rien de le monde is incorrect. In French, it is "rien du monde"