I saw a lot of great photo books at IPL's Photolucida exhibition a few weeks ago but the one which really sticks in my mind is 27 Good-byes by Deanna Dikeman.

The book is pretty much what you'd expect from the title. It's twenty-seven shots of Dikeman's parents waving goodbye to her from their driveway. 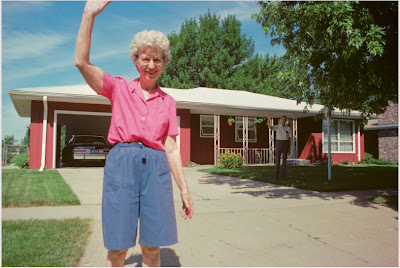 Leaving and Waving, 7/91, Deanna Dikeman
Following in the footsteps of Thirty-Four Parking Lots, the concept is absurdly simplistic, yet quite beguiling. Is it a typology? A pure document without inflection? A collection of personal snapshots?

I think it's this last quality which reeled me in. Dikeman shot every photo right at the moment of parting, and they're quite tender and emotional. These are meaningful records of family.

Most are shot through a car window to give them a sense of impending urgency. Gotta go, gotta get the shot. The way they're laid out in the book —chronologically— also has a ticking-clock sense. The book starts in 1991 at which point the parents appear to be well into their 70s. From there the dates advance with each page. 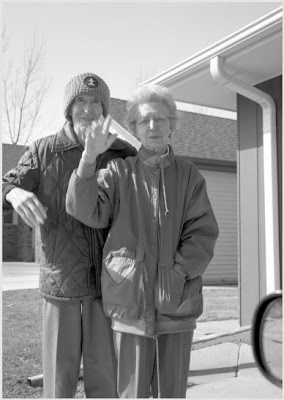 Leaving and Waving, 3/02, Deanna Dikeman
The parents get older and older, yet remain unfazed, standing and waving. By the last few photos it's a bit nerve-wracking to turn the page. How long can they last? Will one or both disappear at some point? 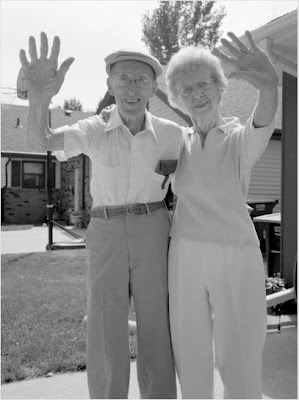 Leaving and Waving, 8/07, Deanna Dikeman
The last photo is from 2009. I won't give away the ending, other than to say it's happy.

27 Goodbyes reminds me of another favorite from last year, Shooting Gallery. There's something about chronological typology that's inherently fascinating. It really gets at the core of photography's nature, its systematic, almost dull, recording ability, which somehow doesn't prevent photos from becoming more interesting over time.

Both books are very casual. There's no pretense, just a collection of snapshots in order, the same thing you might find in any amateur family album. I think this explains their voyeuristic magnetism. We get to look in on someone's private life, but at a safe remove. Then we leave and wave good-bye.
Posted by Blake Andrews at 7:23 AM