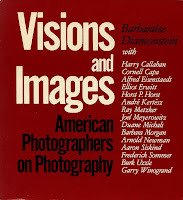 This past week I've been enjoying the book Visions and Images by Barbaralee Diamonstein. If the name rings a bell, it's probably from Diamonstein's Interview with Garry Winogrand which circulated on various photoblogs last year.

It turns out that was only one in a series of interviews with American photographers conducted by Diamonstein in 1981. Visions and Images compiles transcriptions of fifteen interviews, all of them heavyweights. In addition to Winogrand, there's Kertesz, Metzker, Meyerowitz, Siskind, Callahan... the list goes on. They are all available on YouTube, but I almost prefer reading the transcription to the video. I can go at my own pace, and I find here's something almost photographic about a transcribed interview. Like the capture of a scene through a lens, the conversion of video to writing mediates directly without altering the essence.

The interview I found most intriguing was with the elusive Elliott Erwitt. Talk about a reluctant guest. His answers are so evasive you'd think he was running for office. Time and again Diamonstein lobs probing questions at him, but he refuses to field any of them. It must've driven her crazy.

At first it put me off. I thought, why won't he just answer the question? But the more I read, the more refreshing Erwitt's attitude was. Here was a photographer who wasn't afraid to say "I don't know". It seems the perfect counter to today's culture of specificity, in which photographers are expected to plan out their projects top to bottom and be ready to explain them in a concise three paragraph spiel. For many photo projects nowadays the explanation often takes precedence over the images. You read the artist's statement and you don't even need to see the photos.

Erwitt is the antithesis. Photographs before theory. Can you imagine any of today's hot young photo stars being brave enough to give answers like this?

Diamonstein: What are really saying [in your photos] about the whole question of personal identity?

Erwitt: Gosh. Nothing, I guess…

D: Humor is a very central part of your work. I've often wondered how you're managed to skirt that very difficult line between humor and sarcasm.

E: I wish I could answer you. I don't worry too much about things like that. I just do what I do, without thinking too much.

D: What are the strategies you use to achieve the results we see in your work?

E: Well, let's see, strategy….I do take pictures of dogs and I bark at them sometimes. But that's really to attract their attention more than to convey a message to them.

D: When did this "humanist" wit begin to emerge in your work?

D: [John Szarkowski] has said that you're known for almost confusing understatement in your photographs; that they deal with the empty spaces between happenings, and with anti-climactic non-events. [He] callsl them anti-photographs. What do you mean by that, and what do you think he means?

E: Well, I don't know what he means, but it sounds good to me. As for anti-photographs, I was looking for a catchy title for my book, and a copywriter friend suggested it. He explained what he thought it meant, but I've forgotten.

D: What advice would you give to a you or beginning photographer? Is there any special schooling, or any special technique that you would suggest?

E: No, my only suggestion would be to develop interests and pursue them -- nothing more.

D: There are certain recurring themes ini your work. We've talked about dogs, but we haven't talked much about beaches. What is the constant attraction to the beach?

E: I'm very often by the sea or the waterfront, and I find that's a good place to take pictures. Like with dogs, I find the beach is in most places.

D: What do we reveal about ourselves at the beach that you find particularly engaging?

E: I don't know. I just go there and take pictures, and I hope if there's anything to be revealed it'll be in the pictures.

D: I read that during [your father's] long travels away from home, he encouraged you to document the everyday circumstances of your life in his absence. Did that discipline and your diaries have any effect on the way your document the rest of the world now?

D: Did you ever expect your life to unfold as it has?

E: I don't know that I had any particular expectations. I don't look too far forward. I just live as it comes. I don't have any particular projections. Actually, you got me to talk about my projections for books. I don't think I've ever thought that far in advance.
Posted by Blake Andrews at 8:07 AM

Thank you. This is EXACTLY what I needed today.

Imagine if there was some kind of medium that could somehow show what he can't seem to verbalize!

So many photographers anymore always talking about the "deeper meaning" of their photos often leaves me feeling like I'm missing something.

Made me laugh out loud. he was giving nothing away! Great stuff. But the last answer was that classic fear of the creative person, that if you try to examine the creative process too closely, the magic will cease to happen. It's almost like a superstition. . .
Jon, who can't remember his google account password!

I don't know why anyone would even attempt to read more in to his photos than what is in front of your face. His answers were very appropriate.

I don't go for this kind of passive aggressive bullshit in interviews. Reminds me of rockers from the '70's. It's mean-spirited. He knew very well what kind of questions she would ask beforehand so he should not have consented to an interview if he didn't want to be interviewed. He could have made the point that the pictures "speak" for themselves in a thoughtful and interesting way but chose not to. Really obnoxious.

I guess Erwitt deserves a little heat for messing with Diamonstein. I think part of his motivation might have been that she's not a photographer and her questions have a certain hollow tone to them. I think I would be angrier at him if his answers weren't so darn amusing. What's more, they seem very appropriate to his visual style.

Winogrand had a similar approach to Diamonstein but he laid out his philosophy with more clarity. Deliberately obtuse out of necessity, not out of playing any games.

Actually I think all the interviews in the book reflect the visual style of the artists. Duane Michals is very metaphysical, Meyerowitz speaks and photographs like a fine essayist, and so on.

Just found this quote on Ian Aleksander Adams blog which seems to fit nicely with this topic:

Great quote! Thanks for that. I hadn't seen that blog before.
It feels to me like the legacy of conceptualism is basically fear. Fear that unless you can fully justify intellectually what you are doing, then you aren't doing Art, or your work is not valid somehow. . . You have to get your 'intellectual rigour' badge first. . .
Jon

Found this through tumblr. Photographing with your gut first, and maybe then trying to give a meaning to why you did what you did. Instead of working out a project and then trying to fullfill that. I've tried both, but feel most succesful and liberated and original when I can do it the first way.
Great post on how you can interprete a mans art to death. When all you have to do is look, I guess.