Opening Ceremony. With much pomp and circumstance, photographers are formally introduced to the public. Special one-time only clothes are worn by participants as they make the obligatory circle through the gallery smiling, waving, and gladhanding, only to arrive afterward exactly where they started. The crowd ranges from high-ranking dignitaries to common gawkers. This is a powerful moment because at this point the future is unwritten and anything is possible! If the opening is successful, the artist's torch is lit and shines brightly for the next four years.

400 Meter Darkroom Door Hurdles. Photographers race around an oval track with revolving darkroom doors placed at 20 meter intervals. Contestants must run through the doors as quickly as possible without knocking them over. 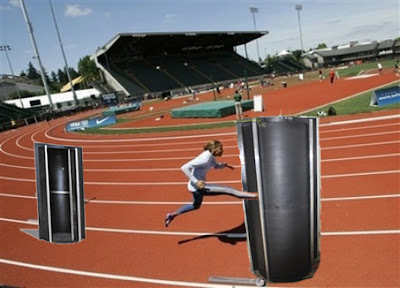 Biathlon. Photographers travel through a series of stations using cross-country skis and carrying an SLR mounted with 500 mm lens. At each station, photographers stop to shoot at a distant target. Points awarded for time and shooting accuracy. 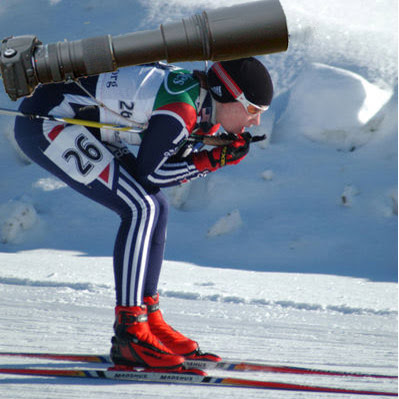 Photographer's Biathlon
Technology Jumping. Photographers on skis attempt to jump as far as possible over a pile of obsolete gadgets from last year.

Weightlifting. Photographers place all their camera gear in a pile, including both working and broken equipment, then attempt to lift it above their heads. Unlike normal weightlifting, contestants are not allowed to throw down the weight after lifting. Gear must be set down gently, and points are deducted for dropping or damaging any equipment. 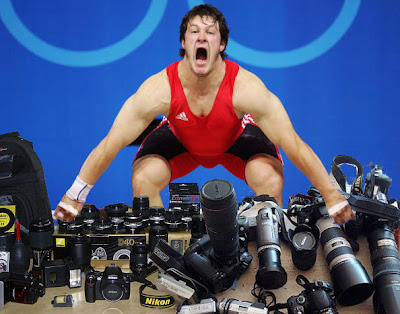 Monopod Javelin Throw. Photographers throw a monopod mounted with continuously shooting camera as far as possible. Points awarded for distance and for best shot taken by the camera while airborne. 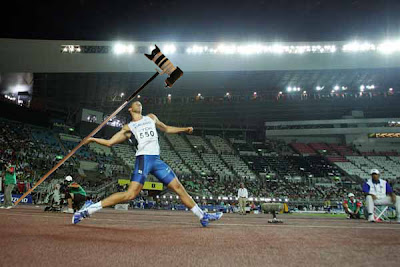 Monopod Javelin Throw
Portfolio Review Gymnastics. Photographers compete in a series of floor exercises including jumping through various hoops, reaching for brass rings, and swinging on bars which are set progressively higher. Competition is judged by a panel of inscrutable and seemingly capricious officials.

Marathon. Contestants devote themselves to a shadowy, misunderstood, financially draining craft. They pursue it like an addiction day after day, year after year for the bulk of their adult lives. Points awarded for sheer endurance.
Posted by Blake Andrews at 8:18 AM

Y'all see that video where that white boy fell of the side of that lugey slide? I feel so bad for his mama having to watch that on national tv. Mmph.

Awesome post man. Had me laughing the whole time.

LOL! gold, silver, bronze, copper, aluminum, tin, iron, rocks of any kind. a photographer's trophy dreams come true.
as we all know, there are photographers and athletes who are better than what will ever be seen on the media.

Photographers maybe but athletes? It's hard to imagine there are Olympic level athletes hiding out somewhere being denied their shot at glory. Sports are the most pure meritocracy of any human pursuit. Photography on the other hand...?

i'm thinking of the "natural athlete" who has amazing skills but doesn't (or can't) enter into world class competition. It is an economic issue; for example, a highly skilled athlete who isn't groomed for greatness and doesn't have dreams of Olympic fame because they are selling trinkets and gum on the streets in order to support their family. Their sport is their passion. (My comment is informed by a physical ed teacher in Mexico City.)

this is so great! camera gear weightlifting made me laugh so hard..

Just getting started in photography, EditElf.com has give me a huge advantage over well established photographers. I don’t have to buy expensive editing software,learn all the tricks, and waste time on my computer. I started shooting weddings because I love photography and I love people, so that’s what I spend my time doing!
Edit elf

I've never had the opportunity to be at an sport event of these, but when you have the chance to go I will not hesitate, because I love my sport

Hello .. firstly I would like to send greetings to all readers. After this, I recognize the content so interesting about this article. For me personally I liked all the information. I would like to know of cases like this more often. In my personal experience I might mention a book called Generic Viagra in this book that I mentioned have very interesting topics, and also you have much to do with the main theme of this article.