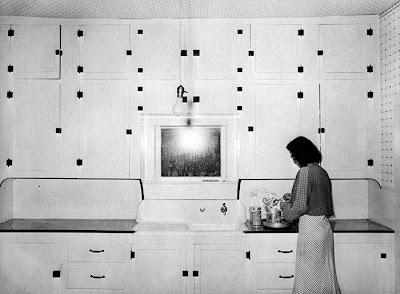 Hidalgo County, Texas, 1939, Russell Lee
My favorite thing about this image is that it looks so different from other Russell Lee photos. Nothing against his work. In fact I'm a big fan. But virtually all of his photos --what I've seen anyway-- are more humanist than this. He was one of the original "concerned photographers" even before that was a term. Ramshackle towns, creased cheeks, that sort of thing.

In the context of his other work, this image looks like an alien spaceship. All those hinges! So chic, so modern, so factual. I'd be less surprised to see this photo in Sultan/Mandel's Evidence rather than Russell Lee: Photographer, which is where I did find it. Doesn't it look like some premonition? Evidence of the future?

Sometimes photos will do that. Kid photos mostly. You look at a snapshot of your 7-year old and you can instantly see what he'll look like as an adult, but when you look straight at him you can't tell. The photo serves as crystal ball.

I think that for Russell Lee this was that sort of photo. I'm not sure he knew what he had but he must've known that it looked different, and that was enough.
Posted by Blake Andrews at 9:08 AM

I always liked this one. I got a very decent 8 x 10 B/W print (I presume from the original neg or very good copy neg, on double weight air-dried glossie) of this image from the Library of Congress for about $10 a number of years ago. It is quite a bit more now but still very cheap.

Your taxes at work in the community.