Last week exploring the stacks at the U of O library I stumbled on some pre-color work by Roger Mertin that was new to me. Back in the late 1970s Mertin made a project shooting basketball hoops. 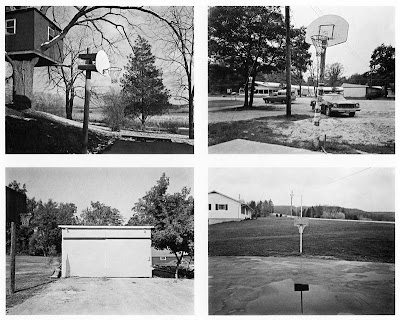 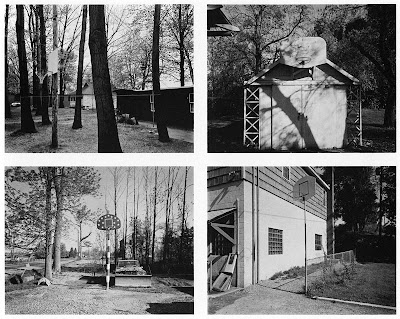 from Roger Mertin Records 1976-78
I've long thought about doing such a project myself. I can't walk by a hoop without shooting it, and the thing is they're Everywhere. Maybe in other parts of the world it's different. Maybe you have soccer goals or tennis courts or tetherball? In America we have millions of hoops. They're in parks, driveways, gyms, garages, cul-de-sacs, private spaces, public spaces, rich neighborhoods, poor neighborhoods. They're so ubiquitous we barely notice them. And the best part is each one is unique, as Mertin's photos show.

There's another reason I'm attracted to hoops and it's more personal. From an early age basketball has been a constant in my life. I started playing when I was around 8 or 9 and I've kept at it ever since. I still play a few times a week at the local Y. I spend a lot of winter nights watching games on TV. Truth is I'm a basketball junkie. In comparison, photography is a latecomer in my life. 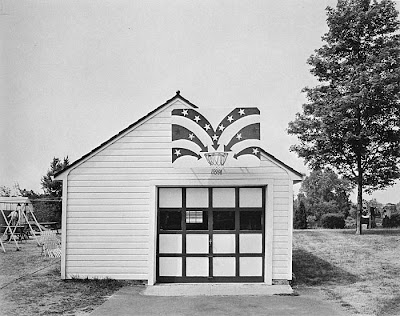 Webster, NY, 1977, Roger Mertin
I've done enough of both to think there are some parallels between basketball and photography. Both are essentially mental. To excel you need to be in the right flow, the right rhythm. There are times playing basketball when everything seems to go right. I take a shot and I don't even need to watch because I know it's good. Other times my game is out of whack. I make stupid plays without knowing why.

I get the same feeling shooting photos. Sometimes I walk around and it seems like photographs are everywhere. My eyes are active, my vision is on. I take a shot and I know it's good. Other times photography is a struggle. It feels like I'm forcing shots to happen. It all depends on good mental flow.

In both pursuits a certain level of thoughtlessness is central to success. Not thoughtlessness like carelessness but like zen. You can't sit there too long and think about the shot. It just has to happen by itself. Sometimes on the basketball court I'll find myself doing things without any planning. And a few seconds later running down the court I'll wonder "Why did I just to that?" because there was no thought involved so --just as in a breakthrough photo-- the cause is difficult to trace. And in fact there is no thought involved, just flow. 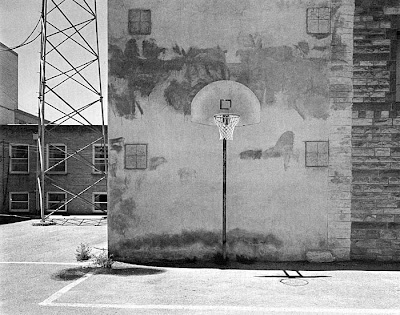 Wyoming, 1977, Roger Mertin
How do you turn that flow on? That's the $64,000 question to which no one knows the answer. "If I knew how to take a good photograph, I'd do it every time," said Doisneau. The same goes for basketball. There are many pro players who know how make a good basketball shot, yet none who do it every time.

No one is perfect and that's beautiful. Wouldn't it suck to make every shot? Life would be a bore. Photography would be pointless. Basketball would be pointless. Part of the charm of both skills is that it makes us confront our imperfection. How do we come to terms with it? Photography, basketball, life... It's all one big self exam.

The only certainty is that 100 percent of shots not taken never find the goal.
Posted by Blake Andrews at 8:34 AM

Nice essay...these photos sort of reminded me of another series of basketball hoop photos, by Chicago photographer David Schalliol:

I am completely fascinated with the concept of flow. Have you ever read Zen in the Art of Archery?

This is also an interesting read: http://www.guardian.co.uk/sport/2009/jul/26/sports-psychology-choking