I have enjoyed a number of photo talks over the years but I have to say that Larry Sultan's lecture last spring at the U of O was my alltime favorite. He was at the peak of his game and he absolutely nailed it. His talk was a mental hit and run, and for a few days afterward my mind still buzzed with all the thoughts and images he'd brought forth. What the heck was that? Did anyone get the plates? 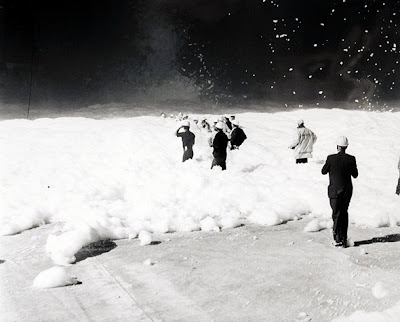 Larry Sultan goes to that great gig in the sky
Photograph from Evidence by Sultan and Mandel
Strangely few others seemed affected. The talk had gotten zero publicity. Most of the audience was composed of photo students dragged there on assignment. He'd given a similar lecture in Portland the night before but I don't think it stirred much interest there either.

Ironic, isn't it? In an era when flavor-of-the-week celebrity chumps are paraded on magazine covers around the globe, someone like Larry Sultan flew under the radar even within his own field. That's art photography in a nutshell. Not much glory.

I saw Larry Sultan speak in Toronto around five years ago and it was definitely one of the most inspiring talks that I've ever seen. I think about it a lot, and I just realized that I measure every lecture I've seen since then, against Larry's. I had no idea he died, I'll miss him...

In a nutshell...wish I coulda heard and savored one of those talks.