It's hard to overstate the historic influence of 1975's New Topographics show at George Eastman House. The show crystalized a seismic shift in landscape photography which is still reverberating more than three decades later. What's more, the show was amazingly perceptive in predicting future stars at a young age. Adams, Baltz, The Bechers, Deal, Goehlke, Nixon, Shore, Wessel. All have gone on to become superstars but at the time they were what we nowadays would call emerging artists. To collect them all in a bunch back then is like having a rookie card with Williams, Dimaggio, Robinson, Mantle, Musial, and Satchel Paige all in one.

As has happened with other cultural artifacts from the seventies, the thirty year itch is now beginning to kick in. A newly curated retrospective is on its way around the world. Blogs are beginning to give shoutouts. At the end of the month, Steidl will publish a book dealing with the show and its aftermath. 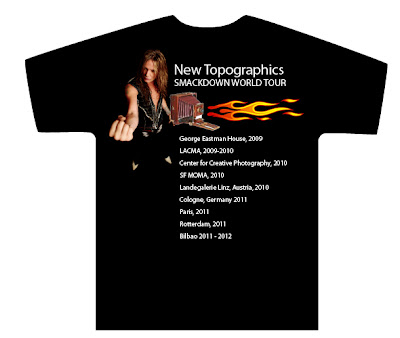 New Topographics, Baby! Coming to a gallery near you...
The original show catalog is long out of print and it will cost you several hundred dollars to track it down. For those unable to find a copy, Steidl's new book will indeed be welcome. The only risk of the new publication is that, as with so many new constructions from music CDs to buildings to photobooks, there is a danger that history will be paved over in the process of reinterpretation. For those curious to see it, here is the original catalog in its entirety.

(Catalog images have been removed at the request of George Eastman House. Sorry.)
Posted by Blake Andrews at 10:10 AM

I need one of those T-shirts.

I imagine that if you go to one of the shows and hang out in the parking lot afterward there will be vendors selling them.

great post! very informative for me...wasn't familiar with several of the photographers' work.

Thanks, Blake, had never seen inside that one. Shore's colour was a bit of a blessing after all that homogeneous b&w.

do you happen to know if the show is traveling to the east coast?

The show started last summer at George Eastman House in Rochester. As far as I can tell that was the only east coast appearance.

I find it dis-spiritingly predictable that the GEH would ask you take those images down.

Now, of course, the perception is that a posting of average quality, low-rez scans from poor quality source material is in direct competition with the shows and the Steidl book.

And the GEH may be right.

Given my steady loss of real income over the last ten years, I can no longer afford to pay to see shows at museums, nor can I afford to buy books anymore. And now, having seen those average quality, low-rez, poor source images, I have no reason to see the shows or buy the book.

And as we slip steadily back into a third world nation, it makes sense that an educational organization like the GEH should fight over every single penny they can extract the public who may be interested in what they have to offer.

Cause there is no money coming from anywhere else anymore to fund art.

I'm not convinced GEH's motivation was financial. I suppose that may have played a role but I think it was more a straight case of copyright protection.

But in any case your point about money limiting one's access to work is well taken. For many many out of print photo books, the only way to see them is to pay through the nose. There is no low-cost or free digital version available.