I belong to three photography groups which meet monthly to share work and talk shop. These are Lightleak, Portland Grid Project, and Eugene Grid Project. I generally look forward to these meetings since photography can otherwise be a socially isolating activity. I shoot alone. Very few non-photographers understand what I do. To really push forward I need to connect with other photographers. Although this is possible through the web, it isn't the same as being in the same room talking with real people and looking at physical prints. 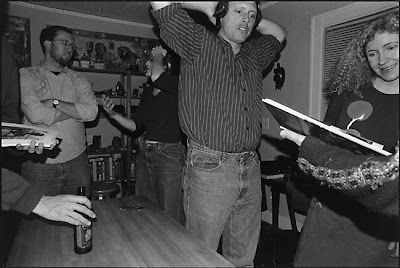 Lightleak, 2005: (L to R) Chris, Lyla, George, Lisa
I usually bring 50 or 60 work prints to each group, with virtually no overlap between them. Each photo gets shown only once to one group or another. Whatever meeting happens to be next sees 50 or 60 new ones. The next morning they go into a box in my office. Sometimes I show that work here as WTD? but for the most part I'm not interested in showing it online.

Of my three groups Lightleak meetings are the most informal. We meet in an old warehouse. We know each other pretty well. We drink. It can go late. Photographs are our sustenance. These are the best photographers I know and it's always interesting to see what they've been up to. They shoot film. Very little of it winds up on the web. The only way to see their work is to make the meetings.

We always begin Lightleak by looking at photo books. People bring whatever books they've acquired or borrowed recently and we sit around and browse them, and kvetch or praise. A few months ago I brought Lay Flat's Issue 01. We spread out all the photos on the table and had a look. The hands down favorite among our group was this photo by Richard Barnes. I'm not sure why, whether it was because he was an older photographer or because it was the only b/w photo in the batch or what. 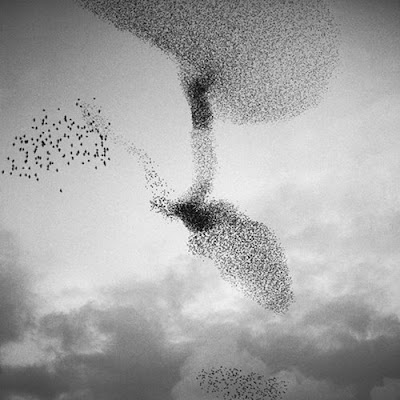 Murmur 21 Nov. 26, 2006, Richard Barnes
After we look at work by others we show our own, generally by laying work prints on a large table. Everyone walks around at their own pace pointing out favorites or discussing photography or the game last night. For Lightleak I do it a little differently. I put my prints in the order I want them seen, create a small stack, and send it around the room. It's like a little unbound book of here's-what-I saw-last-month.

Looking at photos this way is qualitatively different than looking at them spread on a table, or on some website where they last forever. You can't linger. You see a photo for a moment, then it's gone to the next person and into your memories. I think showing photos this way mimics the nature of seeing them. You walk around for a while, nothing happens, you shoot a bunch of crap, then BINGO you catch a moment. A second later it's gone forever. That's reality, and that's how I like to show my photos. 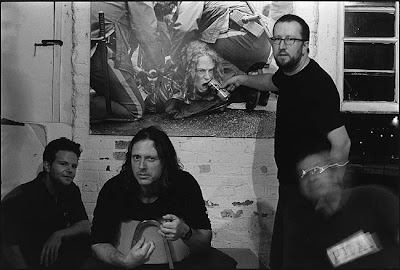 Lightleak, 2008 (L to R):
Bryan, Faulkner, George, Screaming arrested guy, Chris, Blake
Occasionally my groups engage in a portfolio swap. We each pick an image, create enough prints for the group, then pass them around. Everyone winds up with one print from everyone else. I've just done two of those in the past few weeks and they're great! I wound up with some fantastic work. Real live prints, not jpgs.

I tried to initiate something similar last year through my blog. I proposed a giant print swap but it didn't really get off the ground. I think one reason that it failed is that it was an internet-only enterprise. None of the photographers had physically met. There was no real-world rapport to serve as swap infrastructure.

I think this gets at the difference between groups which meet physically every month and ones which exist only on the internet. I belong to a few internet photography groups. We share work. We discuss things. We sort through logistics. We can do all of this 24/7 instead of just once a month. But the weird thing is I've never met any of these people. I've never seen any of their work except on a screen. I don't know their voice or their smell or their signature, and I suspect that will always be a limitation. The irony is that here I am publicly relating my thoughts on this to a bunch of strangers in a blog post.

In the end there's really no substitute for being in the same room talking with real people looking at physical prints the way it's been done for years. I look forward to that every month.
Posted by Blake Andrews at 7:22 AM

Blake, if you can ever get the on-line print swap off the ground, I'm game. I suspect it's a lack of trust of virtual strangers. I sort of understand that but it's too bad.

Hey, I offered and even made the print. It's still sitting in its print box with its siblings. Don't know why we never connected locally.

Blake, yes I agree.. Documenting the "progress" of Lightleak somehow would be ideal... More swaps, I'm still willing to send a 2" square image from over here on the East coast if necessary.. Just let me know.. I'd love to come back and sit in on another meeting...Let me know when the Lightleak blurb will be out... Maybe I can submit...I agreee that a group can be a great way to get perspective on ideas...

The next morning they go into a box in my office. Sometimes I show that work here as WTD? but for the most part I'm not interested in showing it online.