Photoephemera recently posted an old review of Robert Adams' The New West which I found pretty fascinating. The review is from an issue of Popular Photography printed in 1974 just after the book was published. 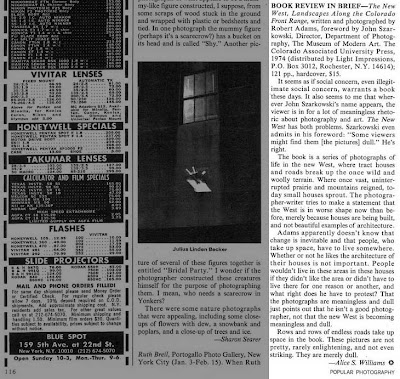 "People wouldn't live in these areas in these houses if they didn't like the area or didn't have to live there for one reason or another..."

Then Williams takes on Adams:

"What right does he have to protest? That the photographs are meaningless and dull just points out that he isn't a good photographer, not that the new West is becoming meaningless and dull...Rows and rows of endless roads take up space in the book. These pictures are not pretty, rarely enlightening, and not even striking. They are merely dull."

Ouch! Now that is what you call a negative review. Nevermind the fact that I totally disagree with it. When I read that it jarred me, I think because it is so rare nowadays to encounter negative reviews. 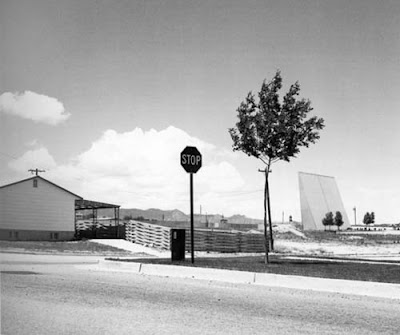 "Rows and rows of endless roads take up space in the book"
This is the age of reference and, it seems, reverence. The internet is awash with links and recommendations about all sorts of photographs, most of them glowing reviews. Surely they can't all be great. Where are the links which say, "This work sucks. Avoid it."? I know such work is out there but if such reviews are I haven't seen them.

Perhaps some of it is due to the fear of winding up on the wrong side of history as Williams did, or Hilton Kramer with his infamous pan of William Eggleston's MOMA show:

"Perfect? Perfectly banal, perhaps. Perfectly boring, certainly...He likes trucks, cars, tricycles, unremarkable suburban houses and dreary landscapes too, and he especially likes his family and friends, who may for all I know be wonderful people, who appear in these pictures as dismal figures inhabiting a commonplace world of little visual interest."

There are probably many people still who find Adams and Eggleston boring but few would dispute their contributions to photography. So that may be part of it, the fear that a negative review will be remembered later as an example of sciolism. 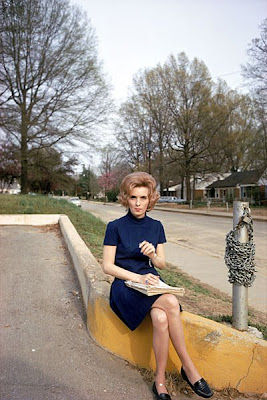 "A commonplace world of little visual interest"
But I think the larger reason is that the photography world is an informal pat-on-the-back society. If you plug my photos I'll plug yours. Or I'll show my photos in your gallery if you write something positive. It's one big happy family so long as no one rocks the boat with a harsh critique.

Great, but that doesn't change the fact that not all of the photography out there is exciting. Surely some of it must rub some of us wrong. Let's write about it.

"Reeks of trivial high school melodrama"
Which brings me to Jeff Ladd's recent lambasting of Nan Goldin at Arles, probably the most negative photography critique I've yet seen online. I think it took some guts for Ladd to post this. Goldin's star may not be as bright as it once was but she's still Nan Goldin, one of photography's few undisputed superstars. Mr. Whiskets comes out swinging:

"Unfortunately there was NOTHING in this installation that did not reek of trivial art school melodrama - from the use of religious imagery and paintings that opened the show, to the bad videos that littered the screens. The most infuriating of all is that Nan's incompetence at creating anything beyond cliche was actually an offense to the memory of her sister..."

Whether or not you agree with Ladd you have to credit him with an honest appraisal which pulls no punches. The blogosphere could use more of these. Otherwise it's just a sea of warm feelings. The doldrums.

So let's hear it. Tell me what you don't like. If a certain body of work bores you, let it out. If you think this post is full of shit, tell me. If you know of a particularly eviscerating review somewhere on the web please pass it along. Stir the pot. Create some waves. Celebrate the negative.
Posted by Blake Andrews at 7:23 AM

Nice Blake. I agree. I tend to keep my mouth shut in public because I don't want to create negative vibes around what I'm trying to do. Also, the web breeds a tit for tat culture, and people often tend to make everything personal.

I'll nut up and say that I don't really like Brian Ulrich or Susana Raab's anti-consumerism work. I find it dull and pretentious.

Jorg Colberg has had some sharp criticism of photojournalism and the Nactway.

I do wonder about the thirst for more criticism. I think there's a risk of it turning into a brow beating contest where people might start tearing apart work simply out of spite or too boost their own ego.

I think the best criticism attempts to open up a wider philosophical dialogue and avoids attacking for the sake of attacking.

a negative critique usually says more about the critic than about the photography or photographer. For instance, what does jeff ladd know about nan goldin's sister? Maybe she was a high school melodrama queen living in a stereotypical world of cliches, and then the photo installation would have been on the money. And truly, his insult of nan's project is more insulting to the sister's memory than the project itself could ever be. Work like robert adams's that especially at the time was so esoteric and anti-mainstream, would definitely ruffle the feathers of the average american who supported suburbs and typical-looking art. Just the fact that the critic expected the pictures to be pretty showed that she didn't even begin to get it. I would guess that Mr. Adams expected a review exactly like that, and probably got 100 more singing the same song.

If your work appeals to everyone, it's probably not too unique, and certainly not very deep.

I think that we have to make a distinction concerning the subject of criticism. I mean that there is a difference between art as a way of saying something about your personal story (as a hobby, as an amateur or as a form of seeking recognition) and art that is marketed as a masterpiece. In the first case i think that criticism is pointless unless if asked from the artist but in the second case it is unacceptable to silence and allow trash to be marketed as masterpieces.

Just kidding, but trying to help my own point. I guess what I'm after is honest criticism. Critiques that are not necessarily nasty but that get around the generic "Nice work" reference. Many of the blogs which tend to reference third-party sites such as Conscientious (notwithstanding the Nachtwey link), Lenscratch, or Photolucida do so cloyingly pleasant terms.

Granted this makes sense because typically they're going to link to photographers they already like.
But where does that leave the work folks don't like? When does that get discussed? In back rooms or over coffee between friends maybe but not online.

Thinking about it more, maybe this is another fundamental way the internet has altered discussion patterns. Since it is so permanent and so public, certain topics are less likely to come up there than in real life. Thinking out loud here...

It does seem that there is more one line praise (this rocks!) and that is nice but not particularly enlightening. One line criticism (this is boring) is less common but equally shallow and downright thoughtless in every sense.

Regardless of the stature of the artist, criticism should be done with care and respect. This means a well reasoned discussion of merits and problems, which takes time and effort.

Criticism means sticking your neck out. Praise and no one questions; you may have gained a friend. Criticize and you are vulnerable. If your facts aren't right or your argument isn't well formed, you face derision and ridicule.

In the big leagues critics face some pretty formidable sales and promotion talent and reaction from those invested in an artist's work. Could this be why so much art criticism is convoluted theorizing leaving you asking the question, yes but did you like it? In the minor leagues it means possibly hurting someone's feelings, even if the criticism is meant to be constructive.

@MZ: In the big leagues on the internet people don't hide behind anonymity.

Anonymity on the web died in 2005. Anyone that doesn't link back to a respectable social profile isn't worth listening too, I don't give a shit about whatever argument you make about 'the ideas being more important than the personality.' Get with it and establish yourself.

Ok, criticism in all art forms bores me. I can't stand listening to intellectuals get high on themselves by deconstructing art. It's a social game of 'I'm smarter, more informed, more educated than you, so fuck off.'

I hate that shit. It's a power struggle for righteousness and influence.

People enjoy the music they enjoy, most of them don't pull out their hair about the shit they hate. The same goes for photography with me.

If you want battle with people about photography over whose smarter, more educated, more sophisticated, more witty, go ahead.

I'd prefer to shoot the shit with the down to earth people who photograph simply because they love it, not because they need to establish themselves in any sort hierarchy.

Photography is like music, an art that's with us daily, we like some of it, we don't. Let's not push it into the corrupt, ugly, narcissistic, art world where everyone is out to make a buck and prove how fucking cutting edge they are...

I'd classify that comment as an honestly worded negative review

I completely agree with BryanF's last comment. I'm utterly over critics. I don't need someone to tell me what I do and don't like based on some miscellaneous comparison with whatever obscure piece of work was fashionable that week. As people's taste changes daily, the criticism of the hour is obsolete by the next. Some photo's I took last year that I hated I now quite like and vice versa. Just do what you like. There is nothing wrong with art for the sake of art. It all doesn't have to carry some earth shattering meaning or message.

"I don't have anything to say in any picture. My only interest in photography is to see what something looks like as a photograph. I have no preconceptions." - Garry Winogrand