As regular B readers know I have a deep affinity for satire, absurdity, and artists who can laugh at themselves. When I saw this fake newspaper blurb last week in Vik Muniz's book Seeing Is Believing, it really hit the spot. The idea of a park banning photography to foster the sale of its own postcards is just close enough to the truth to be hilarious. 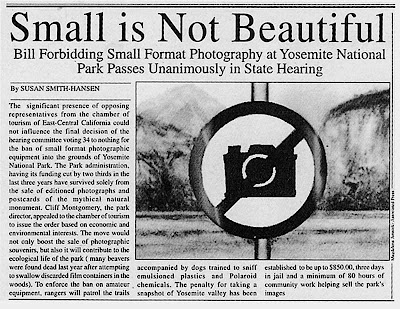 from Personal Articles, 1996 by Vik Muniz

"The significant presence of opposing representatives from the chamber of tourism of East-Central California could not influence the final decision of the hearing committee voting 34 to nothing for the ban of small format photographic equipment into the grounds of Yosemite National Park. The Park administration, having its funding cut by two thirds in the last three years has survived solely from the sale of editioned photographs and postcards of the mythical natural monument.

Cliff Montgomery, the park director, appealed to the chamber of tourism to issue the order based on economic and environmental interests. The move would not only boost the sale of photographic souvenirs, but also it would contribute to the ecological life of the park (many beavers were found dead last years after attempting to swallow discarded film containers in the woods).

To enforce the ban on amateur equipment, rangers will patrol the trails accompanied by dogs trained to sniff emulsioned plastics and Polaroid chemicals. The penalty for taking a snapshot of Yosemite Valley has been established to be up to $850.00, three days in jail and a minimum of 80 hours of community work helping sell the park's images."