Just one more comment about passports and then I promise I'll stop. Compiling my brief history I'd scoured the web for passport images. I found a few but unfortunately I'd missed the motherlode. It wasn't until after the post that Mark Michaelson —aka leastwanted— sent me a link to his Flickr page of antique passports from all over the world. 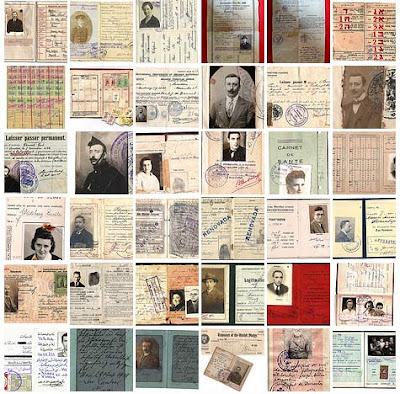 Assorted passports from Leastwanted's Flickr site
But passports are just the tip of the iceberg. Leastwanted's full set of images compiles hundreds of badges, medical photos, and other miscellaneous documentary images. The common thread is that none of the photos was originally conceived of as "art" and so they offer a relatively unfiltered view into the past. The primary focus is mugshots, many of which were published as a book by Steidl in 2006. 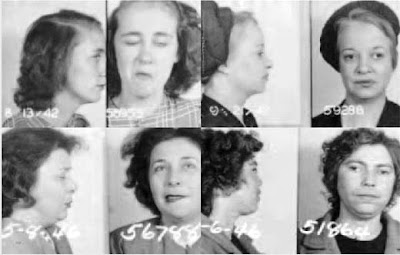 from Least Wanted: A Century of American Mugshots
by Mark Michaelson and Steven Kashner, 2006, Steidl & Partners
For anyone interested in found photos, Leastwanted's Flickr site will become a mostwanted bookmark providing days of browsing pleasure. Any future histories of passport photographs should include it.
Posted by Blake Andrews at 7:28 AM

I've enjoyed looking at the Least Wanted photos online, but the book is really superb. For some racier and campier found photos, check out http://retrozone.tumblr.com/

hi blake. thanks for the beautiful write up. keep up the good work.
mark (least wanted)

Great Post Blake. I am teeing up some questions for Mark about his mugshot images. I really like his style. The JUSTICE Art Installation was something special too. Good to see a quirky photo curator exhibit with quirky street artists.

You could get lost in the world of passport photos.

Passport photographs are always impressive and tell so many stories. I have a large amount of these with the actual faces removed - the detrious of the passport photograph which you may (or may not) find of interest at: http://pentimento.squarespace.com/journal/category/-booth